Losing Eden: Our Fundamental Need for the Natural World and Its Ability to Heal Body and Soul 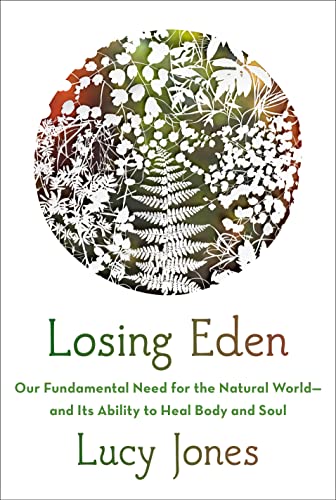 “The Hero myth—the drive to seek safety, control and power over the Earth—that has powered Western capitalism and civilization has gone too far. We have taken too much and set patterns in process which are winding up in disorder.”
—Lucy Jones

In Losing Eden British journalist Lucy Jones makes the case that our broken connection with the natural world contributes to mental illness on both an individual and collective level, and that renewing that connection, which our indigenous ancestors lived, can restore our mental well-being and curtail our destructive exploitation of planet Earth, our home.

Jones bases her argument, in part, on her own recovery from chemical addiction through a therapeutic program that included frequent engagement with the natural world. She expands on her personal experience through research into various ecological health movements and scientific studies that have explored the relationship between mental health and interaction with the natural world. She sees in society’s addiction to a never-ending consumerism an extension of her unhealthy dependency, and offers love and respect for nature as the cure for both.

Her book moves toward a discussion of anthropogenic climate change, its moral implications, and the phenomenon of mass grief over the realization that humanity may have irrevocably fouled its own nest. The just released report from the UN’s Intergovernmental Panel on Climate Change confirms that we are doing precisely that.

Jones’ discovery of the therapeutic role of nature in her recovery led her on an eight-year quest to investigate the various ways in which ecotherapy, as it came to be called, was being studied and practiced. In her search for evidence she cast a wide net, interviewing scientists and practitioners, visiting hospitals and clinics, and attending conferences in Europe and the United Kingdom.

What she found was a growing realization in the medical community and among laypeople of the connection between mental health and regular intercourse with the natural world. It was evident from the simple fact that hospital patients whose rooms gave a view of a garden or tree had faster recovery rates than patients whose rooms looked out at a brick wall. At the other extreme, she learned that patients in treatment for severe mental illnesses such as depression, paranoia, and schizophrenia were able to experience serenity and equilibrium while tending a garden for which they felt responsibility. Participating in nature’s cycles of growth, death, and rebirth produces a calming effect on the mind. (In an aside, Jones remarks, “Isn’t it strange that we have become so detached from the natural world that we need that proof laid out for us?”)

The mechanism driving this connection is a biological correspondence between the soil and human physiology that has been embedded in us over thousands of years of evolution. “We are woven into the land, and wider ecosystems, more than we realize,” Jones tells us.

Her argument tracks along a scale that begins with the effects of the human-nature disconnect on the individual—starting with herself—then widens to show its effects on communities and their institutions such as schools and on society at large. It culminates with civilization’s impact on the Earth and its biosphere. At every stage, she finds that a disconnect from nature creates disturbance, while a connection brings wellbeing.

In her discussion of the planetary health crisis that now threatens the stability and sustainability of human civilization, Jones considers the ideological framework that has guided man’s relationship to nature since at least the beginning of the Judeo-Christian era. The doctrine that man is made in the image of God and has been given dominion over the natural world and its creatures has been used to justify an exploitative animus that has played out in widespread ecological destruction and the social inequities of colonialism.

On a more secular level, this mindset has taken the form of a capitalist economic system predicated on the prospect of infinite growth fueled by the profit motive (greed), a prospect that is both harmful and unsustainable, as we are now finding out. These attributes hearken back to Max Weber’s The Protestant Ethic and the Spirit of Capitalism, a work that explored the link between religious doctrine and secular economic activity.

If we accept that our current disconnect from nature stems from deeply entrenched attitudes and assumptions about our relationship to the natural world, how do we move onto a different path? “What will it take to reorder our world to respect the wild, and the species that live in it, both human and non-human?” Jones asks.

Her answer is not a program of reform, but a shift in consciousness that enables us to recover the wisdom of indigenous peoples who saw themselves not as masters of the universe but as parts of a whole that maintains equilibrium through a cyclical process of exchange. She urges us to restore the sense of wonder and awe at the world that a young child feels in the presence of even the simplest of nature’s creatures.

Although there are many practical steps we can and must take to alter our antagonistic relationship to the planet—Jones lists a number of broad ecological reforms we must immediately undertake—the ultimate transformation needed is a spiritual one. We must “fall back in love with the natural world and form a connection.”

A note to American readers. Losing Eden was first published in 2020 in Great Britain. Although the book’s message about individual and planetary health has global relevance, and most certainly applies to the United States, the majority of Jones’s research and examples are drawn from Great Britain and Europe. However, a number of American scientists and practitioners have been consulted, among them the biologist Edward Wilson, and the book’s lessons and conclusions are no less relevant to an American than to a European, or an Asian, for that matter. Much as the COVID-19 pandemic has done, the Earth’s ecological crisis affects all of humanity, and is a grand test of our ability to continue the cooperation that has brought success to our species.