Longing and Other Stories 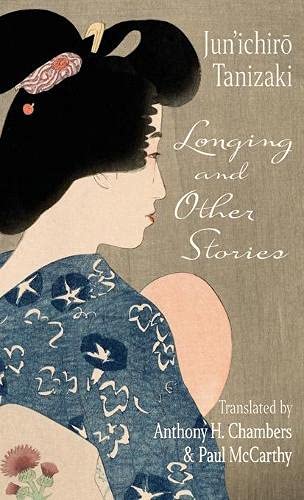 “a kind of master class in voice . . . the world of literature is much richer now that Longing and Other Stories is available for English readers.”

Junichiro Tanizaki is a major writer, one whose works are widely available in translation, so it’s a real pleasure to find these three unknown stories from the author’s early years. Two have never been translated into English before, and the third has only been partially available as part of a Ph.D dissertation. This slim volume collects all three, all from Tanizaki’s first decade as an author, and all deeply focused on the mother-son relationship.

Filial loyalty has a deep value in Japanese culture, one that may feel quite foreign to American readers. The translators have done a superb job, not just in translating the stories in lucid, luminous prose, but also in giving the social, cultural, and personal context for the work in their Afterword.

The stories are all haunting in very different ways and all focus on sons, stand-ins, one supposes, for the writer himself. The first, “Longing,” describes an extended dream, using the kind of imagery that gives dreams their vivid power:

“The sky is heavily overcast, with the moon swallowed up behind thick clouds, and yet, even so, light must be slipping through from somewhere, for outside the house everything is bathed in a clear light. . . . The clear light of the moon shines over the heavens and the earth. And those on whom it shines are all dead. I alone am alive. I alone am living and moving.”

The narrator, a young boy, is searching for his mother, and her absence is a hollow ache within him and the dream he moves through.

The second story, “Sorrows of a Heretic,” has a very different tone. Here the narrator is a young man, Shozaburo, a college student who would rather visit prostitutes than classes, who shows none of the reverence he should to either of his poor, working-class parents, and who callously ignores his teenage sister who is dying of consumption. The language is gritty, earthy, of a completely different texture than the ethereal “Longing.” The writer clearly shows Shozaburo’s faults, but at the same time suggests he has some hidden genius, some latent talent, that would flourish had he only been born into a wealthier family.

“If he too were the son of a rich family, he probably wouldn’t have turned into someone who was shunned and despised by his friends. The cause of his relative weakness came down to the question of money. If only he had some money, he’d be in no way inferior to them, whether in the breadth of his learning or the quickness of his mind. Indeed, he possessed an artistic genius that they could hardly aspire to.”

The reader, however, sees no hint of that genius, just a cheating, lying, wastrel. Would talent redeem such behavior anyway? Tanizaki seems to think so, if the translators are right in their interpretation that Shozaburo is a stand-in for Tanizaki’s own youth, or at least the poverty he rose from.

The last story, “The Story of an Unhappy Mother,” is told from the point of a view of a younger brother but is really the older brother’s story. Again, the focus is on the mother-son relationship, it’s enduring weight, and the life-long responsibility it implies. The language here is more reflective, pitched between the dreaminess of the first story and the grittiness of the second. Together, the three stories show the power of language in all its tones, presenting a kind of master class in voice and how that affects character and plot. The world of literature is much richer now that Longing and Other Stories  is available for English readers.