The Long Deep Grudge: A Story of Big Capital, Radical Labor, and Class War in the American Heartland 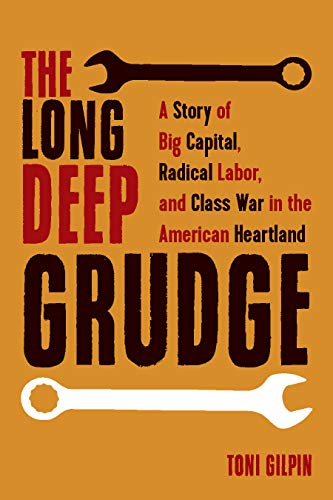 “a worthwhile, engrossing read as an education in one of the most critical parts of United States' history . . .”

American labor is missing from popular American history, except for random bloody incidents that offer no enlightenment. Toni Gilpin in The Long Deep Grudge explores the century of American labor conflict represented by the McCormick/International Harvester Corporation to 1979, the last year "that might have been called a good one" for the American labor movement 20th century.

"That contest had been going, in one form or another, since the McCormicks first opened shop." The company began with hand made parts created by skilled workers who "knew far more about the processes they were engaged in than the managers."

Managers encouraged production but the workers made their money on piece work. "Workers moved independently throughout their departments, as they switched machines, hunted down tools, or took an occasional break." By 1860, 250 employees, in likely the largest factory in the world "turned out more than four thousand machines annually."

McCormick production and profits soared. Industrial Chicago itself went through the same changes, "its booming growth awed even its most avid boosters." The city swelled with desperately poor unemployed, largely from Europe.

Cyrus McCormick took advantage of the labor situation to cut jobs and salaries, although he did not have to, bringing on the violent 1885 strike that McCormick and the hired guns of the Pinkerton Detective Agency lost. "Within the teaming city, union ranks began to grow and revolutionary rhetoric became common parlance."

German Anarchist August Spies, and especially the German workers, became the organized labor answer to McCormick and the Chicago robber barons. So inspired, "in 1886 hundreds of thousands of workers across the country signaled that they were unwilling to endure their dismal circumstances any longer."

These events led to the infamous battle between the Chicago police and organized labor at Haymarket Square. Spies and other union leaders went to the gallows and the conservative American Federation of Labor replaced the earlier unionism in 1886. Corporations "stepped up their use of lockouts, blacklists, and vigilantes." "What followed was a long period of little organized labor activity."

History would repeat itself but on a much grander scale in a new world: a near monopoly of International Harvester, the Industrial Workers of the World (the "Wobblies"), Communists, "the massive strike wave of 1919," race riots, the gasoline powered tractor, the Wagner Act, and new provocations against workers. The McCormick company was always near the center and often at the front of this history.

This story has special relevance today when people increasingly fear the complete takeover of America by powerful corporate interests. "At this moment, with the labor establishment largely moribund, activists are back at the drawing board." Corporate American again labels all discontent as Communist.

In 1979, the author's labor leader father died, a prominent character in The Long Deep Grudge. Gilpin openly admits growing up in an active Union family and the author remains "a little in awe of UAW [United Automobile Workers] workers" and "proud of the mighty UAW" of his youth.

Witnesses to this representative story of the generational struggle between the McCormack company and its workers are few today. International Harvester folded in 1984, due more to corporate decisions over decades than to losses such as the strike of 1979. An American epic had ended but the story continues.

The Long Deep Grudge does not ease the reader into the subject or easily explain its greater truths about organized labor. Gilpin, however, carefully covers each part in simple intelligible bites. It makes for a worthwhile, engrossing read as an education in one of the most critical parts of United States' history of which the average American knows little or nothing. The book includes annotation, a bibliography, and pictures.