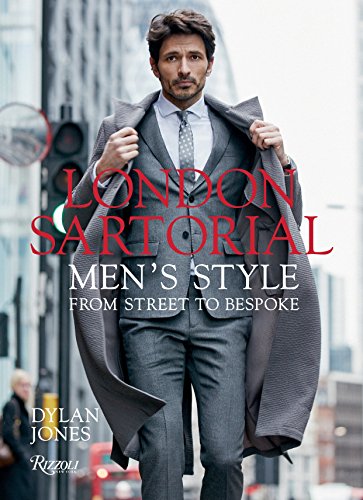 Many a book on the subject of London and its contribution to men’s fashion has been written and expounded upon, but few have found a truly unique way to tackle the topic and stay the course. Dylan Jones attacks the topic from a decidedly original point of view, so if you are looking for a history of Savile Row or of the Carnaby Street from the peacock era ... well, then you are out of luck. This is an educational, entertaining, and astute examination of British menswear.

Jones has chosen to examine this mecca of men’s sartorial habits and quirks via the ever expanding retail topography of menswear purveyors. While doing so he proffers how the merchandise and buying habits, at both the retail and wholesale levels, have evolved since that peacock revolution of the sixties. He explores the rising interest in streetwear as well as the mindset of men whose interests lean toward the of the moment trend-worthy in addition to those who lean toward the more the au courant  of classic styles.

The first half of the book includes a wonderful photographic essay that concerns itself with all the various styles and influences that London offers. The second half includes interviews and a photo essay of sorts that concerns itself primarily with specific designers of London while further focusing on those who show during London Fashion Week Mens. It is here that it should be noted that Jones is the chairman of that event and has been awarded an OBE for services to publishing and the fashion industry.

London Sartorial: Men's Style from Street to Bespoke is a book that speaks to those who have a genuine and profound interest in men’s fashion and especially to those who revel in all things sartorial, especially of the British variety.