Locklands: A Novel (The Founders Trilogy) 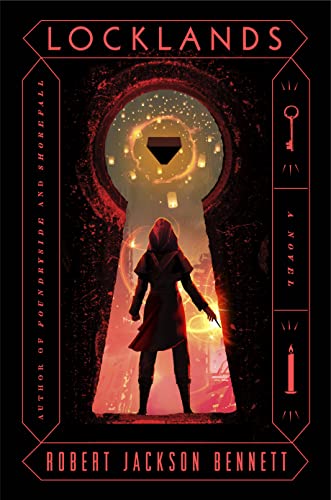 “Locklands completes another excellent trilogy from an author producing some of the most original and compelling fantasy in the genre.”

This is the third and final book of the series that started with Foundryside, one of the best fantasies of 2018. Foundryside was a caper, full of creative heists in a magical world where specially engraved plates can convince reality to behave differently for a while. The second book, Shorefall, took the series into darker places by introducing a villain who alters reality through a different method, one that requires killing hundreds of people to gain power.

If Shorefall was dark, Locklands is even darker. In the time since Shorefall, the villain in this book, a sort of fantasy artificial intelligence called Tevanne, has enslaved most of the population of the world. She controls their minds like puppets and spends their lives indiscriminately to generate the magic she uses to remake the world to her liking.

World-dominating power is not enough, though: at heart, she is a badly damaged person who hates the world and considers it irretrievably broken. She wants to open a door onto the workings behind the universe so she can destroy the world entirely, with the insane hope that if she does, God will take notice and show up to fix his creation and recreate it better the next time around.

The style of Locklands differs dramatically from the story’s beginnings in Foundryside. Instead of heists with creative magical devices, the characters struggle to survive against horrible odds in a world with hardly anything left in it to save. Much of the book focuses on uncovering the truths about ruinous choices made thousands of years earlier that opened the door once before and led to Tevanne existing in the first place.

Locklands is compelling, full of action, and has characters to care about. The protagonists live in a fascinating civilization in which groups of people—sometimes large groups—can join their minds together, creating a single individual with many bodies. Characters like Greeter and Design are composites of many people, with personalities all their own. The novel contrasts this positive concept, where people voluntarily combine their consciences and gain from the experience, to Tevanne’s approach, which uses the same basic idea to dominate and enslave millions.

One of the chief appeals of the first two books was the clever magical system, which allowed the characters to invent new ways of combining the same rules to create brilliant new solutions to problems. Unfortunately, Locklands lacks that appeal, since the magical constructs have become too vast and complicated to have their workings easily described or understood. Magic accomplished by a sigil or two can be explained; magic accomplished by thousands of sigils becomes more like a modern computer program: able to accomplish almost anything and difficult to comprehend.

In fact, Locklands is something of a cautionary fable about the dangers of technology. The magic of the world is very similar to technology, with explicit rules that can build on each other to make ever more complex things. Brilliant people invent increasingly powerful tools to fix the problems around them, but the tools are misused to create different, even worse problems. Ultimately, the tools grow so powerful that the survival of the world itself is at risk. As one character argues, “It’ll just go on. More fixes gone awry. The mad pride of men who think themselves engineers of all creation.”

Overall, Locklands completes another excellent trilogy from an author producing some of the most original and compelling fantasy in the genre.