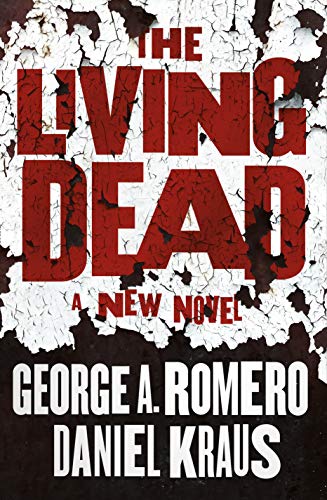 “The Living Dead is the ultimate tribute to a remarkable career. For George A. Romero, that’s a wrap. For the rest of us, we’re once again reminded to ‘Stay Scared.’”

George A. Romero was an icon, an acknowledged master of the horror film genre. Known for movies such as Night of the Living Dead (1968), Dawn of the Dead (1978), Creepshow (1982), and Day of the Dead (1985), he set the tone for the gory, in-your-face brand of scary picture, singlehandedly pioneering the zombie subgenre later exploited by The Walking Dead, World War Z, and many, many other films, television shows, and novels.

As his career began to decline in the 1980s, he became increasingly disenchanted with the film business, spending more and more time transferring to paper the thoughts and images that still filled his head. He frequently mentioned in interviews that he was working on a novel, and in 1982 his short story “Clay” was published in the anthology Modern Masters of Horror.

Which is where Daniel Kraus enters the scene, stage right. A Romero fan, Kraus is an established novelist who co-authored Trollhunters (2015) and The Shape of Water (2018) with Guillermo Del Toro. He’s also the author of the series The Death and Life of Zebulon Finch (2015; 2016), and the novels Rotters (2011) and Scowler (2013).

Shortly after George Romero’s death in 2017, Kraus received a call from Chris Roe, a childhood acquaintance who happened to be Romero’s manager. Roe offered Kraus a chance to finish an epic zombie novel left unfinished by Romero at his death. It was an opportunity he couldn’t let pass, and The Living Dead is its long-anticipated culmination.

When he began the project, Kraus received as a starter kit about a hundred pages written by Romero. After having begun the book, he was given another hundred pages of material from two chapters of an online project called The Death of Death that Romero had attempted around 2000. Then, when Kraus was about 400 pages into the project, Roe sent him a nine-page letter written by Romero that explained his intentions for various plot threads in his manuscript.

It was all grist for the mill, and once the novel was finished, according to Kraus, about one third had been written by Romero and the other two thirds by Kraus himself.

The novel is very long, over 600 pages, and it’s vintage Romero—a gory splatter fest that justifies the filmmaker’s early insistence that he was making movies about flesh-eating ghouls rather than simply undead zombies looking to infect the living.

In fact, the violence and the endless scenes of people being throat-shredded, disemboweled, gobbled, and devoured tend toward pornographic excess after a while. If you’re a fan of this stuff and you have the stomach for it, then The Living Dead is a gold mine for you. If not, though, this isn’t the kind of novel you can read while lying in bed, nibbling on your favorite salty snacks and sipping cream soda from the can. Fair warning.

The writing is a little up-and-down in terms of quality. The opening chapter, in which the very interesting character Etta Hoffman is introduced, is an excellent way to open the book. Apparently written by Romero himself, it’s tight, ironic, and driven by effective characterization.

For most of the novel, however, the prose is bloated and overdone. During actions scenes the eye tends to skim down too-long paragraphs of hyperbole and state-of-mind analysis to find out what the hang is going to happen next.

When Master Chief Boatswain’s Mate Karl Nishimura, for example, gets into a shouting match with nemesis Tommy Henstrom on the bridge of the USS Olympia,

“Nishimura’s roar sounded like the glow had split his face open. For the first time, the glow felt like a glow, an ember that had caught flame and was engulfing him in fire. His lips, curdled by that heat, retracted from snarling teeth. The hiss he heard was the shocked intake of breath from the rest of the crew.”

“formerly as pale as everyone around him, went pink, then red, then kept going, past magenta into a deep, sweaty purple. His hands clenched into fists at his sides and his whole body bore down like a woman giving birth. The result was stillborn: silent fury with nowhere to go.”

This, unfortunately, is just bad writing. Regardless of which man actually produced it.

The Living Dead will stand as George A. Romero’s last work, a final production intended to scan the entire timeline of his zombie universe from patient zero, John Doe, to the bitter end. Would that it had been a tighter, better-written work, though. Gore is gore, and many readers will have an appetite for it, but bad writing stays bad no matter what.

Nonetheless, seamed with social commentary and Romero’s characteristic pessimism about human nature, The Living Dead is the ultimate tribute to a remarkable career. For George A. Romero, that’s a wrap. For the rest of us, we are once again reminded to “Stay Scared.”