Little Princes: One Man's Promise to Bring Home the Lost Children of Nepal 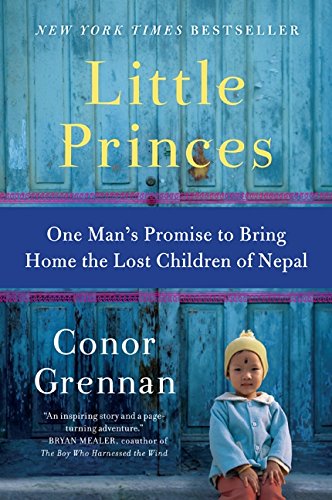 Little Princes by Conor Grennan is what happens when passion, talent, and a desire to change the world spill onto the page.

This true story begins when Grennan, on a whim, decides in 2006 that he will travel to Nepal and work in an orphanage dubbed Little Princes. Grennan, a young, single, American is ill prepared for what meets him there, caught entirely off guard by raging civil war and the many children who quickly attach to the foreigner. Despite having little to no experience with children, Grennan falls fast for them; and the tiny residents of the orphanage cling to any and all volunteers, unaccustomed to much attention from caregivers. When he leaves after a three-month stint to travel the globe, the boys continue to affect him. Not long after he meets up with a friend in Thailand he realizes he needs to return.

The beauty of this book is partly the fact that it is a memoir. But it is also more than that. I defy you to not be inspired or moved by this saga.

If asked to use only one word to describe this story, it would be quite simple: passion. A passionate nonfiction story doesn’t always translate as well on paper. Yet, here it does. Grennan’s passion is sparked when he first visits the orphanage. It continues to grow after he leaves and is nearly all-consuming by the time he returns to his second stint at Little Princes.

Remarkably, after learning the ways of the Nepalese culture and coming to understand the complicated nature of poverty that infects families, he learns the orphans in his charge, are, in nearly all of the cases not orphaned, but victims of child traffickers. Despite the horrific violence, the dangers posed by Maoist rebels who were trafficking children when they marched into schools and murdered all the adults and stole tiny child soldiers, Grennan persevered and risked his own life.

Inspired by their amazing strength of spirit, Grennan—Conor Brother, as the children called him—would collect information about the boys’ families and set out to climb through the Himalayan mountains to the villages in which they were born. Once he reached the villages the boys had come from, he painstakingly interviewed relatives and set out to find the family of origin for each child. Many confided they had been convinced to pay a lump sum in exchange for the promise that their boy will be educated or given a good life and placed far from the fighting. The boys were then taken to nearby Kathmandu and either sold into slavery or released. Often abused and neglected, the boys were, in almost all instances, made to believe their parents had died.

When I received this book in the mail, having only a tiny blurb to read about it, I made the assumption it was a book about a man who had traveled to Nepal and adopted children internationally after working at the orphanage. I couldn’t have been more wrong. This is instead the story of a man who refused to turn a blind eye when hints surfaced that death certificates had been forged, that government corruption was rampant, and that child slavery was common in Nepal.

Grennan, from time to time, returned home to the United States to visit family. During one of those visits in 2006, he set up a foundation to protect the children of Nepal. The foundation is a nonprofit called Next Generation Nepal. It has a website for more information or involvement.

While advocating for funding of the nonprofit and making connections, Grennan received an email from a fellow University of Virginia graduate named Liz looking for information about volunteering in an orphanage. Her email correspondence progressed and eventually became a plan to meet when she also comes to India and to work in an orphanage. Without giving the ending away, this story also contains a healthy dose of romance.

In light of the very real discovery of rampant child trafficking in Nepal, there should also be more thought given to the complex situations in many areas of the world where war, poverty, and natural disaster might have bred similar opportunities. There are tens of thousands of children still missing in Nepal.

Grennan’s foundation remains active and continues to reunite children with their families.