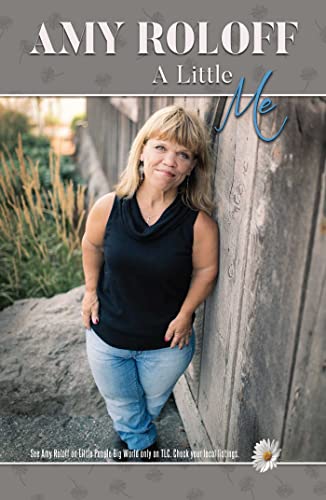 “‘Whatever package you come in, life isn’t easier or harder than another’s because you are different physically. There may be more challenges, but still, everyone has challenges.’”

Readers know Amy Roloff as one of the stars of TLC’s long-running hit TV show, Little People, BIG World. What one watches on the show, says Roloff, is a cut and spliced version of reality. Her story is her way of telling the truth.

Roloff was born with achondroplasia dwarfism. Her brother and two sisters were of average height. She recalls with fondness growing up in Michigan, with her father as her idol. Whenever she would be bullied or teased in school, he would repeatedly tell her, “God doesn’t make mistakes.”

“My parents were not fans of making excuses.” They always told her to try to figure things out for herself if she claimed she couldn’t do something.

For many years as a child, Roloff was extremely ill and often missed school. She was ultimately diagnosed with ulcerative colitis and had to undergo tests and hospital stays, both of which were frightening to a young girl. She ultimately had surgery in the ninth grade, which cured her, but left her body physically altered.

She loved to be in the kitchen. “Music and cooking were about giving and sharing my passion and talent with others . . . I used music and cooking to speak for me, instead of my self-doubt and fear.”

As a young adult, Roloff learned about LPA, the Little People of America organization, a group for people of short stature, which became an important part of her life. At her first event, she felt uneasy because she had never seen other little people before.

Determined to pursue her education, Roloff studied human resources and hospitality in college and ultimately graduated with a BS/BA. Her college years were her first time living away from home.

Eventually she would go on to meet her future husband, Matt Roloff, at an LPA conference. He lived in California, she in Michigan, though they talked almost every day. She fell in love with him though they had seen each other just four times. She always dreamed of getting married and raising a family.

They eventually married in 1987 and had fertility issues. Roloff became pregnant with twins, which was high risk. Soon, they bought a house and farm on 21 acres in Oregon.

Twin boys, Jeremy and Zach, were born at 34 weeks, then a girl, Molly, three years later, and then Jacob, three years after Molly’s birth. Zach is their only child with achondroplasia dwarfism.

Roloff repeatedly says that her husband was impulsive most of the time, which was difficult for her. But she enjoyed being a stay-at-home mom.

At one point when her husband lost his job, Amy Roloff took two jobs: one as a preschool teacher, and a paid position coaching children’s competitive soccer. Then, in 2003, the family was approached to take part in a reality TV show. Matt said yes, Amy said no.

Eventually, they did begin filming the show, which has been a huge hit for many years and is now in its 14th season.

One of the straws that broke the camel’s back was the fact that Roloff had evidence, through messages and photos that she felt should not have been shared between employer and employee, that her husband had developed a relationship with their longtime farm manager.

The children grew, got married, and the Roloffs became grandparents. But their differences could not withstand time, even though Amy Roloff’s parents have remained married for more than 60 years.

“I tried hard to be what I thought he wanted in a wife, but in the process, I lost a little of myself.”

The Roloffs divorced and after much self-examination, Amy Roloff finally became optimistic about her “second act.” At 50, she climbed Mt. St. Helens with her son, Zach, and while she had no real intention to seek another relationship, she met and began dating a man with whom she feels wonderfully compatible. “My second act is like a blank white canvas . . . I’m planning to paint it with bright, joyful colors.”

Over the years, and with Roloff’s many experiences—both easy and difficult—she quite intuitively learned to cope in a positive way.

“Whatever package you come in, life isn’t easier or harder than another’s because you are different physically. There may be more challenges, but still, everyone has challenges.”

The reader will appreciate affirmations at the end of each chapter in the form of “Encouragement from Amy.” They may be disappointed, however, that there are absolutely no photos in the book. It might have been nice for those who haven’t watched her TV show to see Roloff and her family, which might have presented the book to a larger audience.

A Little Me by Amy Roloff is a feel-good, inspirational memoir about a remarkable woman who addresses challenges head-on with a positive outlook and deep faith.