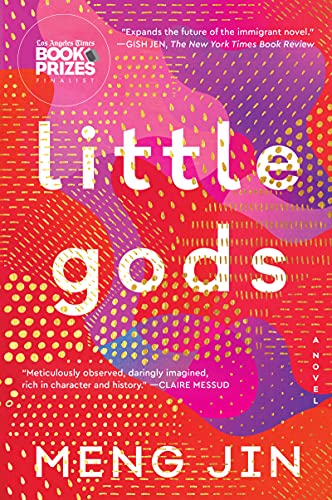 In this extraordinary debut novel, Meng Jin writes about numerous themes ranging from family relations, platonic and romantic love, the pain and pleasure of memory, and escaping one’s past in order to reinvent oneself—all framed, without intimidation, by scientific theory.  While the word “brilliant” can be grossly overused it would not be overreaching to apply it here.

The story’s main character is Su Lan, whose voice we never hear. Her story, and all its complications, are told by three other key characters: Zhu Wen, an elderly woman who befriends Su Lan and is her daughter Liya’s ersatz granny. Liya also narrates. The third narrating character is Yongzong, the father Liya has never known. In alternating chapters each of these figures adds to the story in which Su Lan is central, illuminating events of Su Lan’s complex life as Jin explores multiple themes expertly revealed in this compelling novel.

Su Lan is a gifted physicist, and a brilliant, beautiful, brittle woman. Early in the story Zhu Wen recalls her first encounter with her new neighbor in Shanghai who has taken an apartment for herself and her husband. “There was something alarming about her. . . . Her presence unsettled me, though I couldn’t say exactly how or why. She had this way of looking at things, an expression if you could call it that, with such focus and intensity you would think she was trying to bore a hole through with her eyes.” It sets a perfect expository tone for all that follows.

Later, Liya recalls that she “never stopped loving [her] mother. “A little pin fell out of the contraption of my love for her; it fell apart, until one day I discovered she was my enemy.” Such sentiments from a kind friend and an ambivalent daughter introduce the woman who is nevertheless loved by two men, Yongzong and his best friend, Bo, both of whom she abuses emotionally. Still, Yongzong marries her.

Su Lan gives birth, reluctantly, to Liya in Beijing on the night of the Tiananmen Square massacre. It is the same night that Zongzong disappears. Years later, Liya returns to China from America, where Su Lan lived and worked before her early death. It is Liya’s search for her mother’s past, and for her father, that launches the story and its author’s attempt to understand the depths of being human.

“I wanted to fight my mother,” Liya tells us. “She has put the evidence of my father away, then spirited me to the other side of the world, where she raised me alone, making herself so real, so substantial, so overwhelming that she suffocated the need for another parent. I remember the vicious way we fought, the cycle of our mutual care and contempt, how we would move to a new place, ushering in a period of lightness only to destroy it and start again.” Such careful crafting and use of dialogue is present, blooming like a delicate plant in need of nurturing, throughout the telling of this tale. The technique demonstrates repeatedly Jin’s skill as a storyteller, as well as her curiosity about the relationship between past and present, how memory impacts one’s future, and the art of creating one’s own life in all its uniqueness.

In a 2020 interview about her novel included in the book, Meng Jin told the interviewer that one of the biggest themes she was interested in was exploring the question of how people make themselves, “especially people like Su Lan, who really don’t identify with the life they were born into. The question of wiping your slate clean to make the life you want is one that came up over and over again [for me] in this novel. It makes sense because this is also an immigrant story, and what is that but attempting to make a new life?”

In the end, Liya sees that she can, and she must, make a new life for herself, one that doesn’t discard her history or memories, but one in which those memories no longer diminish, destroy or control her. It’s a life lesson for all of us and one that is exquisitely told.