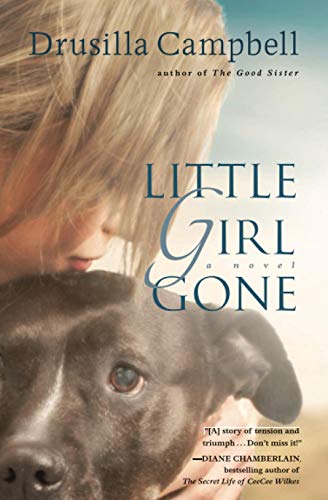 “Ms. Campbell’s ability to make Willis disturbingly sympathetic will keep readers turning the pages and asking themselves, ‘Who are the real victims in this story?’ as well as questions about the nature of evil and how it manifests, however briefly or tenuously, in all of us.”

What is quickly apparent in the novel Little Girl Gone is Drusilla Campbell’s knack with compact, specific detail. Take Ms. Campbell’s Yuma, Arizona, with its “single-story buildings, fast-food joints on every corner, dust and heat and wind, lots of military, and a pretty good baseball team.” Or the stark, isolated dump where Madora Welles lives with her savior/captor, Willis Brock, to name just two.

Ms. Campbell efficiently yet evocatively creates a strong sense of the place that is Madora’s world.

Madora is 12 when family tragedy teaches her she is not a lucky girl. A rebellious teen gone astray, she is on a downward spiral with drugs and men when Willis Brock rescues her. Madora’s need to be needed and her hunger for love and security make her an easy target for Willis’s brand of codependent, enslaved love.

For the next five years, they live in near squalor and isolation. The plot of a brainwashed, abducted victim is reminiscent of recent stories in the news. Ms. Campbell’s depth of characterization overcomes the fairly familiar plot and makes Little Girl Gone a page turner.

Madora’s affection for a puppy she rescues, her somewhat chance friendship with a young boy, and Willis’s inexplicable actions all propel her slow progression from troubled teen, to gullible believer, to frightened doubter.

Little Girl Gone is Madora’s story, yet Ms. Campbell’s honed and rounded supporting characters makes it so much more.

There is 12-year-old Django Jones, whose wealthy parents have recently been killed in a car accident. Through his griefstricken memories, his dead mother’s devotion and love for him are as palpable as his anguish is heartbreaking, even physiologically painful.

Most impressive is Ms. Campbell’s rendering of Willis Brock, a dishonorably discharged marine medic, nurse’s aide, and wannabe doctor. He rescues (aka kidnaps) young girls, captivating and imprisoning them psychologically and in at least one case physically. Willis could easily be a stereotypical all evil sociopath, but Ms. Campbell renders him chillingly human. He is simultaneously vulnerable and despicable, charming and frightening.

Ms. Campbell’s ability to make Willis disturbingly sympathetic will keep readers turning the pages and asking themselves, “Who are the real victims in this story?” as well as questions about the nature of evil and how it manifests, however briefly or tenuously, in all of us.