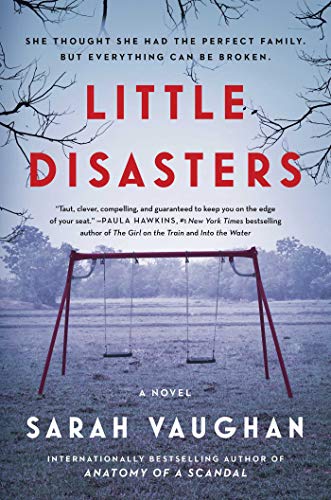 “Powerful and compelling, the prose gets to the heart of parenting as well as self-doubt, anxiety, and heartbreak—a read many parents, especially those who have endured difficult deliveries and children with health issues, can fully understand.”

How strong are the bonds of friendship? London Pediatrician Liz Trenchard and Jess Curtis met several years ago when they were both pregnant for the first time. Along with two other women in their birthing classes, Mel, and Charlotte, they have remained close, yet Liz and Jess's closeness has sustained the most.

When Jess arrives as the hospital with ten-month-old Betsey in trauma, Liz is faced with a critical dilemma. Betsey is diagnosed with a skull fracture, and Liz, who knows Jess who is a stay-at-home mom for Betsey and her older sons, Frankie and Kit, adores her children and would never harm any of them; yet suspicion looms as to how Betsey got hurt.

Motherhood can be stressful, and most mothers have long tiring days when their infants may be ill or fussy, and lack of sleep can make the situation much worse.

Since experiencing a traumatic delivery, Jess has never felt a close bond with her daughter, and untoward thoughts have raced through her mind. Her husband

Ed has given all household and childcare responsibilities to Jess while he works long hours to support them.

Before giving birth to Betsey, Jess was fulfilled with her two sons, ages eight and 10, but it was Ed who believed another child—hopefully, a girl—would complete their family. Jess is known to be the perfect wife, housekeeper, and mother, but how can she deal with all the pressure now with a newborn added to the mix? Kit is a calm and placid child, whereas Frankie tends to be hyper as well as fragile, so how can she handle them the house and an infant, too?

"The first time Jess imagines hurting Betsey, she has been home from the hospital for three days. Ed is back at work. . . . The boys are at school, and it will be lovely for her to have some time with Betsey on her own. . . .'

". . . . She'd forgotten she could feel so bone-achingly tired: this tiny baby who

wants to be fed at one three, and sometime after five, has drained her of all her energy."

When Jess cannot accurately explain Betsey's "accident," Liz, along with her colleagues, become suspicious and feel the need to call social services. Jess is aghast and distressed that Liz would do that to her, but Liz explains the welfare of the baby is their first concern. To make matters worse, when the authorities are called, Jess learns she is only allowed limited and supervised visitation with Betsey, and Martha, her sister, is asked to move in with her to monitor her with her sons.

Jess displays signs of obsessive-compulsive disorder and goes through counting rituals, constantly flagellating herself for being a bad mother. She needs to be

better than her own mother and torments herself for not being perfect.

Meanwhile, Betsey remains hospitalized and under observation as she is now suffering seizures and needs to be closely watched. Jess cannot get a handle on this and sneaks into to see her, only to have her instinctively snatch her from her crib, believing she'd be better off with her. This decision leads to her arrest and gives Ed, as well as Liz and her friends question her sanity and her questioning who she can trust. In addition, Frankie goes off the wall becoming totally fearful and frantic, blaming himself.

Feeling completely alone Jess in her mind conjures up losing her home and her family. But she must protect and care for her baby. Why can't anyone understand this?

adventure, she knows a change of scenery is what Jess needs as well as her sons. They head to the park for a hike, and Martha discovers a large tree perfect for climbing. She urges Kit to scale up it though Jess is against it. She must protect her son, and she cannot let him do something that may harm him. Martha chastises her stating he's a young boy and needs an adventure.

"'Jess.' Martha puts a hand on either of her upper arms and looks her in the eye. 'I know you're under a lot of strain, but he needs to enjoy being a little boy.

He needs to challenge himself. To be allowed to live in the moment. Otherwise, you're doing him a disservice. You're not preparing him for life.'"

What more must Jess have to endure? Detached from the ones she loves, Jess

agonizes not only her fate but that of Frankie and her marriage. But something

sinister is in this mix that turns the scenario around.

known, mainly her childhood and her neglectful mother, now suffering liver disease from alcoholism. Liz's backstory tells of her deep connection with her younger brother, Matt, and their contempt for a mother who never seemed to care, especially after Matt was hurt and Liz, feeling responsible, stepped in to take their mother's place in nurturing him back to health when she refused. The similarities between Liz and Jess and their history binds them with a complete understanding of each other.

Little Disasters is a very intense and complex novel in which the characters of Liz,

Jess, and Ed share their point of view as well as their feelings of inadequacy, guilt, and remorse. Powerful and compelling, the prose gets to the heart of parenting as well as self-doubt, anxiety, and heartbreak—a read many parents, especially those who have endured difficult deliveries and children with health issues, can fully understand.