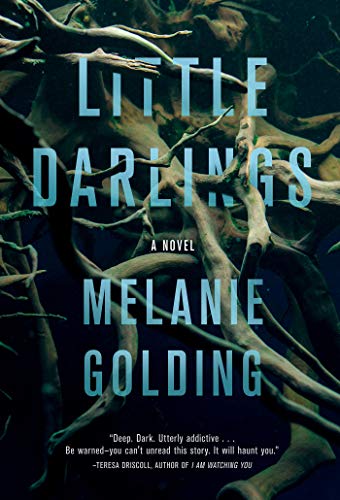 “Melanie Golding has written a scary, creepy, disturbing book you will thoroughly enjoy.”

You're the frazzled, traumatized, exhausted mother of newborn twins after a difficult birth waiting for the rush of love that all mothers are supposed to immediately feel. You're sharing a hospital room with another new mother and baby. You can't see them, because the curtain is drawn sectioning off the room, but you can hear the mother cooing and talking to the baby:

"The voice was low, muttering, somehow unsettling . . . Just a woman murmuring nothings to her baby—why was it troubling . . . ? There were baby sounds too, though this baby sounded like a bird, squawking softly, quacking, chirping to be fed . . ."

A day later when you're feeling better, you get out of your hospital bed, tweak the curtain aside and you see . . . something horrible!

In the book, this happens to Lauren Tranter. Lauren immediately calls the nurse and frantically describes what is on the other side. When the nurse swishes the curtain away, nothing is there.

This is a changeling story. For the uninitiated, a changeling is a fairy child left in place of a human infant that has been stolen by fairies. The only way to get the human child back is to put the changeling in the river . . . and hold it underwater until the real child appears.

Lauren is convinced this has happened or will happen to her babies, Morgan and Riley.

The nurse does not believe her. Hospital administrators think she's hallucinating. The police write it off as a false alarm or a scam. Her friends think she's having a temporary meltdown after the hard birth. Her husband thinks she may be going a little insane.

But Lauren insists she saw what she saw. Despite suffering the debilitating after effects of C-section hospital meds, being sleep deprived and overworked caring for two demanding babies without any help at home, she becomes excessively protective refusing to let Riley and Morgan out of her sight for a single moment.

"Exhaustion flooded her then. She allowed her mind to drift, her eyes to drop shut. Though she could have slipped easily into sleep, Lauren forced her stinging eyelids apart. There was danger in falling asleep, especially when the babies were quiet: a silent thief could seize the opportunity to sneak in, lift the basket and be away, with nothing to alert her as she slumbered, peacefully unaware. . . She went back into the front room and checked the bolts on the front door before sitting down again."

Enter Detective Sergeant Joanna Harper. Readers will find her an especially likeable fictional character. Jo is on duty the morning after the incident report came in citing an attempted abduction, but she doesn't dismiss it as readily as others had brushed it off. She orders a copy of the CCTV surveillance footage from hospital security. While viewing the comings and goings in the maternity ward, she sees an unidentifiable . . . something:

". . . There. Something ran across the floor, taking the same route that Harper herself had taken earlier in the day, toward the bay where Mrs Tranter and Mrs Gooch were installed, bay three. She backed up the video and ran it again. A flash of something, rodent-like, blink and you'd miss it. . . There seemed to be a streak of them, whatever they were—more than one, anyway, flowing past the nurse's station. . . "

Author Melanie Golding has written a scary, creepy, disturbing book you will thoroughly enjoy. Fairy-and-baby-related epigraphs at the beginning of some sections lend to the eeriness and intrigue of the story. This one is especially apropos:

"Those who are carried away are happy, according to some accounts, having plenty of good living and music and mirth. Others say, however, that they are continually longing for their earthly friends. Lady Wilde gives a gloomy tradition that there are two kinds of fairies—one kind merry and gentle, the other evil, and sacrificing every year a life to Satan for which purpose they steal mortals. —W. B. Yeats, Fairy and Folk Tales of Ireland."

The story is reminiscent of the Grimm Fairy Tales told to children. The whole book oozes an atmospheric fairy tale quality.

The ending is a head scratcher and may annoy readers who like everything wrapped up and tied in a nice, tight bow. On the other hand, Golding may have intended it that way in order to challenge readers who live in a book long after they've finished it.

Read it anyway. You'll be express-trained all the way through to the scene at the river.