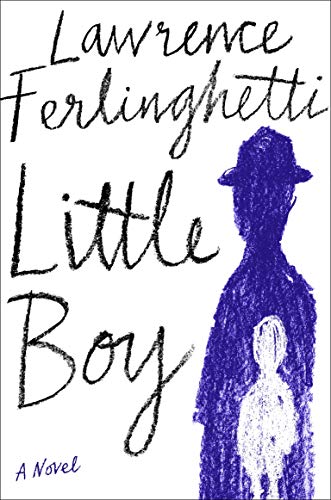 “Little Boy will delight you again and again. It is rich and playful poetry disguised as a novel, and it is pure Ferlinghetti.”

Lawrence Ferlinghetti is one of the great poets in United States literary history. He is also one of the most important publishers and book distributors of the second half of the 20th century. He is a major figure among the Beat poets, and A Coney Island of the Mind is an iconic collection of his poetry from the 1960s that has now sold over a million copies. As a publisher of City Lights Books, Ferlinghetti was a major disseminator of Beat poetry and was the publisher of Alan Ginsberg’s Howl that attacked taboos and defied the censors, establishing Ginsberg as a major voice in American literature.

Ferlinghetti’s literary production is massive. There is somewhere in the neighborhood of 30 volumes of poetry, as well as collected essays, edited works of other poets, several plays, and a travel journal. He is also a painter, and his works have been shown at multiple galleries across the United States and Europe.

Born on March 24, 1919, Lawrence Ferlinghetti is completing his 100th year on the planet. To mark the occasion, Little Boy: A Novel will be published in March as part of the celebration of his birthday.

Although a novel, Little Boy is heavily autobiographical, and there is little doubt as to the identity of the little boy. The first 25 pages or so are set up as autobiography, but, from that point on, Little Boy becomes a riff on the last century with allusions much further into the past and across multiple world cultures interspersed with episodes from the life of the little boy.

If that isn’t enough, Little Boy is written in a free-wheeling style using stream of conscious, marvelous word play, and uninhibited connections. After those opening autobiographical pages, Ferlinghetti abandons most punctuation. The period is used randomly, and there is an occasional question mark, exclamation point, or ellipsis. New paragraphs begin with the first word in all caps. As always, Lawrence Ferlinghetti is not bound by convention nor limited by language or, indeed, of culture.

There are recurring themes running through the novel, as well as, bursts of social, cultural, and political criticism. As a veteran of World War II, as were many born in 1919, Ferlinghetti seems bemused by the term “greatest generation.” Early on, he puts it this way: “indeed born, as they told us, to make the world safe for democracy ha-ha but that was no cynical slogan back then because we actually believed it believed we were fighting the Good War.”

He recalls the hope and optimism of the time in America before the frontier was bought and sold, and “the pursuit of happiness had not yet turned into a rat race” Later, he comments on D-Day and the Normandy Invasion, of which he was a part, with some depth of feeling before spinning off topic to London pubs and Scottish lassies.

When dealing with more contemporary topics, Ferlinghetti expresses his discomfort with the electronic world: “I found it on Facebook and the World Wide Web I saw it in the paper I saw it on TV it must be true.” In Paris, he watches a “young stud” on his laptop with earphones in place. Several disturbances occur close by and they do not register with the young man. Ferlinghetti tries asking him a question and gets no response. “Then I call 911. After some time a cop car arrives and he’s arrested for ‘non-participation in humanity.’ They haul the corpse away.”

Ferlinghetti’s memory dips into multiple locations across the United States and the globe. His descriptions of the landscape and culture of Paris are mixed with memories of childhood. He comments on French writers and philosophers, rolls back into the ancients, and cites his contemporaries. At times, the scope and pace of the prose can seem exhausting as he hurtles across time and space.

Throughout Little Boy is an avalanche of language, words, and phrases, running across and through subjects and over time and space. There are echoes of Whitman in such descriptions, as this one of the little boy: “grown up after an endless series of confusions transplantations instigations fornications confessions prognostications hallucinations consternations confabulations collaborations revelations recognitions restitutions reverberations misconceptions clarifications elucidations simplifications idealizations aspirations circumnavigations realizations radicalizations and liberations, Grown Boy came into his own voice . . .”

Ferlinghetti quotes poets, philosophers, and playwrights. He borrows the language of sports, with baseball seemingly his favorite. He cites films and novels. He comments on the shortcomings of religion, the destructive nature of capitalism, and rampant consumerism, including its inability to satisfy. He deals with fear and joy, life and death, and sex, giving frequent attention to the penis.

Little Boy is a novel that sweeps through a lifetime that now encompasses a century. Within it, Ferlinghetti seems determined to include the whole of his experiences and everything within range of his experience, whether first or second hand. It is a breathtaking summary of his century on the planet.

This is an exhilarating and exhausting read that ends at a sidewalk café in Paris where it seems the little boy is waiting for Godot or anyone who can tell him the meaning of life. Or, more likely, he is simply living.

If you have read Lawrence Ferlinghetti’s poetry with great pleasure, Little Boy will delight you again and again. It is rich and playful poetry disguised as a novel, and it is pure Ferlinghetti. For those who have not previously encountered him, Little Boy is likely to send you off in search of one of Ferlinghetti’s many volumes of poetry.