Little America: The War Within the War for Afghanistan 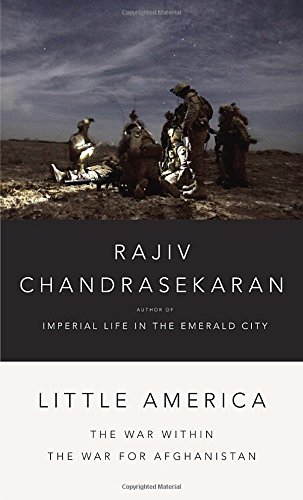 “‘For years, we dwelled on the limitations of the Afghans. [Instead] we should have focused on ours.’”

Halfway into Rajiv Chandrasekaran’s (hereafter Rajiv) devastating portrait of American misadventure in Afghanistan, I began calling old friends. Was the author the typical “journalistic expert” or did he really know what he was talking about?

The answers from some tough fellow soldiers: Rajiv is a reporter known for spending months-long stints in the field with the troops, “embracing the suck” right alongside the grunts.

Such intrinsic credibility elevates this superbly written book to more than a tour de force about a nasty little war. Like King Canute redeployed from the seashore to the Khyber Pass, this war in Afghanistan annually costs the lives and limbs of American soldiers as well as $100 billion taxpayer dollars.

The author’s verdict: “. . . Afghanistan stands alone in the annals of American warfare. . . . For all the grand pronouncements about waging a new kind of war, our nation was unable to adapt . . . Our generals and diplomats were too ambitious and arrogant. Our uniformed and civilian bureaucracies were riven with internal rivalries and go-it-alone agendas.”

Rajiv mercilessly shows how Afghan realities often made absurdities of the carefully balanced and oh-so-nuanced policy choices routinely birthed inside the Beltway.

But I wondered if an already skeptical public might also draw some larger conclusions. Think your government is capable of reforming health care or creating jobs anywhere but in government? Then consider the author’s core assessment of our failures in Afghanistan. “The reason wasn’t to be found in Kabul . . . It was in Washington: the American bureaucracy had become America’s worst enemy.”

Among the most nuts makin’ of them all: the Agency for Internal Development. AID lacked the agricultural expertise or common sense to grasp that cotton was a better cash crop for poverty ridden Afghan farmers than opium poppy.

Even as American troops paid a bloody price to improve Afghan security, AID failed “to build a sustainable economy for the farmers of southern Afghanistan.” Naturally, the Taliban were happy to pitch in.

Little America’s cast of characters is worthy of a Solzhenitsyn novel, including heroes struggling to align the American way of war with timeless Afghan verities. Brigadier General Larry Nicholson leads his Marines on improbable quests through the debris-strewn villages of Now Zad, where the graffiti reads, WELCOME TO HELL.

His political advisor, Kael Weston, is a rising young American diplomat who has spent seven of his 37 years in war zones. While carefully avoiding the pressure plates of buried booby traps, Weston casually asks a lance corporal about his training on the metal detector on which all their lives now depend. “Well, sir,” the corporal replied nonchalantly, “not as much as you’d like to think.”

Afghanistan, that traditional graveyard of empires, might be equally destructive of reputations. Under General David Petraeus, the hastily reinvented American military doctrine of counter-insurgency (country-building on steroids and with heavy weapons) proved unexpectedly successful in Iraq. But in infinitely more primitive Afghanistan, there were constant tensions between the theory and the reality of garden-variety counter-terrorism (killing insurgents with technology, special-forces, drones and anything else).

The expensive Afghan hybrid of country-building/counterterrorism also conflicted with President Obama’s strategy for steep reductions in American troops. When Petraeus complained in June 2010 that the planned troop reductions would “invalidate my campaign plan” the President replied coolly, “David, you shouldn’t have assumed I wouldn’t do what I told the American people I would.”

The late Ambassador Richard Holbrooke also takes his place under Rajiv’s microscope. A figure cut from an earlier era of American statecraft, Holbrooke comes across as infuriating, brilliant, manipulative, charming, and sometimes clueless—often on the same page.

During a subsequent visit to Centanni’s home town, his father tells the author that his son “loved the United States,” his bedroom shrine proudly displaying Rick’s football jersey and a bumper sticker: MY SON FIGHTS FOR OUR FREEDOM.

It is a last, poignant reminder about the characteristic inequalities of American sacrifice in war and peace. The memories of Corporal Centanni, his comrades in arms and those who led them haunt former soldiers like me. We have seen distinguished friends commanding thankless missions and our band of brothers judged by a society no longer accustomed to service, let alone self-sacrifice.

Similar thoughts may have spurred the author’s epigrammatic conclusion, “For years, we dwelled on the limitations of the Afghans. [Instead] we should have focused on ours.”

Little America, Rajiv’s Chandrasekaran’s brilliant and important new book, shows why those faults lie not only in our leaders but also in ourselves.

Kenneth Allard is a former army colonel, West Point faculty member, and dean of the National War College. For almost a decade he served as an on-air military analyst with NBC News, is the author of four books, and is an occasional contributor to the The Daily Beast.