Confession of a Lioness 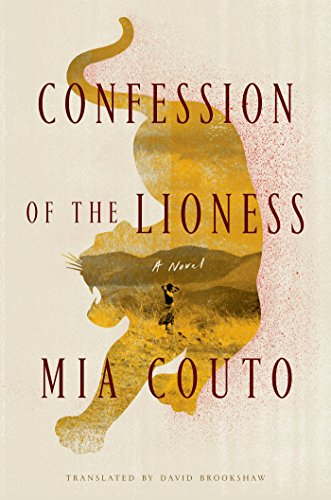 Mia Couto is a prize-winning writer living in Maputo, Mozambique, where he practices as a biologist. He writes in Portuguese and is well known in Portuguese speaking literary circles. Confession of a Lioness, his latest novel, is a bête noire, a dark fable, set in his native country. In this book Couto writes as a fabulist. The novel is post-modernism married to magical realism and shot through with African oral tradition spiritualism.

In other words it is a literary fiction hybrid.

Couto does not pretend to be a post-modernist in the James Joyce or Virginia Woolf mold or a writer in the magical realism genre of Gabriel Garcia Marquez or in the African oral tradition of a Ben Okri. But these are the writers whose influence we can see interwoven in his work.

In 1996, a Hollywood movie with Michael Douglas and Val Kilmer, and based on a book of the same name (supposedly a true story) The Ghost and the Darkness portrayed a white hunter in 1898 called in to help a European bridge builder in east Africa kill two man-eating lions, so-called “the white lions of Tsavo.” The African bridge workers did not believe they were “real” but spirits and named them “The Ghost” and “Darkness” who entered the village at night and eventually killed 130 people. Eventually both lions were killed and appear to have been albinos.

In Africa, as elsewhere, legends and folklore die slowly. Throughout sub-Saharan Africa (as in the Latin American consciousness of Marquez) the spirit world is separated by a gossamer thin fabric from our “real” world, a flimsy curtain easily rent.

This interregnum is the terrain of this mysterious, almost haunting, novel. In Confession of a Lioness lionesses are physical presences as well as spiritual entities that inhabit some of the women (with ancient witchcraft lineages) in Kulumani, a devastated, rural relic of a village, now largely abandoned. A frequent and unwilling shuttlecock tossed around in the long, freedom war between Frelimo and the Portuguese colonial administration in the 1980s and 1990s.

The novel is like a late Picasso work painted in shades of abstract modernism. When you try to find familiar images among the spaces, lines and shapes, you are defeated. In this work when you try to find chronological sequencing or to separate narrative voices you struggle. So best to let the power of the writing—and it is largely poetic and compelling—wash over you, and enjoy.

From Mariamar’s Diary: “And suddenly, there it is: a lioness! She’s come down to the drink from the calm water of that part of the riverbank. She contemplates me without fear or excitement. As if she had been waiting for me for a long time, she raises her head and pierces me with her inquisitive gaze. There is no tension in her behavior. It might be said she recognizes me. More than this: The lioness greets me with sisterly respect. We linger in this mutual contemplation and, gradually, a sense of spiritual harmony takes hold of me.

“Having slaked her thirst, the lioness stretches as if she wanted a second body to emerge from her own. Then she slowly withdraws, her tail swaying like a furry pendulum, each step caressing the earth’s surface. I smile with uncontained pride.”

If you must succumb to try and build a chronological grid of the novel, you’ll find it in two diaries that comprise the tale and therefore two voices. One voice is that of Mariamar (see above), one of four daughters, whose sister is killed and half-eaten by a lioness. Her father is a drunkard who sexually abuses his daughters, and a one time famous hunter. Their mother, Hanifa, is a fatalistic, dark force who partly inhabits her daughters’ world and partly lives with spirits.

Further lion killings occur. At the request of village elders for help, the newly independent, post-colonial Mozambique authorities send an inept local administrator, his obese wife, and a reporter. They also hire a mulatto hunter, Archangel Bullseye to kill the lioness. Bullseye’s account is found in the other diary.

Thereafter we are led through a maze of perhaps (overly ambitious themes) such as likely encroaching death by the spirit-lioness, but also burgeoning urban modernism versus ancient superstition, and a struggle to redefine gender roles in a country still struggling with the ravages of a recent, brutal civil war.

From Archangel Bullseye’s Diary: “I look around as if surveying the landscape. It’s the last time I shall see Kulumani. It’s the last time I shall hear this woman. With due respect for final goodbyes, Hanifa Assulua whispers: “I am the last lioness. That’s the secret only you know Archangel Bullseye . . . This is my confession. This is the thread of time I place in your hands.”