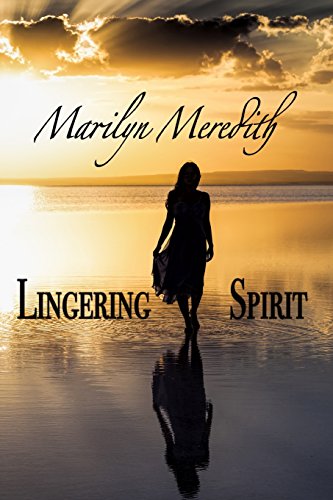 Marilyn Meredith captures the essence of an untimely death in her paranormal romance, Lingering Spirit. Police officer Steve Ainsworth is gunned down during a routine traffic stop. His 28-year-old widow, Nicole, is left alone with their two daughters, first grader Kimberly and four-year-old Sarah. However, hearing the doorbell ring at 3:00 A.M. wasn’t entirely unexpected.

Four months earlier, Steve had experienced a premonition. He foresaw his death on the job. To escape this fate, he moved the family from the heavily populated city of Channel Harbor to the secluded wilderness of Quail Meadow. But he never anticipated that the violence he envisioned would become his destiny regardless of location.

Meredith does an excellent job depicting the series of events that family members endure immediately following the loss of a loved one. Co-workers and neighbors filling the house. The funeral home negotiations. The lack of sleep. The mental fog. The arrival of out-of-town relatives. The bending to the point of breaking. Yet Nicole’s grief isn’t limited to burial preparations and the acceptance of condolences. She is visited by Steve from beyond the grave.

Nicole experiences moments with Steve that are similar to those of Sandra Bullock’s character in the movie, Premonition:

Finally, she drifted off into a troubled sleep. “Nicky.” Steve nuzzled her neck. Good. He was home. She turned over and he kissed her, his lips warm and sweet—the kiss a promise of lovemaking to come. “Mmmm, Steve.” She held out her arms to him, but nothing was there. And then she remembered, Steve was dead. But it had seemed so real. She heard his voice, felt him touch her, kiss her. But it wasn’t possible.

The incidents increase in frequency. Dresser drawers open and close. Books fall to the floor. Lights are turned off and on. While in their beds, the children see their father bend down and kiss them. After Nicole shares what is going on with her father, they both witness an armchair move. Her father goes on to say, “Unless he’s trying to tell you something, trying to get you to do something. Maybe he just can’t leave until he can make you understand what it is he wants you to do.” This explanation is similar to the one in the cult classic, Ghost, starring Demi Moore and Patrick Swayze.

Nicole decides to move back to Channel Harbor.

Though she didn’t know what it meant, the rappings, bangings, and furniture moving ceased. She no longer felt as though someone followed her. Hopefully, whatever had been holding Steve back had released him. But she couldn’t help wondering if the feverish energy she expended in the packing had driven him away. Maybe he was upset with her decision.

Purchasing an older home, she slowly tries to rebuild her life for the sake of her children. However, things don’t go smoothly.

Longing for Steve had become a part of her existence. Neither time nor activity lessened the ache. She heard a bang, and raised up her elbow. Frowning she listened intently. It happened again, a noise she recognized. Staring into the shadowed corner of the room, she watched as the big highboy that had once been Steve’s but now held her sweaters, T-shirts, and jeans, rocked violently back and forth. That hadn’t happened since she’d moved back to Channel Harbor.

This would definitely be a case for Jason and Grant of the SyFy Channel’s “Ghost Hunters.”

Nicole’s father offers an alternate possibility. “Because you haven’t experienced any of these goings on since moving here, perhaps it’s another ghost making itself known . . . a ghost of someone who used to live in this house.” But Nicole disagrees with his assessment: “Because, I’m not frightened. If it was a ghost I didn’t know, surely I’d get some bad vibes . . . but I didn’t. It was just like all the times things happened in Quail Meadow.” Yet her father persists, saying, “But it isn’t natural for a spirit to hang around this world for such a long time.” Nicole counters, “I don’t know. I guess I’ll just have to wait and see what happens. Maybe eventually he’ll do something that will help me understand.”

Steve is trying to tell Nicole something. This final message upends the life she thought she would lead after his death. A connection is established to someone who has recently entered her life—a person who will reshape the outlook of her future in a way she never imagined.

Meredith is a master of characterization. She fully rounds out the facets of her protagonists’ personalities and richly develops the details of the supporting cast. She does not hit any false notes with her dialogue and builds strong relationships among her characters. She realistically describes what a young widow would go through following the tragic death of her husband.

Overall, uncovering why this spirit lingers is an incredibly moving experience.