A Line to Kill: A Novel (A Hawthorne and Horowitz Mystery) 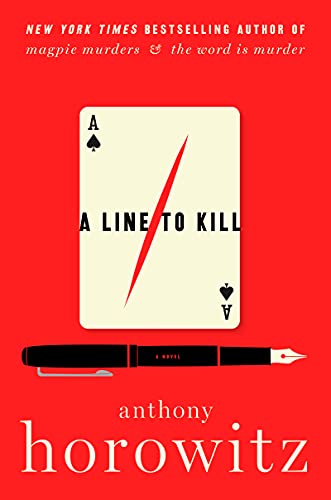 Innovative British author Anthony Horowitz is up to his usual intertextual antics in A Line to Kill, a sequel to The Word Is Murder and The Sentence Is Death. This third entry in the Hawthorne and Horowitz series follows narrator Anthony Horowitz as he accompanies former Detective Daniel Hawthorne to a literary festival. Anthony has no desire to accompany Hawthorne anywhere, but his publisher leans on him. Anthony has agreed to write one more book about the detective, so why not spend quality time in his company and gather material at the same time?

The first issue is that Anthony doesn’t even like Hawthorne. He finds the detective too pedestrian, too gruff. He doesn’t have a graceful way of talking to people the way the author does, for example. And the destination is hardly appealing. The Channel Island of Alderney measures a mere three square miles. Its population hardly merits a literary festival. The narrator is so unenthusiastic that he retreats to his room at the Braye Beach Hotel, leaving the more loquacious Hawthorne to make friends with the other participants.

Anthony naps through the festival’s opening talk, but he does attend the reception offered by the festival’s patron, Charles le Mesurier. Charles is a gracious host, but due to his aspirations for the island’s potential pipeline, he’s made a lot of enemies.  Anthony realizes that Hawthorne has a sworn enemy of his own on the island. While Derek Abbott was being questioned for wrongdoing at the police station, it seems that Hawthorne accidentally pushed him down the stairs. Now that Abbott is out of jail, has Hawthorne arranged a visit to the island so that he can track Abbott down and have another confrontation?

The grandiose reception erases any semblance of a normal literary festival when the host is found tied to a chair quite dead. Mystery readers will be familiar with the setup. Now that there has been a murder, the island becomes a version of Agatha Christie’s Ten Little Indians. The murderer is among them. None of the festival participants are allowed to leave. Each author is ready to accuse the next.

Local authority Deputy Chief Jonathan Torode steps in to conduct his investigation, but there have never been any murders on Alderney, so what are he and his assistant to do?

Torode explains the situation to Hawthorne: “It would be wonderful to have you on board. I’d be the first to admit that you’ve got much more chance of solving this than me, but I’m sure we’d both agree that’s irrelevant anyway. The most important thing is to catch the [one] who did it and make sure he’s put away.” Hawthorne would be conducting his own investigation on the sly but “in parallel.” Since Hawthorne is stuck on the island anyway, why not help out? He’s happy to do so. Our narrator tags along, riding on Hawthorne’s coattails.

Not all the islanders are happy to have Hawthorne’s help, however. As one of the locals complains, “I was there when you were giving your talk and it struck me then that you have absolutely no heart at all. You don’t believe in the law. You don’t want to help people or society. You’re a detective. That’s all that matters to you.” Anthony is ready to agree with the islander’s assessment, but he’s a captive too—both of the island and Hawthorne’s allure.

Anthony has an even bigger problem. While he quietly believes he’s better than Hawthorne in every way, somehow the detective is always one step ahead of him. Anthony thinks he’s found a good clue; Hawthorne already has it. Anthony thinks he’s discovered the identity of the killer; Hawthorne is five or six steps ahead of him even though, as it turns out, he’s wrong, too. They might be on the verge of closing in on the murderer when a second incident occurs, thus reversing their initial assumptions about nearly everything.

The antics of the odd couple add up to a romp around an island where even the taxi driver seems a likely candidate for wrongdoing. As we dive more deeply into the story, Anthony pulls back the layers of truth before letting Hawthorne pull them back even further. None of the characters has a simple history. They’ve known one another for a lifetime, so they all have ties and alliances to one another. And secrets.

For the reader, the unfolding is like unwrapping a present that has been concealed in multiple layers. We’re on a pleasant ride throughout Alderney until we slide into the final solution at the end. While there are plenty of clues, we ultimately find ourselves in the author’s shoes: bowing down to the seasoned ex-detective while anticipating his next adventure.