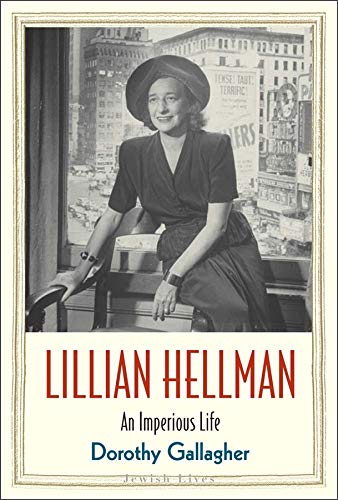 “It seems, indeed, that author Gallagher and her subject share more in common when it comes to the art of subterfuge.”

For much of the 20th century Lillian Hellman was the only preeminent woman playwright of the American Theater. Hellman wrote four Broadway hits before she was 40, the most notable being The Children Hour and The Little Foxes.

Hellman was also a successful screenwriter and collaborator, indeed “a fixer,” on many uncredited projects. Unlike many of her contemporaries, Hellman had a high-profile, second act writing her memoirs—An Unfinished Woman, Pentimento, and Scoundrel Time—which put her back on the media center stage, a world-weary intellectual who had seen and done it all, including spending at least one night in Spain with Hemingway.

Hellman’s reputation for unblinking honesty reached iconic proportions in her famous j’accuse against McCarthy’s infamous House on Un-American Activities (HUAC) where she proclaimed, “I will not cut my conscience to fit this year’s fashion,” refusing to name names of known Communists whom she had worked and associated with as a past member of the party herself.

Even during her lifetime, there were many who questioned Hellman’s veracity as a writer and even in facts about her personal life. Now, 30 years after her death and many biographies later, Dorothy Gallagher moves quickly past Hellman‘s accomplishments and revisits some of those possible mendacities in a frontal literary assault.

Gallagher’s authoritative style makes you want to read more, but as interesting as much of this, at under 150 text pages, it seems like a professional hit job. But Gallagher’s doubts about Hellman’s truthiness are not convincing in all the areas she focuses on.

Among the laundry list of negative observations include Hellman’s lack of Jewish pride, noting that she would sling anti-Semitic remarks, for instance, and pointedly avoided writing about Jewish life. In her play Watch on the Rhine, which was about Nazi resistance fighters in the late 30s, there is hardly a Jewish character of note, and with her uncredited rewriting of the Diary of Anne Frank for Broadway, Hellman aimed to make it less Jewish and more universally themed.

Gallagher also suggests that Hellman wouldn’t have been such a successful playwright had not her long-time lover Dashiell Hammett applied a heavy editorial hand in crafting her plays. Later, she suggests that she didn’t do everything that she could have for Hammett after he was sent to prison for contempt of Congress.

Hellman was obviously more than disingenuous about her affinity to communist Russia, changing her story about her support of Stalin’s Soviet regime. She wrote to the House Un-American Activities Committee that she was a member of the party for only two years in the 30s, but Hellman supported Henry Wallace, communist party candidate for VP in the late 40s.

The end of the book focuses on Hellman doing damage control late in her career over the circumstances and facts of Hellman’s Pentimento centerpiece story “Julia.” Mary McCarthy (The Group) claimed publicly on the Dick Cavett show that everything Hellman wrote was, in fact, fictitious—specifically that the people and events in “Julia” were a complete fabrication. Hellman sued and lobbied a few very public insults McCarthy’s way. But people began to ask a woman living in the US who had been key in helping the resistance fighters if she was, in fact, the real Julia. Supposedly, the woman whose life the story was based on contacted Hellman by letter, with Hellman stonewalling and refusing to answer any questions.

Gallagher is convincing in this case, but some of the other events she focuses on are odd red herrings in her portrait of Hellman. Why for instance, does she feel the need to compare and contrast the characters of Hellman and Gertrude Stein—just because they once met at a party?

In her introduction, Gallagher gives a disclaimer about her specific areas of interest, but some seem mean spirited more than illustrative. Hellman readers will be interested in areas that Gallagher just glosses over. What about Hellman’s close friendship with Dorothy Parker during their salad days? Those were certainly legendary. Why didn’t that topic warrant a chapter, instead of just passing references to a relationship that soured over time? It seems, indeed, that author Gallagher and her subject share more in common when it comes to the art of subterfuge.