The Light of Earth: Reflections on a Life in Space (Outward Odyssey: A People's History of Spaceflight) 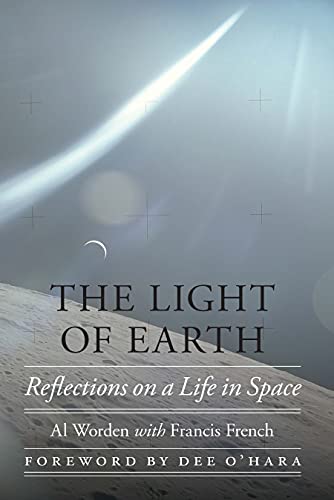 Al Worden, command module pilot on the Apollo 15 lunar mission, belongs to a unique club, one of only six men who flew to the dark side of the moon, alone and out of contact with any other human being. While his fellow crew members Jim Irwin and David Scott explored the lunar surface, Worden was miles above them. If anything, catastrophic happened during the moon landing, Worden was fully trained to return to Earth alone. It was an awesome responsibility filled with personal contemplation.

Worden’s collection of writings on his career, The Light of Earth: Reflections on a Life in Space (co-written with space historian Francis French) is his second memoir, coming 20 years after Falling to Earth: An Apollo 15 Astronaut's Journey to the Moon. The first book was a straightforward account of his life and career. The Light of the Earth is more meditative, with essays and other writings that consider what being “an astronaut” is on levels personal, scientific, political, and metaphysical.

By the time of the Apollo 11 moon landing, astronauts were American knights, unblemished and untarnished, enshrined in our national consciousness through the auspices of Life magazine and CBS news anchorman Walter Cronkite. They flew into the heavens on rocket ships named after the great gods of mythology: Mercury, Gemini, and Apollo. But the luster of space exploration evaporated once the pinnacle of that first moon walk was over.

The program briefly captured public imagination with the crises of Apollo 13 when an oxygen tank exploded, turning the mission into a touch and go effort to bring the astronauts home alive and safe. With tragedy averted and moon flights returning to routine events, the public once again grew blasé about Apollo, while politicians dickered over the expenses foisted on taxpayers by the space program.

The Apollo 15 crew didn’t help matters after their return to Earth. Their mission was more complex. Irwin and Scott explored the edges of lunar mountains, using a rover that took them miles from their landing spot. Worden made the first deep space walk on their way home, retrieving film stored on cameras at the base of the Apollo command module.

These achievements were overshadowed by scandal: the astronauts smuggled 400 stamps onto the spacecraft, canceled them on the moon, and then provided them to a dealer for sale to collectors. It wasn’t illegal but it was against regulations. After the story broke Worden, Irwin, and Scott were hauled before a senate committee, and ultimately banned from any future NASA flights. It was an excessive punishment. Though Worden hints at the story here he doesn’t bother with the details; it’s better explained in his previous book.

At times The Light of Earth feels like a conversation with an old friend over a few beers. Worden loved his job. There’s a good sense of self-awareness within these pages. In Worden’s view, there is no such thing as an “ex-astronaut.” Worden was different from many of his peers: he was the first divorced man to fly in space, a genuine aberration given the public face of America’s astronauts as devoted family men.

Anyone who flew in space, particularly in the first two decades of NASA, was an instant hero, the intergalactic equivalent of a sports star or Hollywood celebrity. The men who flew in space were in high demand, not just for their scientific knowledge, but also at autograph shows for rabid space geeks. In some cases, this fanboydom goes from hero worship to the realm of crazy-town profit motive. “I can't tell you how many times I've had collectors come in there with a whole stack of stuff in their arms for me to sign, just for their personal collection—or worse, to sell online right away,” Worden writes. One man showed up unannounced at Worden’s doorstep with an armful of baseballs he wanted signed. Worden obliged, just to get rid of him.

Worden holds nothing back in his descriptions of NASA in-house politics. There were men at the top of the rockets and behind the Houston counsels, brimming with fallibility and contradictions. Worden doesn't disappoint on that count. He gives his impressions the 12 astronauts who walked on the moon and 12 who shared his role as command module pilot (the Apollo 13 crew is included in this latter section). There’s no need for Worden to be polite here and he isn’t. It’s the anti-Life portrait of the astronaut corps: one man assessing his colleagues, their relationships, good times and bad. In other words, it’s real.

Beyond the essays, The Light of Earth shows another side to Worden's literary talents. After the Apollo 15 mission was over, Worden filled reams of legal pads filled with verse. “It was my own personal debriefing after going to the moon,” he says. The poems were intended as something private. That changed when Worden showed his poetry to his friend Fred Rogers. Worden was a frequent guest on Rogers’ television program Mr. Rogers’ Neighborhood, telling children what it was like to be an astronaut. Rogers encouraged Worden to publish his work, which resulted in the book Hello Earth: Greetings from the Endeavor. (It was a popular book in its day: now out of print, the volume now sells for well over $100 on Amazon and eBay.)

Worden reprints several of his old poems here, including different drafts of each piece so the reader gets a sense of his writing process. There are not sappy verses spouting the expected clichés. There is a lyricism to Worden’s poetry. Consider the closing lines from the piece “Rising from Earth”:

Extending the realm of man

Born again in the light of day

And everything is suddenly right.”

The Light of Earth provides a smart analysis of the space program after the Apollo program, written in easy language that an engineering neophyte can comprehend. Worden has a jaundiced view of the space shuttle program. He is not surprised by the explosions of Challenger and Columbia. Cost-saving measures, in Worden’s grim conclusion, doomed the crews of those two flights well before liftoff. He sees space tourism, as promulgated by Jeff Bezos and Elon Musk, as nothing more than playtime for the rich. And woe to the fools who claim that the moon landings were staged in a movie studio. Worden salutes Buzz Aldrin for punching out a loudmouthed heckler who demanded that Aldrin explain what “really” happened during the “faked “Apollo 11 mission.

The space race is filled with familiar names. But there were countless behind the scenes workers who made going to the moon a reality. Worden singles out one of these unsung people, Dee O’Hara, who served as a support nurse from Gemini missions through the space shuttle program. O’Hara wasn’t just another medical professional: she was a friend and co-conspirator with astronauts looking to hide problems from the NASA bureaucracy. “Guys would have some really personal medical issues, and she would never tell the doctors, as long as it didn’t affect the astronaut’s job performance,” Worden writes. “She’d get them the right treatment and take care of whatever it was. Imagine the most personal, embarrassing medical issues you could have. You’re probably imagining the right things.”

Worden died in March 2020, shortly before putting the final touches on The Light of Earth. O’Hara provides the final words on his life in her affectionate introduction: “Al had so many insights to share with the world,” she says, “and now, with this book, he will continue to do so.”