A Life of Service: The Story of Senator Tammy Duckworth 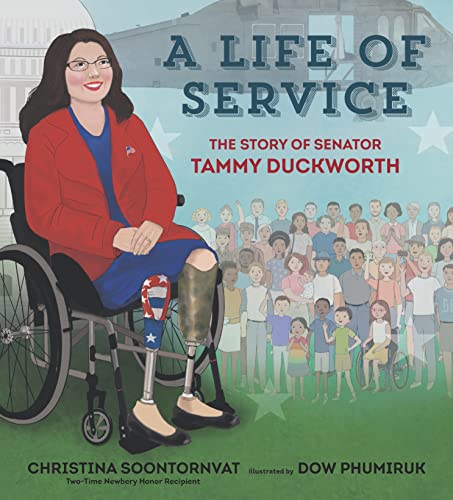 “With A Life of Service: The Story of Senator Tammy Duckworth, Soontornvat and Phumiruk have inspired young readers to ‘break barriers and defy expectations,’ to soar, to not waste a single moment, and to keep on fighting the good fight.”

In A Life of Service: The Story of Senator Tammy Duckworth, award-winning Thai American creators Christina Soontornvat and Dom Phumiruk present an incredible story of perseverance and heroism. Moreover, in sharing Senator Duckworth’s story, young readers are shown what it means to be a fighter in the face of adversity—a fighter’s fighter.

Born in Bangkok, Thailand, to a Thai mother and an American (US Marine Captain) father, Senator Duckworth’s life story, according to Soontornvat, begins with, “Even before she ever touched American soil, Ladda Tammy Duckworth knew that she would someday serve her country.” This dedication to America, modeled after her father’s work with the United Nations, helping refugees, is a theme that runs throughout Senator Duckworth’s life and career.

Due to family hardships, Senator Duckworth learned from an early age what to do when life serves up challenges. Her father loses his job, the family moves to Hawaii where, “they hovered on the edge of homelessness and relied on food stamps to buy groceries. On most days, the only food Tammy could count on was her school’s reduced-price meals. . . . At one point, Tammy was the only one in the family working. She sold flowers by the side of the road from a plastic bucket.”

Despite these hardships, Senator Duckworth graduated from high school near the top of her class, headed off to college and graduate school—though, “Tammy still knew she wanted to serve her country. She just hadn’t figured out the best way to do it.” Then she learned about the Reserve Officer’s Training Corps (ROTC), “something clicked,” and she decided to sign up to serve, “and it felt right.” Senator Duckworth went to flight school to fly Black Hawk helicopters and “became a commander of Company B of the 106th Aviation unit of the Illinois Army National Guard.”

During this time Senator Duckworth married a fellow soldier, Bryan Bowlsbey, and they began a life together. Then America entered a war with Iraq, and although her commitment as a unit commander was coming to a close, she wanted to go into battle. She became a battle captain and flew Black Hawk helicopters, delivering supplies and picking up soldiers. But then her life almost ended on November 12, 2004, when her helicopter was shot down by enemy fire. Senator Duckworth survived but “the grenade blast had destroyed both of her legs. It nearly destroyed her right arm.”

With utmost sensitivity, Phumiruk’s illustrations powerfully depict this tragic day as well as the brutal year of recovery and rehabilitation that followed, including Senator Duckworth’s struggle learning how to walk with prosthetic legs. Senator Duckworth was determined to heal enough to return to battle. But then life offered her a different way to serve her country: by becoming a US Representative for the state of Illinois. Still in physical pain, she decided to run for office—but lost. She ran again six years later, and this time she won. “Inch by inch, falling, getting up, and falling again. And again. Get back up. Keep fighting.”

Senator Duckworth has been an advocate for refugees, women, and transgender people in the military, people with disabilities, and veterans. “She has put her body, her voice, and her heart into service of her country.” With A Life of Service: The Story of Senator Tammy Duckworth, Soontornvat and Phumiruk have inspired young readers to “break barriers and defy expectations,” to soar, to not waste a single moment, and to keep on fighting the good fight.