Life Isn't Everything: Mike Nichols as Remembered by 103 of His Closest Friends 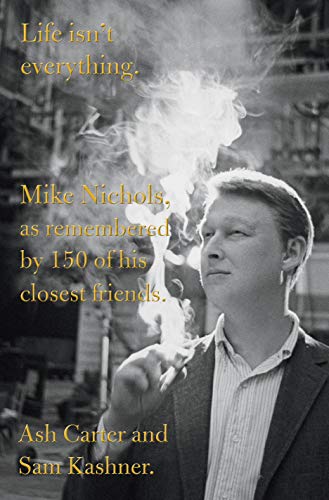 “for anyone looking to understand Mike Nichols, his working methods, and impact on American culture, Life Isn’t Everything is a good place to start.”

To say American theater and film would not be the same without Mike Nichols is a vast understatement. His resumé is a whirlwind: founding member of the Compass Players, precursor to Chicago’s Second City theater; legendary partnership with Elaine May in a comedy duo that made it to Broadway and then recorded a series of hit albums; theatrical collaborations as a young Broadway director with rising new playwright Neil Simon; gifted filmmaker who made his debut with Who’s Afraid of Virginia Woolf?, a tour de force that tapped into the turbulent off-screen relationship of its stars Richard Burton and Elizabeth Taylor.

And these are just his early accomplishments. Life isn’t Everything: Mike Nichols as Remembered by 103 of His Closest Friends by Ash Carter and Sam Kashner gathers together original interviews with other sources, including the PBS American Masters episode on Nichols, to show us the man behind the brilliance. The result is a flawed but fascinating oral history that covers the eight decades of Nichols’s extraordinary life and career.

Nichols, who died in 2011, was born Mikhail Igor Peschkowsky to a Jewish family in 1931 Berlin. They fled Nazi Germany in the late 1930s, changed their surname to Nichols, and settled in New York City. As a child young Mike was struck by alopecia, the reaction to vaccination for whooping cough. For the rest of his life Nichols wore a toupee and sometimes false eyelashes.

His interest in theater developed early. As a teenager, Nichols would mingle with Broadway crowds during intermission, and then sneak into the theaters to watch the second acts of many plays, including the original productions of A Streetcar Named Desire and Death of a Salesman (the latter of which Nichols would later direct on Broadway himself).

Following a brief stint at NYU, Nichols enrolled at the University of Chicago as a pre-med student, hoping to become a doctor like his father. Instead Chicago transformed his life. Nichols arrived in the midst of a revolution. Improvisational theater was all the rage, with Viola Spolin and her son Paul Sills leading the charge. Nichols joined the Compass Players, Sills’s theatrical troupe whose cast members included Del Close, Shelly Berman, and Elaine May.

What happened next changed American comedy. Nichols and May found in each other the deal improv partner in a teaming that began with the two of them goofing around on an elevated train platform. During the button-down era of the Eisenhower years the Nichols and May satirical explorations into relationships between men and women were comedy revelations. But Nichols wanted to be more than just an improv comedian. After their on-stage partnership came to its inevitable conclusion, Nichols’s rise to glory was inexorable.

Life Isn't Everything is at its best when Nichols’s theater and film colleagues share production memories. Dustin Hoffman, an unknown actor thrust into stardom via Nichols’s second film, The Graduate, remembers Nichols telling the cast “‘It's a comedy, but please don't try to be funny—just read it straight.’ And we did. He later said he was ready to throw up because he thought it was a flop. We took him too literally.” Instead The Graduate became a cultural icon, winning Nichols an Oscar in the process.

His next film, an adaptation of Joseph Heller’s WWII novel Catch-22, was a near disaster thanks to the casting of Orson Welles in a secondary role. Welles had unsuccessfully tried to obtain the book for himself. Denied the opportunity to make his own version of Catch-22, Welles went into full prima donna mode, using his scenes to battle Nichols in an epic duel for directorial control.

Nichols was a workaholic, equally comfortable directing both film and theater, and later television, including his groundbreaking HBO adaptation of Angels in America. He was a member of the exclusive EGOT club, winning an Emmy, Grammy, Oscar, and Tony for his work (and in the latter category, multiple honors for comedy, drama, and musicals). Off hours Nichols was a passionate enthusiast of Arabian horses and made a small fortune as a horse breeder.

The luminaries Carter and Kashner have brought together are an eclectic bunch, with the result being a sort of grand dinner party where conversation is all about the life and times of the man they all admired. The roll call includes Richard Burton, Nick Pileggi, Eric Idle, Maureen Dowd, Paul Simon, Art Garfunkel, Rita Moreno, Cynthia Nixon, Whoopi Goldberg, Tony Kushner, John Lahr, Tom Hanks, Alec Baldwin, Robin Williams, Emma Thompson, Nichols’s brother Robert (an accomplished physician in his own right), and 87 others in what amounts to a multigenerational who's who of show business. The one notable omission is Elaine May, who not only was Nichols’s greatest stage collaborator, but also scripted a few of his later films. For whatever reason May is not here (and that goes unexplained), her absence is a glaring hole.

It's also notable that the book is reticent about Nichols’s private world. To their credit, the authors point out that Life Isn’t Everything is not meant to be a strict biography that covers Nichols’s entire life or body of work. Rather, the book is a memory collage of the many people who worked with and loved him. That’s obvious from the first chapter, a tedious collection of quotes praising Nichols in what amounts to hagiography at its most boring.

Late in the book, some interviewees rhapsodize over Nichols’s romance with journalist Diane Sawyer, his fourth and last wife, and her impact on his final years.  As it reads here, their marriage was the perfect union filled with bliss and unblemished with any unhappy moments. There is only scant mention of Nichols’s three previous marriages and barely any acknowledgement of his three children with wives numbers two and three. What, if any influence did they have on Nichols? These are questions Carter and Kashner studiously avoid in favor of the idealistic and at times treacly “Nichols and Sawyers” fairy tale love story.

A great talent deserves a great biography. That’s not this book. But for anyone looking to understand Mike Nichols, his working methods, and impact on American culture, Life Isn’t Everything is a good place to start.