Life in a Fishbowl 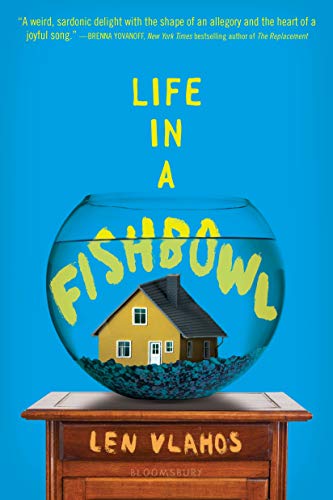 When 15-year-old Jackie Stone’s father is diagnosed with a brain tumor, it sends her into a tailspin. Her father is her world.

“Jackie Stone loved her father. She loved him a lot. She kept a photo of her dad, Jared, taped to the inside of her locker at school . . . Whenever the day got rough, which for Jackie was more often than not, she would sneak a peek at that photo. It had become a kind of visual security blanket.”

Jackie’s father doesn’t know how to respond when he finds out he is dying. Basically, he freaks out, thinking about what will happen to his family when he’s gone. He looks for a way to end his suffering before it gets too bad.

“An idea started to percolate in Jared’s brain. A crazy idea. An idea only a man with a high-grade gliobastoma multiforme could possibly have. He would auction his life—not his things, but his actual life—on eBay. The euthanasia lobby was pressuring him to take a position on a proposed expansion to Oregon’s right-to-die laws; he would become their poster boy.”

The book takes off from there, offering up a multitude of characters who want to bid, the members of his family, and friends of each person. There are so many, it’s hard to keep up. Finally, his auction is taken down since it violates eBay’s rules, and the Stone family ends up on a reality show, which becomes their lives— watched by millions as they grieve and live out the last few weeks of Jared’s life.

Jackie finds friends who help her fight back against the monster of a television show, and her mom and sister join in. Jackie is likeable and relatable, and her friends embody the goodness still to be found in some people.

Jared’s brain tumor is anthropomorphized, which is quirky and unique, but also distracting. It becomes a character in its own right, along with the people.

“Like most living things, the tumor had no idea how it had come into being. Much as a baby emerges from the womb and finds its mother’s nipple, the glioblastoma simply woke up one day eating its way through the gray matter in Jared’s frontal lobe and knew that it was pleased to be there.”

This book introduces a cross-section of characters, and could appeal to both teens and adults. It investigates the depths of loss, the complexity of right-to-die laws, and the greed of the entertainment industry. A mix of humor and drama, there are parts to appeal to every reader.