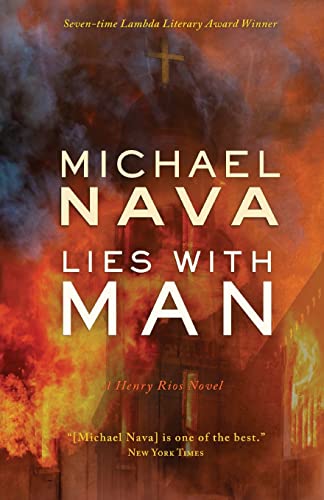 “Nava is an impassioned writer who has once again created a fascinating picture of Los Angeles at an earlier, less enlightened time, centering on gay men trying to shed the shame they have been taught . . .”

The 1980s were a golden age of gay literature. Superb poetry, memoirs, drama, and fiction came out of a tragic, angry period. AIDS was ravaging the LGBTQ+ community, and activists were finding ways to counter official and unofficial homophobia. Cities had gay bookstores and progressive bookstores everywhere had LGBTQ+ sections. Gay literature was important to an embattled community.

Among the many fine writers who found inspiration in the pride and anger of LGBTQ+ people during this period were three masters of crime fiction: Joseph Hansen, who over 21 years (1970–1991), wrote 13 novels featuring the gay crime-solving insurance investigator, Dave Brandstetter; Richard Stevenson, who has written 16 novels featuring Albany, New York, based detective Donald Strachey; and Michael Nava, a lawyer by day, who has written nine novels centering on defense attorney Henry Rios. The crime solvers these three authors created were proudly gay and, like all heroes of crime fiction, flawed in interesting ways. Hansen, Stevenson, and Nava have garnered high praise from literary critics and won a number of fiction awards.

Henry Rios, a gay Mexican American defense attorney working in Los Angeles, is a recovering alcoholic and active workaholic trying to maintain a legal career, which in the 1980s is not easy for a brown-skinned gay man. The cases Rios took on in the seven novels Nava wrote between 1986 and 2001 involved murders that were linked to homophobic killers and institutions. Many were written when AIDS was ravaging American cities. As with many crime novels, the personal life of the central character intersected with the crimes he had to solve. Nava’s first seven Henry Rios novels were written between 1986 and 2001. In 2019, after a long hiatus, Nava brough Henry Rios back to life with a new novel, Carved in Bone. Now he has added his latest Henry Rios novel, Lies with Man.

Lies with Man, which mixes fiction with historical fact, is set in 1986. AIDS is attacking young men already suffering from low self-esteem because of the self-hatred they learned from their families. While there is no cure, drugs that are illegally imported from Mexico offer some hope.

On the California ballot is Proposition 64, which would quarantine all people with AIDS (historically true). This Draconian measure is supported by rabid political conservatives and many religious organizations including an evangelical church, Ekklesia, which is controlled by affluent conservative whites. The pastor is Daniel Herron, an ex-hippie who got his position by marrying the daughter of the charismatic founder of the church. Their childless marriage is not a happy one, and some of the trustees think Daniel is too soft. Daniel has a skeleton in his closet, a 19-year-old gay biracial son with whom he has, unbeknownst to his wife, become close. When the son, Wyatt, becomes HIV positive, Daniel tries to get him the medications he needs.

Meanwhile, Henry Rios has fallen in love with Josh, a young HIV positive waiter who belongs to a radical group fighting Proposition 64. When Josh’s roommate Theo is accused of bombing Ekklesia and killing Daniel, Henry gets involved in the case, which becomes increasingly complex, involving police hierarchy and powerful private citizens.

Like his author, Henry Rios is a lawyer who finds justice for his clients by mastering the intricacies of the legal system. A number of scenes in the novel take place in courtrooms or in conferences with opposing lawyers. Rios knows that justice is not easily obtained for racial, ethnic or sexual minorities. Fortunately, Michael Nava is a lively writer who can make dialogue and exposition exciting. He also knows how to build suspense.

Nava paints a vivid picture of the homophobic and racist bullying of the Los Angeles Police in 1980s and before, using the real names of the police chiefs who maintained a tradition of prejudice and violence. Henry Rios has to navigate the attempts on the part of the police and their attorneys to cover up egregious actions against innocent citizens. Rios, who is HIV-negative, also is negotiating a romance with a younger, HIV-positive lover.

Nava’s characters are fully drawn. Daniel Herron’s widow, who briefly descends into alcoholism, is a complex creation, insecure but ultimately possessing great fortitude. Freddie, the mastermind of the church bombing, is a stew of powerful mixed feelings about his ethnicity, his sexual orientation, and his professional loyalty. Like many heroes of crime fiction, Henry Rios is doggedly obsessive once he takes on a case, careless of the dangers of pursuing his investigation.

Lies with Man maintains the high standard Michael Nava set in the novels he wrote a generation ago. Nava is an impassioned writer who has once again created a fascinating picture of Los Angeles at an earlier, less enlightened time, centering on gay men trying to shed the shame they have been taught and becoming proud agents of social change.