Liberalism and Its Discontents 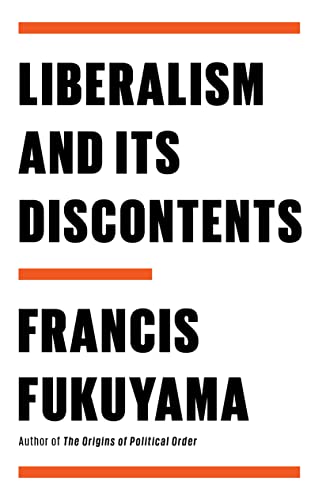 There is something wrong with contemporary liberal democracy, especially in the United States. Defending its values while diagnosing its ills is the subject of this book in which the author, Francis Fukuyama, provides a concise but critical analysis of where he sees democracies such as the United States both succeeding and failing.

Fukuyama is famous for his 1992 book The End of History and the Last Man. There he proclaimed that the US and the West had not only won the Cold War against communism and the Soviet Union but that liberal democratic capitalism had won the ideological war, emerging as the only viable meta narrative. Yet despite this proclamation this book asserts that the turn liberal democracy has taken since this endangers it.

Fukuyama describes the core of liberal democracy as consisting of a core set of values that address the problem of social diversity and disagreement. These values, traceable to the 17th century and especially the British philosopher John Locke, include a belief in individualism and individual rights. It is also a commitment to egalitarianism or the belief in the equal moral worth of all individuals. It is also universalist in its belief that its values are transcendent and apply across the world and to all individuals. Additionally liberalism is also associated with a belief in science, progress, and knowledge, and often also tied to market capitalism as a form of economic order.

While classical liberalism faced rivals at one point including communism, its superiority lies in a set of political economic institutions committed to the limited state, human autonomy, relative market autonomy, and an agreement on a peaceful means to resolve disputes via elections. Liberalism’s strength is  historical—it has delivered economic goods and prosperity to many.

Yet Fukuyama sees liberal democracy as producing the roots of its own crisis. From the political right the commitment to individual market freedom, especially with the emergence of market fundamentalism and neo-liberalism in the 1970s, had produced significant gaps between the rich and poor and produced many losers. Many of these losers turned resentful of immigration and government programs such as free trade agreements viewed as hurting them. From the left, freedom in terms of lifestyle choices, such as with the emergence of what the author describes as identity politics, has produced a political intolerance and a political backlash from the right.

Together these two visions of liberalism pushed to their extremes are undermining its core values. Additionally, current trends in media concentration as well as the economic deregulation of the economy that began in the 1970s have weakened the liberal state and made it difficult for political institutions to fix themselves. Liberal democracy is thus in a crisis of its own doing—liberalism is the solution to the problem of social disagreement, but it is also exacerbating the problems it was meant to fix. The book concludes with a plea to the right and left to return to and embrace core liberal values, hoping both sides will recognize the limits of their vision of autonomy and make peace with the other side.

This is an ironic book. As noted, 30 years ago Fukuyama proclaimed that history had ended with the triumph of liberal capitalism and that it had proved its historical superiority. Yet even as he wrote, the roots of what he was criticizing were already there. Neoliberalism in the form of Thatcherism in the UK and Reaganism in the US were dismantling the social welfare state that addressed the economic problems.

From the left, the civil rights movements for women, people of color, and the LGBTQ+ community were both in full swing but also being thwarted by a conservative turn in the US. If anything, this book is the refutation of The End of History. It argues that the halcyon world that Fukuyama defended in 1991 is failing under its own accord, weakened by forces that liberalism created itself. Liberalism’s stability proved to be less than that, leading to the problems of today.

A second problem with the book is that despite language that places blame on both the right and left, he clearly lays more criticism on the left, recounting familiar attacks on social welfare programs that undermined families or gave incentives to single women to have non-marital children. Finally, the book and the author seem wedded to the past in a world that consists of the traditional nation state before the emergence of the European Union, globalization, and the demand for the realization of the promise of universalism for all individuals that liberalism promised but did not deliver.

In short, Liberalism and its Discontents is simultaneously an apology and response to The End of History. It is an establishment book that fails to see the problems that the world defended once by Fukuyama may be the cause for much of what he now criticizes.