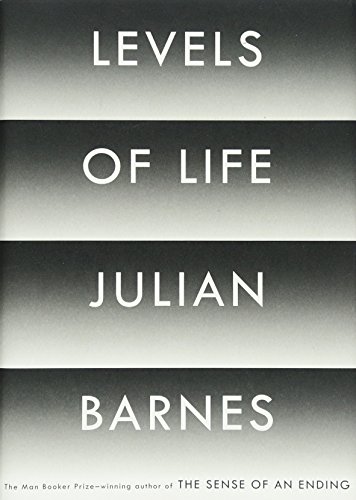 “You put together two people who have not been put together before; and sometimes the world is changed, sometimes not. They may crash and burn, or burn and crash. But sometimes, something new is made, and then the world is changed. Together, in that first exaltation, that first roaring sense of uplift, they are greater than their two separate selves. Together, they see further, and they see more clearly.”

Levels of Life is a poignant, extended metaphor of a “story,” by the “uxorious” Julian Barnes, winner of the 2011 Booker Prize for his novel The Sense of an Ending.

Set in three, distinct acts, which at first seem wholly separate—the first act is a historical piece regarding the “balloonatics,” “the new Argonauts,” who engaged in hot air ballooning in 19th century Europe; the second homes in on a (doomed) romance between one of the principal “balloonatics” and the actress Sarah Bernardt; and the third is a moving elegy to Barnes’ wife, the literary agent Pat Kavanagh, who died in 2008—but which together eventually come to form a “nice pattern” of a narrative.

Short enough to be consumed in one sitting, but meaningful enough to keep the reader sustained for a long time after closing the book, Levels of Life is heartfelt and raw. Sometimes it is angry. At other times it is witty. But it is always memorable.

The moment you hit upon the core of the story, a few pages in to the third act (The Loss of Depth), when Mr. Barnes begins to describe the harrowing, personal experience which is losing his wife, his companion for 30 years, is one of the shortest, sharpest shocks I have had in reading a book for a long, long time. There I was bobbing along nicely on the breeze, enjoying the antics of the “balloonatics” in act one (The Sin of Height) and the comic escapades of the larger than life Fred Burnaby in act two (On the Level), and suddenly, there was the jolt. The key change.

The loss of air pressure.

This is obviously intentional on the part of Mr. Barnes. His use of imagery throughout the book is crucially important to the tying together of the separate narrative strands.

The first act begins like so: “You put together two things that have not been put together before. And the world is changed. People may not notice at the time, but that doesn’t matter. The world has changed nonetheless.” In this instance, Mr. Barnes is referring to the “putting together” of ballooning and photography, as achieved by the Frenchman, Felix Tournachon (a.k.a. “Nadar”).

Nadar is an engaging figure; a kind of lesser Da Vinci. Famed throughout France (“The photographer was always famous: Victor Hugo once addressed an envelope with the single word ‘Nadar’, and still the letter got to him.”) among the many strings to his bow were writing, photography, and ballooning. It was his great dream to take the first aerial photograph: he saw the huge benefits for cartography.

This was a hugely hopeful, entrepreneurial age, and Barnes explores it engagingly, taking in Jules Verne, Victor Hugo, Sarah Bernhardt, and countless others. All of then in thrall to the heroes of the day, the “balloonatics.” The “balloonatics” themselves are shown to be Promethean in their desires. Exploration, discovery, adventure are the words hot on people’s lips, closely followed by freedom.

But what goes up must come down.

The polar opposite here of “thrilled discovery” is death. For “The sin of height is punished. Icarus messed with the Sun God: that was a bad idea too.” Often, their “overreaching” is met with disaster. With painful crash landings. “As one modern historian puts it: ‘The impact drove his legs into a flower bed as far as his knees, and ruptured his internal organs, which burst out on to the ground.’”

The surviving “balloonatics” talk of the “moral feeling” of attaining height or being airborne. “The aeronaut could visit God’s space—without the use of magic—and colonize it.” They become: “The eye in the sky; God’s security camera.”

Which brings us to photography, which “like jazz, was a sudden, contemporary art which achieved technical excellence very quickly.” Mr. Barnes asks: “So why do we constantly aspire to love? Because love is the meeting point of truth and magic. Truth, as in photography; magic, as in ballooning.”

In the second act, we meet—fully; we’ve been introduced to him in the first act: Fred Burnaby. Fred Burnaby whose friends—and who needs enemies with friends like these—called him “the most slovenly rascal that ever lived” and a man who sat “like a sack of corn on a horse.”

Burnaby is larger than life: a “balloonatic” who even looks like a balloon. He: “weighed seventeen stone, wore a striped coat and a close skullcap.” This is him on a venture across the English Channel in his balloon: “When two French fishing boats signal for him to descend and be picked up from the water, he responds ‘by dropping a copy of The Times for their edification’—hinting, presumably, that a practical English officer can manage perfectly well by himself, thank you, Mossoo.”

But Burnaby, ridiculous though he is, has the same weakness as all of us. He falls in love, with the actress, Sarah Bernhardt. He is ultimately rejected. “He hadn’t asked her what she meant when she told him she loved him. What lover ever does? Those plush and gilded words rarely seem to need annotation at the time.”

Then comes the crash, and burn. Three years after Sarah Bernhardt’s rejection: “Burnaby was killed at the Battle of Abu Klea by a spear-thrust to the neck from one of Mahdi’s soldiers.”

Mr. Barnes observes: “We live on the flat, on the level, and yet—and so—we aspire. Groundlings, we can sometimes reach as far as the gods. Some soar with art, others with religion; most with love. But when we soar, we can also crash. There are few soft landings. . . . Every love story is a potential grief story. If not at first, then later. If not for one, then for the other. Sometimes, for both.”

And so to the act three key-change, the crash into the flowerbed, the spear to the neck: “You put together two people who have not been put together before. . . . sometimes it works, and something new is made, and the world is changed. Then, at some point, sooner or later, for this reason or that, one of them is taken away. And what is taken away is greater than the sum of what was there. This may not be mathematically possible; but it is emotionally possible.”

Here, Mr. Barnes begins to utilize the imagery he has introduced in the first two acts. He talks of his heartache feeling as though he has been “dropped from a height.”

He talks of the shock of your life partner dying: “you have suddenly some down in the freezing German Ocean, equipped only with an absurd cork overjacket that is supposed to keep you alive. And you can never prepare for this new reality in which you have been dunked.” He talks of grief being “vertical—and vertiginous—while mourning is horizontal.”

He navigates the winds, tries to plot a course between, “the Silent Ones and the advice givers.” He considers “the question of suicide” and the “solipsism of grief.” He is taking a new aerial photograph of his life, which has changed geographically. Death “reconfigures space. You have entered a new geography, mapped by a new cartography. You seem to be taking your bearings from one of those seventeenth-century maps which feature the Desert of Loss, the (windless) Lake of Indifference, the (dried-up) River of Desolation, the Bog of Self-Pity, and the (subterranean) Caverns of Memory.”

The world has become smaller, for him. His “key ring (which used to be hers): it holds only two keys, one to the front door of the house and one to the back gate of the cemetery. This is my life, I think.”

It is all incredibly moving, incredibly personal. And yet at the same time, while he mentions the last book his wife read, or the last film she saw, he never actually divulges what they are. He says: “We are bad at dealing with death, that banal, unique thing; we can no longer make it part of a wider pattern. And as E. M. Forster out it, ‘One death may explain itself, but it throws no light upon another.’”

But the castaway, balloon-crashed Barnes somehow does manage to make his loss universal. Because this is—at its core—a love story, and it is written with big heart.

I find it astounding that he never loses control of the narrative, despite his grief. He builds a pattern, a different, more realistic “7 stages of grief” which we can all relate to, no matter how far removed. He creates a pattern:

“So each of us must pretend to find, or re-erect, a pattern. Writers believe in the patterns their words make, which they hope and trust add up to ideas, to stories, to truths. This is always their salvation, whether griefless or griefstruck.”