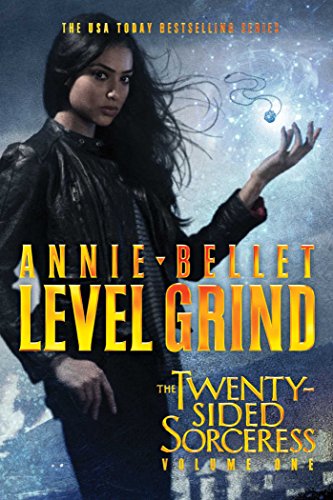 Level Grind is a compilation of the first four short novels of the Twenty-Sided Sorceress series, an urban fantasy collection about Native American sorceress-in-hiding Jade Crow and her mostly-shapeshifter friends solving supernatural crimes. It's also about, in these four episodes at least, her training to take on her murderous and manipulative ex, a stronger sorcerer who wants to eat her heart and steal her powers.

The feel of these stories is more Dresden Files than female-led UF usually leans; she's less tough-girl sexpot and more wisecracking nerd in over her head. The book as a whole walks the line between what's expected of the genre and some neat new twists, creating stories that are fresh without being too different from their fellow urban fantasies. It also walks the line between fun and horror that the best UF does, endearing the characters and then throwing them into creepy and dangerous situations where they have no idea what's happening but it's their job to figure it out.

Jade is not a professional; she's just someone who keeps winding up in the middle of crimes having to do with magic and shapeshifters, and she's scared and ill-prepared, but too moral in the end to ignore when people need help. It's that fact that keeps her from coming across as too cynical and keeps her soft enough to root for. Seeing her power grow from story to story is exciting, and watching her struggle with what that power means is humanizing—important when the characters technically aren't human at all. It's also fun having honest geek characters who aren't stereotypes or jokes; they're just her friends.

These four collected stories are more examples of how novellas are polishing up and running with the old form lately; each of the four stories is self-contained enough to read alone, as they were originally published, but also fit together tightly enough to read as one volume. It's an exciting and clever story that is aware of how cool some of the details are, and reads like it was fun to write, which in turn makes it more fun to read. It's got nerd enthusiasm down, even when the story veers into mythology or horror, and it returns to that enthusiasm more than it dwells on the darker parts. Because of that, the whole set of these stories is entertaining and charming.

If you're looking for female-led UF that doesn't spend too much time in the bedroom but does bring in lots of cool ideas and builds a fascinating world and neat characters, these are the stories for you.