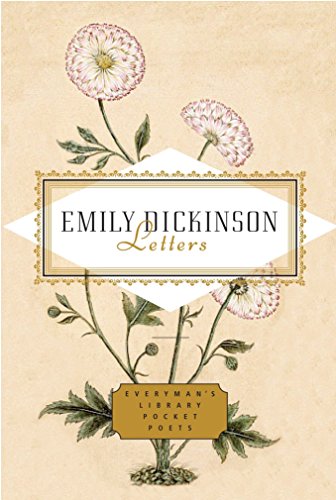 “Only seven of her nearly 1,800 poems were published while she was alive, but most of Dickinson’s verses were published by [Thomas Wentworth] Higginson after her death. Her words, poetry and letters live on in books like these.”

Emily Dickinson raised ponderous issues in some of her verses, and perhaps that’s the reason many love her poetry. Often she evokes readers’ contemplation, and usually she leaves no doubt about what she thinks about an issue; however, not all of Dickinson’s readers have such a deep interest in her work that they will want to read her correspondence, but this new collection of Dickinson’s letters nicely fills a small niche.

Editor Fragos, author of many books of poetry (Path, Il Maestro del Violino, Velocity, and The Art of Insane) has done a meticulous job collecting and editing Dickinson’s letters. She has employs a readable, mainly chronological structure, but also, she happily includes special chapters to highlight important facets of Dickinson’s life and character. One of these is devoted to the letters to her beloved mentor, Thomas Wentworth Higginson, a writer and literary figure of the era.

The Letters to various relatives, friends, acquaintances, and mentors will interest the scholar or fervent friend, for they are telling in several ways. First, they show Emily’s development from school age to her last years—a surprising change from a rather well-read, but vain girl at 16 or 17 who was mainly concerned with hairstyles, gossip, and potential beaus to an eccentric, reclusive adult. Second, the letters show the difficult, often tragic and complicated era in which the poet lived, one of the Civil War, barn burnings, and disease. Third, but importantly, Dickinson’s correspondence reveals many details that amplify her poetry. Some reflections in her letters are subtle, and others are clear, much like her more strident verses. All point to a brilliant, eccentric, and possibly troubled woman.

Dickinson is well known for her quirks, most prominently displayed in her verse. But it is in her letters that she shows traits like fierce independence with respect to important things like religion or art. For instance, her letters nearly mock her father’s strict views. She writes to her brother, Austin in 1854:

“. . . Father was very severe to me . . . so he gave me quite a trimming about ‘Uncle Tom’ and Charles Dickens and these ‘modern literati’ who, he says are nothing, compared to past generations…he thought (they) were ridiculous—so I am quite in disgrace at present, but I think of that ‘pinnacle’ on which you always mount when anybody insults you, and that’s quite a comfort to me.”

The letters also illustrate her lifelong love, a Dickinsonian agape, openly passionate and unconditional, a feeling she extended to family, friends, birds, and animals, especially her dog, Carlos, a large, brown Newfoundland, a gift from her father.

Romantic love in her life, if any, is unclear. There was speculation about Thomas Wentworth Higginson, her mentor who critiqued her poetry, but he met her only once and then found her presence draining. He described it bluntly: “I was never with anyone who drained my nerve power so much . . . I am glad not to live near her.”

Today’s scholars suggest that Emily fell in love with Charles Wadsworth, a Presbyterian minister some years older than she. This suggestion stems from the year 1862 that he moved to San Francisco. Emily was devastated. His absence in the community was possibly responsible for the flood of creativity in Emily. She wrote nearly a poem a day that year, and thereafter dressed only in white. No letters are addressed to Wadsworth in The Letters, but editor Fragos suggests one or more of the 1861 drafts of the three ”Master” letters are possibly written to Wadsworth. One is included in the collection.

Certainly, Dickinson’s letters raise as many questions as they give answers. They reveal, more than anything, the simple, but great, love of correspondence, in itself. Both her powerfully stated love and empathy are expressed in most of her letters, even those that are most cheerful.

Dickinson’s outspoken tone in some of her letters is shocking in light of the mannerly behavior expected of educated young women of her era. In a letter to Higginson she writes about her family: “I have a brother and a sister; my mother does not care for thought, and father, too busy with his briefs to notice what we do.”

Finally, Dickinson’s obsession with immortality is in much of her correspondence, understandably since many of the letters are sympathy notes. In a letter to Higginson, as she recovers from an illness, Dickinson writes:

“The only news I know
Is bulletins all day
From Immortality.”

Many of the letters, like the poet, are unconventional, if not eccentric or peculiar. Thus it is no surprise that many recipients did not write in answer to her correspondence. Most probably, they were perplexed. If so, after a time, in typical straightforward words, Dickinson would write again, pleading for mail and scolding them.

Only seven of her nearly 1,800 poems were published while she was alive, but most of Dickinson’s verses were published by Higginson after her death. Her words, poetry and letters live on in books like these.