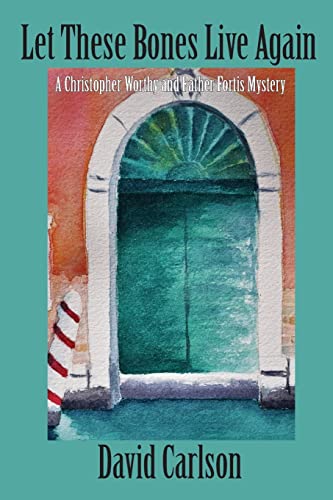 “Three people conducting separate investigations discover they are all investigating the same crime.”

“Venice is a lady with an infinite number of secrets and hiding places.”

Three people conducting separate investigations discover they are all investigating the same crime.

Allyson Worthy is an American criminology student interning with the Venetian police. She’s assisting with crime perpetrated against American and British tourists.

“Men claiming to be police confiscate their money, saying it is counterfeit. The tourists are given a number to call so they can be reimbursed but when they call the number, all they get is a weather report.”

Christopher Worthy, Allyson’s father, is a Detroit homicide cop called in to investigate the deaths of two American millionaires dying in Venice.

“What would compel anyone, especially American millionaires, to come to Venice, check in secretly to two of Venice’s cheapest hotels, and allow cuts to be made on their bodies, only to have the same site on their bodies violated again?”

Orthodox priest Father Nick Fortis is in Venice attending an international religious conference and continuing his studies in Byzantine chants when he’s asked to investigate robberies from several churches.

“The objects targeted by the thief are not works of art or even altar pieces, though some are gold, silver, or encrusted with precious stones. I am talking about relics, Father. Missing are pieces of bones. The theory is that the Russians are ‘stealing back’ relics taken by the Venetians in the twelfth century.”

When Worthy arrives, Allyson is assigned to the case with her father. Since the two have been estranged since her parents’ divorce, Allyson is doubtful they will be able to work with each other, but the arrival of Father Fortis’ culminates in the three meeting for dinner to discuss their cases.

There is nothing to explain why a famous film star and an American millionaire who is practically unknown, both dying of cancer, would come to Venice to die. A more important question is: Was it suicide or murder? And why do they have those meaningless incisions?

Allyson in the meantime, has gone “undercover,” posing as An American student—not so undercover, after all—and making friends with others from the university and local medical center in hopes of getting information on who might be daring enough to be performing illegal, clandestine surgeries. One of the students she meets is Giovanni who lets it be known he’s interested in Allyson, who finds herself liking him also.

Any romantic inclinations are interrupted, however, when a third body is found floating in one of Venice’s canals, and a Russian priest, a suspect in the relic robberies, disappears.

By now, things Allyson learns begin to come together. The scams she’s been investigating and things Giovanni tells her indicate he may be involved but whether he’s aware of the deaths is another story. Because of her distrust of her father, Allyson hasn’t told him of her suspicions about the young man she’s come to care for, and that may be not only her undoing, but Giovanni’s as well.

There’s a great deal of description of Venice as well as much history of the city. That, along with information about the schism of East and Western versions of Catholicism and the suspicion with which one faction views the other, combine to make the mystery of the dying millionaires a genuine puzzle.

The addition of Allyson Worthy to the duo of Worthy and Fortis gives another view of the crimes, though the reader may become a bit impatient with this young lady in regard to her attitude toward her father. Instead of allowing the fact of working with Christopher to become a healing process as she observes how her father throws himself into his cases with an almost obsessive zeal, Allyson merely looks upon them as how they affect her own contributions to the case. Thus, though some acceptance between the two is finally accomplished, she never fully understands why Worthy acts the way he does. This may make some readers experience disappointment in the character’s development.

As with the other two entries in this series, the homicide detective and the Orthodox priest form an unusual investigative team that, combined with the setting, make Let These Bones Live Again an intriguing mystery and an entertaining thriller.