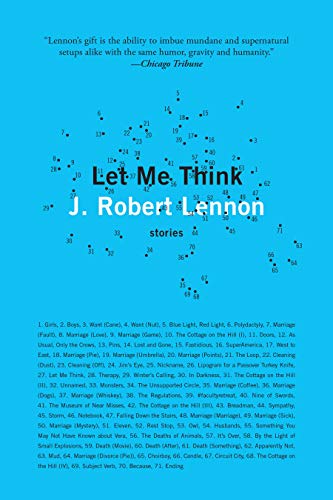 “Let Me Think is often frightening, but it’s wonderfully readable and surprisingly accessible. Its skin of conceptual literature conceals a wide-ranging sense of humor and a democratic commitment to story. These are . . . stories for everyone, and they deserve to be widely read.”

Let Me Think, J. Robert Lennon’s 13th book, is a wonderful argument for the value of surrealism. This sequence of 71 stories explores the lesser-known aspects of gender, marriage, childhood terrors, unreliable architecture, unstable landscapes, unstuckness in time, glass eyes, advertising, professorial activities, artisanal shopping, and Nabokovian museums. The stories vary from a couple of paragraphs to a few pages, but each invokes its own world and logic. As a whole, they present a rare and powerful insight into the instability of existence at this historical moment.

This is a book both unsettling and exciting to read. No story disappoints, and each offers a new uncertainty. The first story, “Girls,” announces young women’s ability to remain unseen. The power fades at 14 or 15, except when it doesn’t: “a very few women are thought to remain concealable for their entire lives. There are stories of ostensibly missing girls found dead in their homes decades later, as old women, the implication being that they were present all along, but unseen.” Yet turn another page and this whimsical fantasy is erased in favor of human wickedness in “Want (Cane)”: “I asked the old man if he was all right, but I didn’t really care. I was jealous. . . . I wanted to steal a thing with such grace, to be young and an asshole again.”

Lennon’s ability to summon worlds and characters in a handful of lines is unparalleled. What might take another author pages or chapters, he accomplishes almost immediately. Each brief text is its own world, such that the space between the book covers becomes a journey composed of rapid-fire dimensional shifts. The effect is of shifting perspectives at an unpredictable pace, but without blurring. Each character is real, each moment is fully itself. The reader’s unease comes equally from the sudden changes and the menace within the story itself.

The collection contains a few sustained pieces. These serve as long interludes in an otherwise unstable story-space. In “Red Light, Blue Light,” parents attempt to ease a child’s fears with a promise that the nightlight will change color if danger strikes, but they fail to account for the fervor of childhood vigilance.

“The Cottage on the Hill” appears in four parts scattered throughout the collection. In it, the protagonist returns multiple times to the same location, with each successive visit destabilizing his memories. On his second trip, “the structure itself was lower, broader. The clapboards were wider, and painted a peeling white, and the second floor seemed to be missing entirely.” On the third visit, the cottage’s materials have all been altered. In the last, reality breaks even before he reaches his destination: “halfway to the top, the houses are the size of sheds, and then doghouses, and when he his nearly there, they have become dollhouses.”

“The Loop” presents an apparently ordinary day in which a semi-retired professor and a young woman run errands for a charity. Each stop is a little less real than the last, but the result is far stranger. “The Unsupported Circle” explores the unlikeliness of interconnection through the absurdities of a team-building exercise. The magnificent “The Museum of Near Misses” presents a “cover” of Vladimir Nabokov’s “The Visit to the Museum” wherein the 45th American president becomes a source of cosmic terror.

Let Me Think is often frightening, but it’s wonderfully readable and surprisingly accessible. Its skin of conceptual literature conceals a wide-ranging sense of humor and a democratic commitment to story. These are, in spite of their extra eyes and fixation on unreliable of space and time, stories for everyone, and they deserve to be widely read.