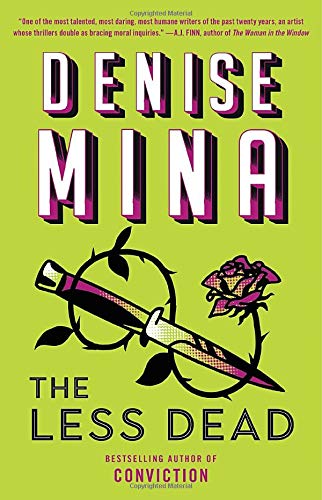 “Mina’s touch with the dark, gritty, and disturbing is that of an expert, and this book is a persuasive and frightening page-turner.”

Denise Mina has written two crime fiction series set in Glasgow, Scotland, establishing memorable investigators. The Less Dead is a stand-alone, also set in Glasgow, and circles around one bizarre situation: Dr. Margo Dunlop is pregnant, so she finally wants to know something about her own unknown mother. To her astonishment, as she tackles hoeing out the house where she’d grown up, raised by a loving adoptive mother, she finds a stash of letters addressed to her and never delivered. Letters from her birth mother’s sister, that is, Margo’s aunt, Nikki.

The first meeting with Nikki takes place at an agency that facilitates such reconnection. It’s an ordinary place, with an ordinary enough counselor, a bit over the top in her staged sympathy for Margo, but otherwise tame enough. Once Nikki walks in the door, though, all ordinary moments vanish from Margo’s life in a terrifying sweep of “the past isn’t even past.”

It turns out Margo’s mother was a murder victim, probably caught up in swapping sex for drugs at the time. And all these years, her aunt Nikki—sister of the murder victim, Susan—has been pleading (those undelivered letters, remember?) for Margo to help track down the murderer and avenge the murder at last.

Not so fast. An educated professional, Margo has no intention of being dragged into some crackpot scheme by the obviously eccentric and low-class Nikki. Still, now that she knows a little, she can’t resist looking up more, and even finds a crime photo online:

“Margo has dissected corpses. She has removed and weighed livers and lungs. She isn’t shocked by the sight of death or injury but she isn’t ready for Susan’s vulnerability and how young she is. She’s small for nineteen, childlike, and dead and dumped . . . No one was punished for this. They did this to a young woman and they’re still out there, walking around, eating biscuits, drinking tea. having Christmases. She feels the injustice of it deep in her gut, the way Nikki must have for decades, a cross between fear and nausea. It’s wrong.”

It’s not surprising that Margo, despite her revulsion, begins to think she ought to do something. But in a terrifying turn of the tables, she finds that opening the door to look into her past has made her the object of someone else’s threats and hatred. Is it an unrelated creep of some sort? Or does it have something directly to do with the pervert who killed her mother?

Mina’s touch with the dark, gritty, and disturbing is that of an expert, and this book is a persuasive and frightening page-turner. Take the tender parts when they come, as Margo must: realizations of friendships, alliances across class lines despite not wanting them, friendships among women strong enough to fight off the men on hand, whether they are uselessly well-meaning or frighteningly violent.

There’s nothing pretty about reading The Less Dead. And it’s the slowly growing desperation that Margo finally embraces, for some kind of justice for her mother and for her own safety, that pulls the book forward. Still, Mina continues to offer the distaff side of the looking-glass world that began with the classic Glasgow noir of the late William McIlvanney: Crime always involves women, whether as victims, partners, or even perpetrators. In Mina’s capable hands, they raise their voices and speak out. At last.