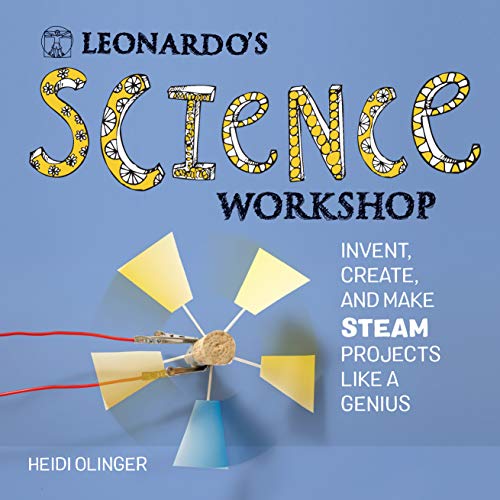 “Leonardo's Science Workshop is a book for highly intelligent children who enjoy self-directed science projects. It would make an excellent resource for teachers looking for multidisciplinary lesson plans with an emphasis on the pure sciences and technology.”

The full title of this book—Leonardo's Science Workshop: Invent, Create, and Make STEAM Projects Like a Genius—might lead you to believe that it covers inventions that Leonardo da Vinci came up with using steam power. Not so. Steam power wasn't harnessed until more than a century after Leonardo's death, and STEAM is in caps because it's an acronym for science, technology, engineering, art and design, and math.

The book begins by describing how Leonardo's insatiable curiosity about absolutely everything fueled his life and how “One topic of study for Leonardo informed the next, and in his notebooks they are all crammed together.”

Though there is considerable emphasis on multidisciplinary learning, the book's focus is most definitely on the pure sciences, math and technology side rather than the artistic side of Leonardo's genius. This will be reassuring to non-artists who enjoy science and technology but disappointing to those who were hoping to use drawing as a tool for learning about science, as did Leonardo.

Leonardo's broad range of interests included painting, sculpture, architecture, music, math, engineering, geology, astronomy, anatomy, botany, literature, history, and cartography. Somewhat misleadingly, the book pays little or no attention to the natural sciences of botany, anatomy, and geology and focuses instead on pure science topics that were entirely unknown to Leonardo. This was owing to the fact that the knowledge available to this Renaissance polymath was restricted to what could be seen with the naked eye.

Despite the limitations of his time, Leonardo's method of inquiry is certainly as relevant today as it has ever been. The book opens with a general introduction to his approach to studying the forces of nature, an approach that led to what would now be called the scientific method.

The reader is encouraged to follow the scientific method by making observations that generate questions. These questions lead to hypotheses that are then tested by experiments that result in the development of a theory to explain the observations.

The emphasis on repeating an experiment to obtain consistent and reproducible results is a valuable one. I tried out the two paper airplane designs in Chapter 1 and was surprised at how difficult it was to achieve consistent results because of variables such as the angle of launch and the force applied. We're told that Leonardo learned from his mistakes, and we're encouraged to do the same.

The brief introduction to Leonardo's methodology is followed by five chapters that explore different subject areas. We're given some background information on each topic and projects to enhance our understanding of the subject. A final chapter asks the reader to write a letter to Leonardo, describing what skills they've gained from executing the projects in the book.

Chapter 1, Take Wing, covers the topics of air and flight and includes a description of the chemical components of air, a subject Leonardo would have had no knowledge of.  The suggested projects include verifying that air has volume and learning about the four forces of flight by building and testing paper airplane designs, a parachute and a kite. Leonardo executed similar experiments himself and recognized that air is an invisible substance with volume that could support birds in flight.

Sample pages from Leonardo's notebooks showing birds in flight and designs for flying machines are scattered through the text. The reader is encouraged to make their own drawings of birds in flight. This is one of the few places in the text where free-hand drawing is encouraged, and it's with very challenging subject material and little in the way of instruction.

Chapter 2, Moving Along: The Science of Motion, introduces the terminology used to describe motion and suggests projects that test and enhance our understanding of scalars, vectors, and velocity and the difference between potential energy and kinetic energy. Newton's first law of motion, gravity, and buoyancy are also covered in this chapter, with projects designed to enhance our understanding of such topics.

The topic of energy is covered in Chapter 3, One Energy Source Flows to the Next: Light, Wind, and Electromagnetic Fields. After a brief foray into Leonardo's understanding of energy, we turn to topics that are well beyond his purview. These include atomic energy, electricity, and electromagnetic energy. A number of the projects involve contemporary equipment such as an electric motor used to build a wind turbine or batteries and light emitting diodes (LED lights) used to build an electric circuit.

Chapter 4, Designing Technologies, returns us to lower-tech technologies such as paper-making and an exploration of the scientific perspective used by Renaissance artists. Though this chapter is ostensibly one in which we might expect to find some art projects, the artistic skills required are minimal. We're asked to make drawings using ruled lines and mix food coloring to paint inside the ruled shapes.

Chapter 5, Rocks and Stars, encourages the reader to observe the night sky. Apart from the suggestion in Chapter 1 that we observe birds in flight, it's the closest we come to a direct connection with nature. Projects include studies of the phases of the moon and building a comet.

The inclusion of Leonardo's name in the title might lead you to believe that this would be an accessible way to introduce science subjects to children as young as ten. However, we soon leave the Renaissance era's understanding of scientific topics far behind as we delve into molecular chemistry, atomic physics, and electromagnetism.  Some of the more advanced projects could prove too challenging for the average child without assistance from a parent or teacher.

The book's author, Heidi A. Olinger, is the founder and president of Pretty Brainy, a nonprofit organization with the mission of empowering girls to gain STEAM. They design innovative learning tools that respects girls' genuine interests and evaluation of science, technology and math. Olinger may be viewed giving a TED talk on the importance of math education for girls.

Though her self-declared aim is to foster education in girls, this is nowhere apparent in Leonardo's Science Workshop, which should appeal equally to all genders.

Leonardo's Science Workshop is a book for highly intelligent children who enjoy self-directed science projects. It would make an excellent resource for teachers looking for multi-disciplinary lesson plans with an emphasis on the pure sciences and technology.