The Legend of the Golden Snail 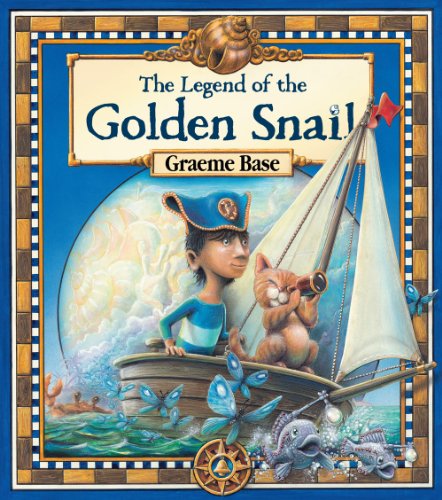 The Legend of the Golden Snail is an amazing adventure that will sail into reader’s hearts.

In Wibur’s favorite picture book, there is a legend about a Golden Snail sailing through a magical realm to its home in the Spiral Isles. A Grand Enchanter banished it there to the Ends of the Earth until a new master came to claim it, reciting a spell that will awaken it from its slumber.

Wilbur feels he is destined to be the next Grand Enchanter, so he sets off for the Ends of the Earth where he tells his mother that he will be gone for a hundred years. Her only request? To make sure he wears his captain’s hat.

Not feeling much like a Grand Enchanter, he becomes sad as his sails begin to lose the wind—until the butterflies he had helped whisk by and generate a tremendous wind. He then became ensnared in the Slithering Sea, until the sea monster comes to free him. A storm blows him into the Maze of Madness where he thinks he would be lost forever, until he sees the avenue of lights from the lantern fish to guide him safely along his way.

As Wilbur reaches the Ends of the Earth, saying the magic spell that will awaken the Golden Snail, he soon finds that his desire to be the Grand Enchanter wanes. It’s not what he wants anymore. He then commands the Golden Snail to take him to the Spiral Isles where he does something unexpected. It is there that he begins his next journey. What will Wilbur be in search of next? And what miraculous treasure will he find?

The author, Graeme Base, is well known for his vibrant and bold images that make the reader feel a part of the adventure. He has authored and illustrated many books that are equally as charming, such as Uno’s Garden, Jungle Drums, and Enigma: A Magical Mystery. Base’s fanciful locations create a smile as they draw the reader into Wilbur’s adventure, watching him unknowingly be the best captain that ever was.

Children between the ages of 4–8 will especially enjoy trying to find the hidden snail and crossbones that are hidden throughout this 48-page picture book.