The Legal Profession: What Is Wrong and How to Fix It 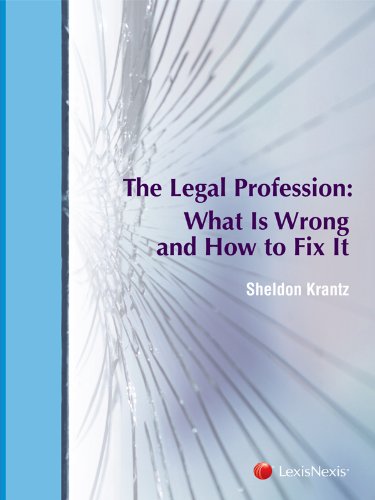 “In order for ‘equal justice under the law’ to be a reality, that justice must be affordable for and accessible to everyone.”

Do not let the title put you off. The Legal Profession: What Is Wrong and How to Fix It needs to be read by people both in and out of the legal profession.

Without a push, the legal profession will continue on its current path of doing nothing to reform. In 1905, the Carnegie Foundation issued reports with recommendations for changes in the education of lawyers and doctors. In 2005, the Foundation released an update noting that the medical profession had adopted the 1905 recommendations but that law schools continued to teach as they did 100 years earlier. That is telling.

Until there is an uprising of righteous anger outside of the legal profession, nothing will change. In order for “equal justice under the law” to be a reality, that justice must be affordable for and accessible to everyone—regardless of how much money they have in the bank.

“Perhaps the most damning indictment against the legal profession is that it has become greedy and self-focused and largely ignores serving those in need who do not have the money to hire us.”

Professor Krantz gets it right with that one sentence. Most lawyers and law firms are more concerned with profits than with ensuring equal justice for all. A majority of low- and middle-income people lack the resources to retain legal counsel when needed. Most lawyers cannot afford to hire a lawyer. This situation has existed for many years and there is no indication things will change in the foreseeable future.

A great deal is being written about how the legal profession must change or find itself irrelevant. For some time Richard Susskind has been the lone voice lamenting the lack of initiative and creativity of the legal profession. He now has company. Professor Krantz’s book is the most recent effort to address the issue and suggest a fix.

Professor Krantz underestimates the number of lawyers practicing in the U.S. today. According to the 2012 American Bar Association National Lawyer Population by State count there were 1,244,120 lawyers in the country—that’s 39.63 lawyers for every 10,000 people. Unfortunately, most of those lawyers do not represent most of those 10,000 people.

Professor Krantz writes at length about the Access to Justice Crisis and the legal profession’s responsibility to address and resolve it. He has some good ideas on how to proceed including: eliminating the monopoly precluding non-lawyers from helping, mandatory pro bono, increasing public and private funding for legal services programs, and identifying ways to “de-legalize” matters. All of these are excellent ideas. The problem remains how to get the legal profession to participate.

The medical profession has been increasing reform participation of non-physicians in the health care field. These include midwives, physician’s assistants, and nurse practioners. The legal profession needs to do the same.

Rather than reacting like toddlers whose toys have been taken away, lawyers need to figure out a way to make the justice system work for everyone. A pro se (representing yourself) divorce clinic in Cleveland was opposed by the family law section of the local bar association because the lawyers saw it as contributing to their losing paying clients. The majority of participants in the clinic were homeless, on SSI, or working minimum wage jobs. The average monthly income was under $500. None of the lawyers could explain just how those folks were going to pay a lawyer to help them instead.

And Krantz understands the legal profession is not limited to lawyers—judges and law schools are also part of the problem and can be a primary source of a solution. All it takes is some imagination, creativity, and guts. Unfortunately, most of the legal profession lacks all three—unless charged with the task of earning more money, then they have it in spades.

Professor Krantz has written a book that needs to be circulated and discussed. The situation is not getting any better. Law schools are graduating thousands of new lawyers every year, and there are not enough traditional jobs for them. The profession needs to reassess and reimagine its place in society. A justice system only works if those least able to pay for assistance continue to have access.

Krantz gets that. And The Legal Profession: What Is Wrong and How to Fix It reflects this knowledge.