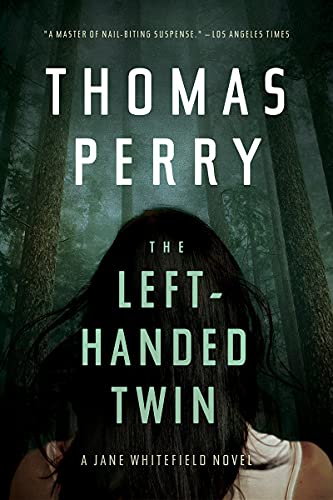 “The Left-Handed Twin is a disappointment.”

There’s absolutely no doubt that Thomas Perry has been one of the most formidable authors of suspense thrillers to come along in quite some time. With 28 previous books under his belt, he’s attracted a large and faithful readership with strong, Reacher-like characters who happen to be female.

After recent standalone successes such as A Small Town (2020), Perry has decided to return to his signature protagonist, Jane Whitefield. A rescue artist, Jane helps endangered people disappear to a new life and a new identity. While doing so, she’ll take whatever measures are necessary to protect her client, no matter what might be required.

Her new client in The Left-Handed Twin is Sara Doughton, who’s on the run from Los Angeles. Sara witnessed a murder committed by her boyfriend and testified against him, but when he was acquitted he vowed to kill her for her betrayal.

However, when the boyfriend, Albert McKeith, involves a gang of Russian mobsters in his pursuit of Sara, Jane finds herself the primary target. The Russians have heard of a woman who can make people disappear, and they’d very much like to sell the information in her head to the nasties still looking for her former clients.

Jane Whitefield is a consistently strong protagonist. A Native American whose Senecan great-grandfather moved from the Tonawanda reservation at the turn of the previous century to build a house in upstate New York that she still maintains, Jane remains plugged into the culture, values, and world view of her ancestors.

Of interest in this novel is Perry’s use of dreams to fuel Jane’s decision-making processes. While running with Sara she dreams about Harry, a murdered gambler she failed to help escape. “People in my family’s religion get messages in their dreams,” she says to him. Harry’s message is that Sara is a problem and that the recently enlisted Russians are less interested in her client than they are in Jane herself.

Later in the novel, when she seeks to elude four Russian hit men by heading into Maine’s Hundred Mile Wilderness, the harshest portion of the Appalachian Trail, she dreams of an Onondawaono man, an ancestor who reminds her that her best weapons in this life-and-death struggle are her ears, her eyes, and her mind.

Perry doesn’t want us to think he’s venturing very far into Indigenous mysticism, though. The Onondawaono man reminds Jane: “I’m an electrochemical reaction in your brain. I don’t know things you don’t know, but you can use me in another way.” Through the dream, she reconnects with her knowledge of wilderness survival in the face of violent conflict.

However, while Perry has chosen to return to Jane Whitefield to re-stimulate the series, this particular effort isn’t quite up to his usual high standards.

Sara and Albert worked the L.A. party scene as go-betweens, dealing in high-end consumables, invitations, and so on in exchange for cash and other considerations. It’s a very interesting sub-theme, but after Perry walks us through it from Sara’s point of view he does so again from Albert’s perspective, a repetitive and momentum-killing error.

In fact, Perry’s decision to tell a portion of the story from Albert’s point of view is a miscalculation in general. While he does so in order to provide an external tracking of the pursuit of Jane by the Russians, Albert is a flat and tedious character beyond the party scene. His interactions with Russian mob girl Magda in particular are a dull waste of time.

Then, just when the plot should be building the suspense toward a violent clash between Jane and the Russians at the climax of the story, Perry drags us through scene after scene in which Albert tags along with the mobsters in their ongoing pursuit, trying to help so they won’t put a bullet in his head.

Page after page dwells on travel arrangements, hotel reservations, and who sits where in their Chevy Tahoe or on the airplane. Seriously. None of it’s meaningful; the story slows to a crawl just when it should be accelerating; and we begin to skim, looking hopefully for something interesting, never mind exciting, as the back cover of the book looms closer and closer.

Indeed, this novel is oddly flat, leaving us to wonder if this was a manuscript left in a drawer for several years and finished more by rote than from fresh inspiration. Or perhaps a trip down memory lane, a chance for the author to revisit past successes.

Either way, The Left-Handed Twin is a disappointment. One can only hope that if Perry intends to pick up where he left off at the end of this one, he will put a little more consistent zing into it next time out.