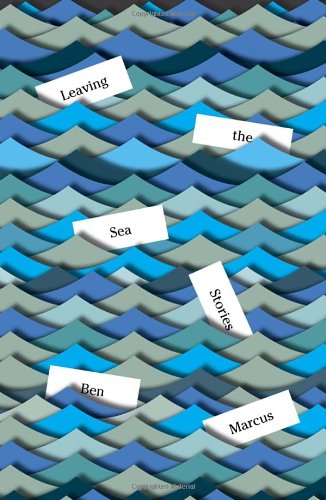 “Leaving the Sea is recommended to serious readers . . .”

Ben Marcus, author of the novels Notable American Women (2002) and The Flame Alphabet (2012), returns to the short story in Leaving the Sea.

The NYJB review of The Flame Alphabet described that book as “his most accessible to date” and Marcus as “a daring, experimental writer’s writer.” The first four stories in Leaving the Sea (grouped together in the first of the book’s six sections) are its most accessible, while the remaining 11 stories are challenging, experimental, and require multiple readings to be fully appreciated; fortunately they are well crafted and reward rereading.

In all 15 stories the protagonists are men. In the first four they are under-appreciated, disrespected, and/or taken for granted: a former ne’er do well and habitual liar visits his family of origin who don’t believe him when he says he’s turned his life around, is gainfully employed, and has started his own family; a creative writing professor takes a job teaching a writing workshop on a cruise ship to supplement his modest income and has to put up with disrespectful hobbyist students; the girlfriend of a cancer patient undergoing experimental treatment in Germany turns out to be a fair-weather friend who abandons him at his time of greatest need; a divorced father finds he can rely on neither his ex to keep up her share of childcare nor his corporate workplace’s daycare facility.

After the realism of the first section Marcus returns both to The Flame Alphabet’s dystopian and apocalyptic themes and to the formal experiments of his earlier work. Throughout Marcus explores the gap between the characters’ true selves and the conformist roles others expect them to play.

Character development was one of The Flame Alphabet’s weaknesses, and in this book the characters use profanity to express their frustration in what sounds (or reads) like the same voice despite their different names in different stories.

The two stories in section two are philosophical dialogues in the form of interviews. Each of the interviewees eschews conventional societal roles to escape an unspecified catastrophe.

The first reverts to infancy as a 71-year-old child who speaks in adult academic jargon: “My ethics? I’d like to shed the strictures of adulthood and make maturity an optional result of a freely lived human life, not the necessary path to power and success, lorded over by depressed, overweight, unimaginative corpses.”

The second interviewee is a cave dwelling survivalist recluse: “In some sense, my feelings toward my wife and children are more intense when the moment is not complicated by their presence, and there is no accounting for the magnification that happens when we are swaddled by earth, fully enclosed, necessarily free of people.”

Section three has two stories on the theme of filial piety. In the first the narrator watches British television mysteries with his frail elderly mother, but as a writer he needs solitude yet realizes that every time he leaves her the likelihood she will die in his absence increases. The second is a dark dystopian fantasy in which people are being evacuated according to a strict protocol, and the protagonist is reprimanded for bringing his parents with him.

Section four comprises a single 15-page story, “The Father Costume,” which appears to be a condensed version of Marcus’ 2002 56-page illustrated book of the same title. Here again we are in dystopian territory; the blurb from the 2002 book describes the 2014 story: “. . . a stunning world, made mostly of water, where clothing changes people's behavior and time itself can be worn and discarded like cloth” where “. . . a father takes his two boys out to sea, in flight from some menace at home, thus launching their adventures in a strange and dangerous territory.” Marcus’ prose in this story is quite handsome and reminiscent of The Flame Alphabet.

Dystopian themes continue in section 5’s five stories which describe in detached, cerebral prose an atomized nearly solitary alternative reality where being wet and boneless is considered ideal and in which familiar words have new definitions: “She used American sounds known as phrases. . . . In daylight she wore motion-limiting weights called shoes. . . . The five knives of her hand were once called fingers.”

In “Against Attachment,” the fourth of the section’s five stories, each paragraph feels like a prose poem. Here too words are redefined: “Shadows were blind spots that everyone shared. Graves were called homes, and apologies known as writing were carved in their surface.”

The final story in the section and the book’s title story is an example of stream of consciousness prose virtuosity in which the author demonstrates his command of conjunctions in a five and a half page run-on sentence.

In section six the book concludes with “The Moors,” a 42-page story previously published as a chapbook in 2010, which takes us inside the head of Thomas as he stands in line for the coffee cart at work behind a female colleague and thinks about how to start a conversation with her. Unlike the cold cerebral stories in section five, in “The Moors” Marcus explores Thomas’ turbulent inner emotional life.

Thomas is Jewish and a married father, and like his author who was raised a patrilineal Reform Jew, “To the Jews he knew, Thomas was not really Jewish, and yet to the non-Jews he sure as hell was as Jewish as it ever could possibly get.” Unlike Marcus, Thomas is obese and socially awkward.

Leaving the Sea is recommended to serious readers who will want to reread its stories gaining new insights with each reading.