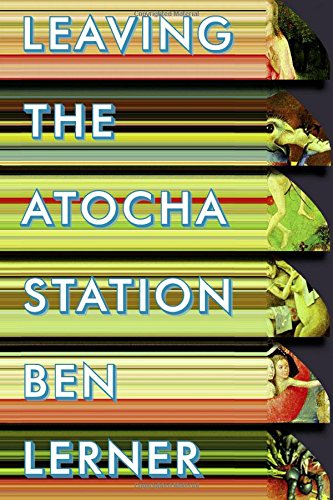 “Mr. Lerner can set aside the self-doubt: Leaving the Atocha Station proves he’s a droll and perceptive observer, and a first-rate novelist.”

“It’s not really art. I could do that.” We’ve all mumbled something like this under our breath leaving an art gallery or after reading a non-synchronous poem. It unnerves and angers us when we suspect that the art we just patronized might be a fraud. We hate thinking that we might be dupes.

Well, if we are dupes, Adam Gordon is a skilled duper: He’s living off a prestigious graduate fellowship in Madrid where he periodically studies Spanish poetry, but mostly he drinks wine, smokes hash, and suppresses the guilt arising from his duplicity. This is the set-up for Ben Lerner’s cerebral debut novel, Leaving the Atocha Station, set in Madrid immediately before and during the savage terrorist bombing of the city’s main train station.

Mr. Lerner uses Adam to poke at the American intelligentsia in Europe. Adam is immature, pampered, walks in faddish leftist circles, and fakes, rather than attains, sophistication. Lerner sends up the pervasive intelligentsia disdain for George W. Bush and U.S. military interventions—less, I assume, because Lerner is a closet neo-con than because he is irked by the stifling conformity among these ex-pats and their fancy European companions. And Adam is no better in demonstrating a reflexive contempt for American tourists—people whose greatest sin is not being blessed with his educational opportunities and parental subsidies.

An oft-published poet prior to this book, perhaps it is to be expected that Mr. Lerner’s study of language is among the most interesting aspects of this book. Adam is not fluent in Spanish and Lerner offers numerous phrases heard and spoken in confused or inaccurate phrases. In the absence of fluency, Adam becomes an expert (or at least perceives himself an expert) at nonverbal communications: He raises eyebrows, looks off into space, or smokes sullenly to portray complexities that he cannot express verbally. Whether anyone besides Adam really understands his pantomime is left tantalizingly vague, but Adam certainly believes in the power of his expressions. His narrative includes many statements like, “When I felt my face had made its point, I left him without saying excuse me.”

No doubt, there are many autobiographical elements to Leaving the Atocha Station. Like Adam Gordon, Mr. Lerner is a poet who studied in Spain, won various academic awards, and has connections to Topeka, Kansas and Providence, Rhode Island. From this we can logically infer that Mr. Lerner, like Adam, has wrestled mightily with self-doubt and the possibility that his scholarship and poetry might be—on some level—a fraud. This gives Leaving the Atocha Station whiffs of autobiography, even though Lerner is too clever to delineate between confession and the mining of personal experience to create authentic fiction.

In any event, the complexity and grace of Mr. Lerner’s writing proves he’s no fraud. Leaving the Atocha Station puts Lerner among a clique of acclaimed contemporary authors—perhaps most notably Philip Roth—who deliberately blur the line between autobiography and fiction. Leaving the Atocha Station is a more modest book than, for example, Roth’s Operation Shylock, but still provides compelling narrative even without a grandiose plot.

Mr. Lerner can set aside the self-doubt: Leaving the Atocha Station proves he’s a droll and perceptive observer, and a first-rate novelist.