The League of Regrettable Superheroes 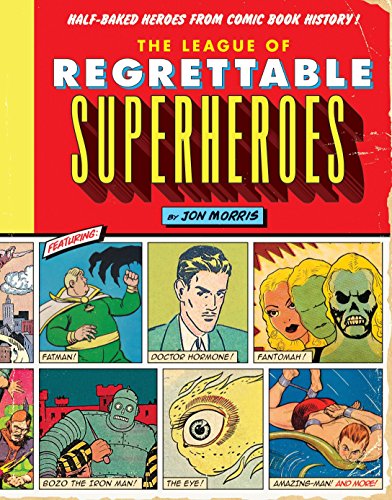 “a wealth of comic art and undeniable fun.”

For every Batman, Hulk, Spider-Man, or Superman that made it to the big time, there are hundreds of comic book heroes who were left behind. Despite the best intentions of their creators and publishers, those poor unfortunate and gifted souls never made it. Some never made it past one single issue.

This is where the fun in comic book history lies. Any goofball with access to the Internet can write another book about The Flash or Captain Marvel, but it takes skill to make the weird, the strange, the forgotten, and the absurd so damn interesting.

In The League of Regrettable Superheroes author Jon Morris does just that. With a nod, a wink, and a good amount of both bad and magnificent art, he brings the stories of B’Wana Beast, Pat Parker, War Nurse, Brain Boy, Funnyman, The Ghost Patrol, Captain Tootsie, and many others back to life.

This compilation is essential reading both old and new fans who revel in the art of comic books. Using the same eras as collectors and historians, he divides his overview into The Golden Age (1938–1949), The Silver Age (1950–1969) and The Modern Era (1970–present).

Some hardcore fans may quibble with the heroes he chose to include as well as the exactness of his timeline. But his logic speaks for itself. Every hero he features includes a detailed description of their powers as well as an explanation for why they deserve to be included.

It would be easy to assume that the regrettable heroes might be confined to the earliest days of the comic books. But they aren’t. In Morris’ compilation the heroes as broken down by time frame are proof that the exceptional and the odd cross over every era.

This isn’t just a collection of characters who appeared for an issue or two and disappeared. That would be too easy. Morris challenges the reader on almost every entry. He takes the time to dissect the absurdity in heroes such as Doll Man and Kid Eternity that, in their day, sold well and held a strong fan base before they faded for various reasons.

It is clear that Morris not only loves the heroes he documents, but he knows the complicated world of comic books very well. He has a fine eye for the way that comic heroes often seem to relate to other heroes in the field.

In one paragraph he links Bozo the Iron Man (also known as Bozo the Robot) to not only Iron Man but other robot heroes who have appeared in the medium across the years as well. He is also draws important distinctions between heroes who seem to have so much in common. There is an important difference between Robotman (DC), who has had his brain transferred into a mechanical body; Bozo the Iron Man, whose story is inconsistent; and Tony Stark building a suit we know as Iron Man (Marvel). They are three very different types of mechanical men!

Morris’ history is tight as he also recognizes Bozo as one of the first heroes to appear in the wake of Superman’s success.

The explosion of superheroes that happened after the introduction of Superman in Action #1 (June 1938) blew everyone’s minds. Publishers who had been ignoring the comic book market dropped what they were doing in order to get kids to part with their dimes. This may account for why so many of the more absurd heroes come from the Golden Age.

It was an era of throw everything against the wall and see what sticks. To think that someone created The Eye, Speed Centaur, The Face, Kangaroo Man, Fantomah, and the Clown and then expected them to find success stretches the imagination. Many of these creations need to be seen in order to be believed.

The most terrifying recurring hero from this time may be Mother Hubbard. Published by Harry “A” Chesler in 1941, she lasted a mere three issues. Unlike many other heroes who were created with maximum physical attractiveness in mind, Mother Hubbard was in fact an old, sour-faced witch complete with hat, broom, cape, buckled shoes, and a broomstick to ride on.

She derived her powers from a supernatural source just like more successful heroes such as The Spectre. This isn’t what made her short run so terrible. It was the crime committed by her opponents. After taking on some Nazis she fought a race of gnomes who were hell-bent on prying the eyes out of children by using a crowbar. . . . This was after they stole souls from young boys. . . .

The complication isn’t just a grab bag of foolish concepts to laugh at. Morris shows real insight into comic history. For the origin of Miracle Man he reminds us how far reaching the consequences of DC suing Fawcett over Captain Marvel really were.

While the majority of regrettable heroes came from smaller publishers the majors DC and Marvel have a few in the listings.

As the Silver age gives way to the Modern Era both houses have their own fair share of missteps. DC with Ultra the Multi Alien, The New Guardians, and the modern sons of Superman and Batman. Marvel with 3-D Man, Brother Voodoo, and finally Maggott and other regrettable X-Men.

While the narrative focus stays on the heroes the compilation contains some fantastic art. Whether it is the primitivism of Fletcher Hanks or the detailed work of Wally Wood, the art remains an important part of the story.

Bonus points for reprinting some great and forgotten covers. Hit Comics #5 (Nov 1940) is one of the great shark/deadly fish covers of all time. Hit Comics #52 (May 1948) features George Washington, Rip Van Winkle, and Tecumseh rushing to fight crime next to Kid Eternity.

This is a wealth of comic art and undeniable fun.