Lay Down Your Weary Tune 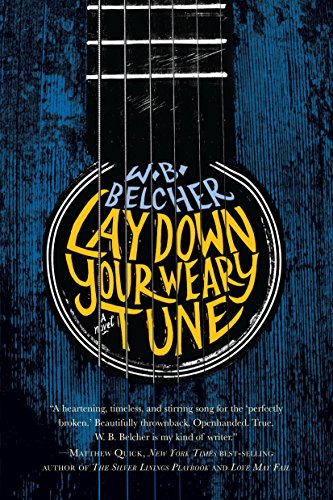 W. B. Belcher’s first novel Lay Down Your Weary Tune is the kind of book you start reading and don’t put down until you reach the last page. His writing style rings clear; it is lyrical, but at the same time confrontational.

His main character, John “Jack” Wyeth is a jack-of-all-trades regarding anything relating to music. A would-be musician and a freelance writer, he is hired to write the life story of Eli Page, a 60s/70s/80s musician in the style of Bob Dylan, who has wandered into the final season of life unclear of his direction. Eli has been Jack’s hero since his childhood, and this offer is one he cannot turn down.

As with most best laid plans, this one goes awry immediately when Jack takes up residence at Eli’s home in the small upstate New York town of Galesville, where newcomers are not welcomed. It is here that he realizes Eli’s mind can move between coherent and irrational at the speed of light.

Eli is not cooperative about having his story told, and Jenny Lee Flynn—Jack’s new love interest—makes the task even more difficult, as she is protective of Eli and reluctant to provide any details about his life.

Life with Eli is difficult and challenging for Jack, made no easier when a series of crimes occur within the town and fingers begin to point at Eli, the outsider, as the perpetrator of these crimes.

Add to this the bumpy relationship with Jenny, who is often moody and pursued by Cal, a state trooper who has no use for either Eli or Jack, and the emotion and tension ramps up exponentially throughout each scene.

Belcher’s command of the language, his selection and use of words, and his ability to paint clear pictures of the people and locations make this story worth reading. But his taking his writing one step further and probing into the soul of his main character is the real attraction.

Written in the first person from Jack’s point of view, Lay Down Your Weary Tune has the reader crawling into the narrator’s soul and experienciing life as Jack experiences it. As all main characters should, Jack grows throughout this story. He starts out as a man with little or no direction in his life and evolves as he encounters the precipitous ups and severe downs that make up his encounters with Eli, Jenny, and Cal.

Belcher brings the story to a clear and satisfying end, tying up all of the loose ends and answering the questions posed throughout the story.

This is definitely a page-turner and one that belongs on every reader’s library shelf.