Lawless and the Devil of Euston Square: Lawless 1 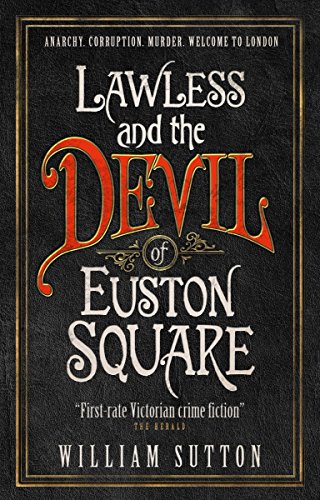 “superb characters, the complex and convoluted plot, and the vividly rendered setting lift this historical mystery into the realm of literary fiction.”

Murder and history blend in a historical mystery set in the middle years of Queen Victoria’s reign during England’s transformation into an industrial power.

Abandoning his father’s plans that he become a clockmaker, Campbell Lawless leaves his home in Scotland to became a novice detective in London. It is 1859, and England, London in particular, is flexing its industrial muscle in new directions, including building an underground train system in its capital city. Fortunes are made as the public rush to buy stock in the new underground system and in the companies building the necessary machinery.

The city of London is expanding into formerly rural areas and poor urban areas with their decaying buildings are being abolished to make way for the new underground and the new sewer system approved after the stench of raw sewage dumped in the Thames finally invaded the halls of Parliament. While the government and companies pay lip service to the thousands of the desperately poor being evicted from their homes to make way for construction, and promise to provide new homes for those made homeless by progress, very little is being done.

As this volatile situation swirls around him, Lawless serves as a lowly constable walking a beat and doing desk duty during the night shift. Eager to prove himself an amiable officer eager to make a good impression, Lawless agrees to fix his superintendent’s watch.

He soon regrets his decision. “Within the week, watches were arriving from senior officers from Wapping to Westminster . . . I realized I had been hot-headed in quitting my apprenticeship in Father’s workshop, all that repairing would have earned me double my constable’s pay.”

Lawless soon earns a nickname by which he will always be known: the Watchman.  It’s not a moniker he likes, and he worries that he will never be more to the police force than the constable who repairs watches. Even the tea lady brings him a clock to repair in exchange for extra biscuits at elevenses. Three months in London as a policeman, and he has had not a hint of adventure.

All that changes when a street urchin named Worm, of the Euston Square Worms, summons him to assist the famous Inspector Wardle of Scotland Yard in investigating an incident at Euston Square. “The great inspector,” he said, “requests the use of your habilities. We had heard they was considerable, hard though that is to credit on current showing.”

Taken aback by Inspector Wardle’s choice of messenger, Lawless doesn’t hesitate the follow the dirty young boy across London to Euston Square. “The stage of great events lay before me. Step forward with confidence, and I might find myself amongst the principal characters of London—in the world, no less.”

Lawless’ expectations are high, but the reality fails to meet them. He arrives at the unfinished entrance to Euston Station to see a huge spout of water from a hydraulic machine that powers cranes to lift heavy loads, including a massive clock meant to be mounted above the station’s entrance. Lawless is needed for his expertise as the Watchman, not as a policeman.

Lawless climbs the crane to investigate the state of the clock. He finds that all its internal machinery has been removed, though for what purpose Lawless can’t imagine.

No one, including the inspector, seems all that interested in the missing machinery in the clock. Neither is anyone that concerned about the dead body found near the accident. When Lawless attends the autopsy he learns the man was dead under suspicious circumstances before the hydraulic accident, so he could not have caused it. Lawless, now promoted to sergeant under Inspector Wardle, writes his report but it either never reaches the proper person or is ignored.

Inspector Wardle considers the Euston Square case closed and turns his attention to a series of home robberies in which nothing or very little is stolen, despite the fact the homes belong to very wealthy or influential people. The thief or thieves leave behind a bone, possibly to entice a family watchdog—except not all the homes had dogs.

Meanwhile, Lawless is put to work perusing and discarding 40 years’ of Wardle’s cases, so the inspector can retire “with his house in order.” Lawless soon finds that some cases are not closed, but concluded without an arrest, as was the Euston Square case.

Without telling Wardle, Lawless continues his investigation, interviewing Coxhill, the owner of the hydraulic machine, the clockmaker who built the massive clock, and the night porter at the morgue who had something to say about the body found at the scene of the accident. The interviews raises even more suspicions.

Lawless begins researching in magazines and newspapers at the British Museum for instances of other industrial accidents. With aid of a librarian who announces that “I’m quite an expert at solving mysteries,” Lawless finds evidence of a revolutionary named Berwick Skelton whom may be the man behind all the puzzling events.

Historical figures such as Karl Marx, Prince Albert, and the Prince of Wales add a note of historic realism to the story, while the London setting provides a sense of You Are There to the story. The time line of the narrative, from 1859 to late 1862, does diminish the suspense one expects in a mystery.

Mr. Sutton weaves newspaper accounts into the narrative to illustrate the social unrest of the period, creating a montage of London history. His superb characters, the complex and convoluted plot, and the vividly rendered setting lift this historical mystery into the realm of literary fiction.