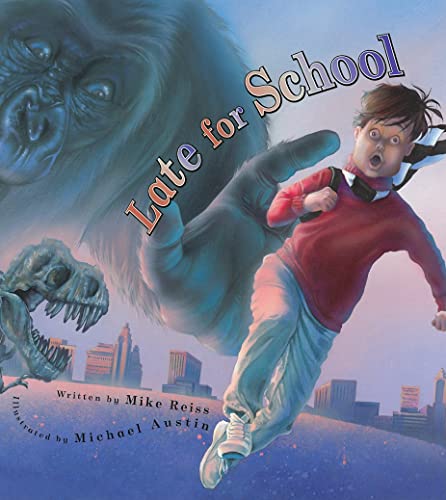 Steve Martin has been successful with most everything he touches or puts his mind to. He has written and acted in numerous films and a play; won an Emmy and Grammy, as well as written for prestigious magazines and newspapers. Late for School is his first published children’s picture book.

The pages of Late for School include three art forms boxed into one. There is prose and music (accompanying CD) by Martin and illustrations by Payne. The pictures and music are a delight, but the words lack any strong characterization or memorable lines that could stand on their own. Some of the vocabulary may stump younger readers (grammar slammer, depressed, accelerate, aviate, evaporate), while older children could find the rhymes, such as smash/dash, right/kite and my/pie, a tad elementary.

Here is an example of some of the writing, which sounds good musically (with accompanying banjo), but feels disjointed and out of sync on the page alone:

I feel like I’m sailing
But, uh-oh, the wind is failing
Now I’m headed downward,
Ground-ward,
Clown-ward,
To the school.

When these same words are used as lyrics, they come to life (even though Mr. Martin doesn’t have the strongest voice). All of the writing in the book is condensed onto the back page for a “Sing Along!” where you (and yes, even your children), can plop in the CD and give it your best shot. The performance on the CD will remind those familiar with Steve Martin’s earlier days and his a stand-up routines, when he’d pull out his banjo and seemingly make up humorous words and situations as he went along.

In addition to the music, the other highlight of Late for School is the vibrant illustrations by C. F. Payne. They capture the story and the boy’s emotions with great clarity and depth. The look on the young man’s face when he trips on his shoelace is priceless. In fact (or fiction), the main character in the book could be a dead ringer for what one might imagine to be a young Steve Martin.

Is this one of the best children’s books ever written? No. Does it have a wonderful surprise ending? Yes. Are the illustrations, music, and theme well presented? Definitely. Is this work of accompanying art forms worth the admission price? Absolutely. It may not have you telling others that this is a must read, but it will give you and your child an opportunity to talk about education and might even get you up on your feet singing and dancing to the tune of “Late for School.”