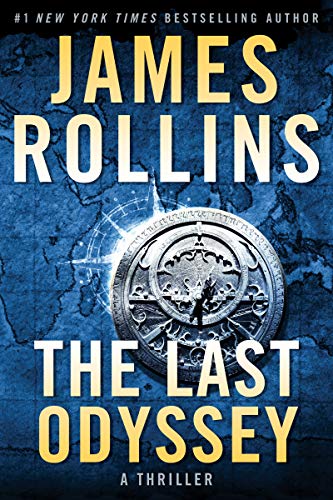 “Make no mistake—this is what reading for pleasure is all about. The Last Odyssey is fast, fun, and thoroughly entertaining.”

Deep beneath the ice of Greenland’s Helheim Glacier, in a meltwater cavern in the Sermilik Fjord, nautical archaeologist Dr. Elena Cargill has been summoned to consult with a scientific team on an astounding discovery. Half-encased in the ice is a ninth century dhow, an ocean-going vessel that originated somewhere in the Arab world. How did it sail all the way north to Greenland, and why is it here, stranded beneath tons of glacial ice?

Boarding the boat to examine its collection of fascinating artifacts, Elena and the other scientists are suddenly attacked by unknown invaders intent on claiming the discovery for themselves. Scrambling for their lives, they inadvertently unleash destructive forces from the ancient past that threaten to obliterate everything—and everyone—around them.

Once again, Sigma Force must venture where normal humans fear to tread. To prevent a tyrant from setting off a campaign of global destruction, the team must retrace the winding homeward journey of Odysseus, assembling clues along the way from a strange, priceless artifact found in the dhow. At the end of their odyssey they’ll find the answer to the mystery—and a showdown of mythical proportions.

The Last Odyssey is the latest Sigma Force tale from bestselling author James Rollins, and it pulls out all the stops. The Sigma Force characters are familiar and comfortable to readers following the series, the story is written to be read at break-neck speed, and the underpinning of legend, history, and treasure captures our interest and holds it throughout.

Within the thriller genre there’s a pocket universe of adventure/historical thrillers featuring relentless action, elaborate puzzles, treasure hunts, and clues from the past. Following in the footsteps of H. Rider Haggard, the 19th century author of King Solomon’s Mines, She, and Allan Quatermain, masters of the modern-day sub-genre such as the late Clive Cussler, Dan Brown, and Douglas Preston/Lincoln Child have treated readers to a wide range of adventures over the years. It can be argued that James Rollins has now risen to the top of the roster.

Although it will never be mistaken for a literary classic, The Last Odyssey generates plenty of interest by drawing its basic shape from a key work of classical literature, The Odyssey by Homer. For readers who may have avoided the original epic poem because of its dryness and daunting length, Rollins’s thriller makes the ancient tale not only accessible but mysteriously fascinating.

As is often the case in novels of this kind, Rollins bolsters the story with plenty of learning aids. The book is prefaced with maps, “Notes from the Historical Records,” and “Notes from the Scientific Records” so that we have a reasonable grounding in the basics that underpin the storyline.

Add in photographs of the priceless object guiding them on their journey, more maps, illustrations of key clues, and a concluding “Author’s Note to Readers: Truth or Fiction,” and we’re all set to hop on board with Grayson Pierce, Seichan, Kowalski, Maria, and the other Sigma Force team members as they set sail across the Mediterranean on a mission to rescue Elena Cargill, search for the Gates of Hell, and uncover the answers to a mystery that has persisted for centuries.

Make no mistake—this is what reading for pleasure is all about. The Last Odyssey is fast, fun, and thoroughly entertaining.