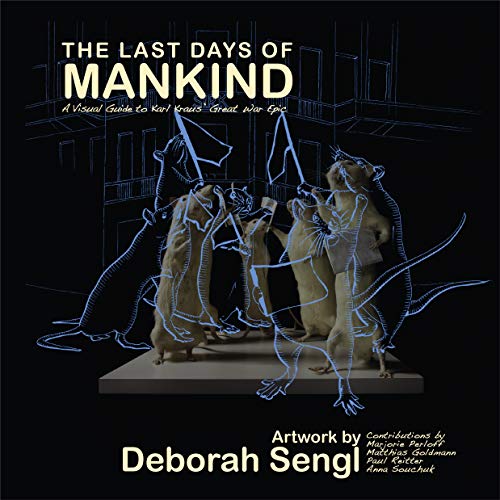 The Last Days of Mankind (Die letzten Tage der Menschheit) was written by the Austrian critic and philosopher Karl Kraus. The play’s notoriety lay in its unwieldy length and run time. “Kraus himself remarked that a performance ‘would take some ten evenings in terrestrial time’ and so was fit ‘for a theatre on Mars,’” Marjorie Perloff states in her introductory essay “Deborah Sengl’s Karl Kraus.” The Last Days of Mankind: A Visual Guide to Karl Kraus’ Great War Epic by Deborah Sengl is her eccentric adaptation of Kraus’ gigantic play. Sengl, herself an Austrian artist, stages the Kraus play in several dioramas using taxidermied white rats.

Why rats? Sengl asserts, “They [rats] bear a resemblance to us. They are certainly the most selfish creatures, thinking of themselves first. . . . It is not for nothing we humans are both extremely afraid of rats and disgusted by them, but we also use them in order to pursue advances in research.” (Quoted in Perloff essay.) Rats carry the symbolic weight of being both disease-carriers and the instruments by which to cure disease.

The Visual Guide has included several critical essays along with photographs of the rat dioramas depicting the acts of Last Days of Mankind. Also included are Sengl’s pen and ink drawings she used as a means to design the scenarios.

The essays have been written by Kraus scholars like the aforementioned Marjorie Perloff, Matthias Goldmann, and Anna C. Souchuk. Paul Reitter provides an Afterword focusing on Karl Kraus and animals.

These essays contextualize Sengl’s work within the context of Karl Kraus’ oeuvre and the philosophical and aesthetic implications of using taxidermied animals. Sengl’s practice focuses on the use of taxidermied animals. Previous pieces have included creating anthropomorphized sculptures with hybridized bodies. “Von Schafen under Wolfen” (Of Sheep and Wolves) is a 2008 artwork where a priest figure folds his hands but has a sheep’s head and a wolf’s snout.

The Last Days of Mankind, over its lengthy run time, has numerous characters and uses photomontage and verbal collage to show man’s degradation of language in mass media and war propaganda. Kraus, publisher of Die Fackel (The Torch), stood alone among his fellow journalists in his calls for pacifism during the First World War. His play exposes how the mass media exploits mass hysteria for its own ends and the worst aspects of human behavior. In the play, the Grumbler stands in for Kraus. Among all the white mice, Sengl symbolizes the Grumbler as a black rat.

Sengl’s art itself plays with the tensions of life and death in her use of taxidermied rats. These once living animals are now turned into frozen props for a play that is all about death. Unlike purely biological or zoological taxidermy dioramas, these rats are anthropomorphized, mimicking human activities in miniature. (Sengl had the rats prepared by others while she fashioned the rat-sized props.) The initial reaction to seeing the white rats wearing the tiny corsets and holding rat-sized guns results in deeply conflicted emotions. Cuteness and horror collide in these miniature scenes.

“Immersing Karl Kraus’ play in silence creates a powerful image that brings to the fore the element of not speaking that is not only at the heart of the collage technique but largely came to define Kraus’ role in the decade after the war,” Matthias Goldmann writes in “The Document Is a Figure.” Goldmann links Kraus’ admonition, “Let him who has something to say come forward and be silent,” with Sengl’s artistic practice “that play with forms of identity, deception, camouflage, and disguise.”

In Sengl’s preparatory drawings, the rats possess different colors. The sculpture further strips this differentiation away, making them an antiseptic white. The uniform whiteness (save for the Grumbler, the lone black rat) exposes the herd-like behavior of soldiers, citizens, journalists, war profiteers, merchants, and royalty. All become culpable in the unimaginable horrors of the First World War. No one remains unscathed.

Deborah Sengl continues the legacy of acid-tongued Austrian artists from Kraus and Kafka to more contemporary voices like Thomas Bernhard and Elfriede Jelinek. Her adaptation of Kraus’ war epic, the Last Days of Mankind, make it more accessible to audiences and helps to render the experimental play into a more comprehensible whole.