The Last Days of Ellis Island 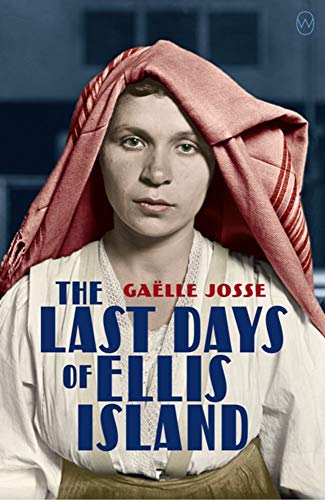 “a novel that explores the nostalgia, loneliness, guilt, and conflicted patriotism of the (fictitious) last American who worked at the facility.”

To Americans, Ellis Island is a majestic symbol of the myth of the national melting pot, a myth that has become especially fraught now as immigration has become a political argument.

So perhaps it’s fitting that a non-American—the French poet and novelist Gaelle Josse—has written a novel that explores the nostalgia, loneliness, guilt, and conflicted patriotism of the (fictitious) last American who worked at the facility before it ceased operations in November 1954. That evocative but too-abbreviated novel, whicht won two literary awards in Europe, is The Last Days of Ellis Island, translated by Natasha Lehrer.

“Ellis Island resembled nothing so much as a . . . factory chain turning raw materials into finished products,” muses the protagonist, Station Commissioner John Mitchell. “Immigrants were plunged into the crucible that was Ellis, a gigantic baptismal font, to walk out as American citizens.”

In the narrative, Mitchell never explains why he initially takes a job as an immigration inspector, but he rises through the ranks fairly rapidly to the top position, which requires him to live on the island. He also marries a nurse at the facility, Liz McPherson, the younger sister of his only friend. And for a few brief years, the island’s 27 acres encompass all he could ask for in life.

Then Liz dies of typhus, contracted from an immigrant who arrived on an infected ship. Torn apart by grief, Mitchell drowns himself in his work, rarely budging off the island or even talking to anyone.

“I had locked myself into my silence and pain and made it impossible for me to see or accept the slightest sign of concern or sympathy,” he writes in the journal he has decided to keep during his last nine days on duty.  Even the major headlines of the 1920s, such as Prohibition and the rise of the Mafia, “reached me like the echo of a world that was no longer mine.”

He is abruptly jerked out of his isolation in April 1923 by the plight of Nella Casarini, a young Italian immigrant whose brother is being crudely separated from her, to be sent back to Italy on the grounds of “mental deficiency.”

As he offers Nella a blanket, then personally investigates her case, then invites her into his private office, Mitchell knows he is going dangerously far beyond the boundaries of his job. “The distinction between what was good, evil, lawful, or forbidden has no meaning for me. In a few minutes, Nella had taken possession of my whole world.”

Mitchell also violates the rules with another passenger from Nella’s ship, clearing the man to enter the U.S. even though he is being sought back in Italy as an anarchist.

Out of guilt for these two lapses, Mitchell writes. “I became a zealous hunter of Reds. I believed that this way I might redeem myself, for the good of my country and the honor of my uniform.”

However, the harsh federal immigration law of 1924 turned off the spigot to Ellis Island. The mammoth processing building limped along for another three decades as, among other things, a detention and deportation center for illegal immigrants, a World War II military hospital, and a Coast Guard training center.

Now, as he writes his journal, Mitchell reluctantly prepares for the arrival of the ferry that will bear him away for the last time. All around him, “grasses and plants have grown wild, taken seed, borne by the wind and the birds. It wouldn’t take much for a meadow to grow up here, untamed, along the water’s edge, watched over from a distance by a triumphant Liberty tethered securely to her rock,” he thinks.

At barely 200 pages of large-size type, The Last Days of Ellis Island is so short that the sparseness must have been deliberate. Yet the brevity is ultimately dissatisfying.

If Mitchell was so wrapped up in Ellis Island during his 45 years there, he certainly should have memories of more than three immigrants and two fellow employees. What was the daily routine in that self-contained world? How did they cope when storms stranded the ferries? What were Mitchell’s feelings at each step downward, as his beloved facility slid from importance?

Instead of getting those insights, the book spends six precious pages on the World War II combat death of his nephew, an interlude that feels tacked on to show Mitchell in a wider context.

Luckily, the brief portrayal of Mitchell that exists is pungent and often lyrical.

Even as he parrots the myth that Ellis Island turns “raw material” into citizens, Mitchell knows that’s only partly true. He has averted his eyes from the would-be Americans who are rejected, including some, like a famous Hungarian anti-communist dissident, whom he personally turns away.

In his conflicting feelings toward Ellis Island and the immigrants, Mitchell mirrors the historical U.S. attitude—both welcoming and wall-building.