Last Call at the Oasis: The Global Water Crisis and Where We Go from Here 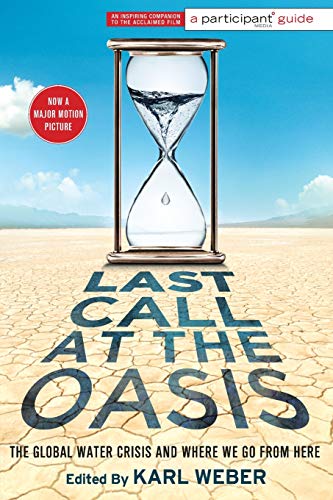 “. . . readers will walk away looking at water infrastructure in new ways . . . as a call to action.”

The mission of Last Call at the Oasis (and the eponymous companion movie) is to take average citizens on a longer journey from the snow packs of California mountains to the public water taps of Indian slums and to pose the question: “How have we humans allowed ourselves to reach such a crisis point with one of the most vital necessities of life?”

It’s a massive undertaking that occasionally stumbles due to the sheer size of its subject, but both newbies coming fresh to the book from their local multiplex and activists who have dedicated years to protecting our most precious resource will find essays in the collection that challenge and inspire them.

Last Call at the Oasis is designed as a companion to the upcoming film and is the latest release by Participant Media. Like previous Participant offerings—Food, Inc. and Waiting for Superman—Last Call is intended to spur readers and moviegoers to take action on the growing water crisis.

The book is arranged into three parts with parts one and two laying out a collection of thirteen essays from various expert authors and part three offering a list of nonprofit websites and academic resources as a tool for readers inspired to do more.

As a reference for readers experienced in water activism, Last Call frequently shines. Even seasoned anti-factory farming activists, for example, will find themselves viscerally cringing at Lynn Henning’s description of life on a family farm surrounded by manure lagoons in the book’s third essay, “From Farmer to Water Activist.” Her tales of back road car chases and “midnight poop runs” (which is, of course, the technical terminology for collecting evidence of illegal manure spreading late at night) make for an entertaining and uplifting read.

“Drawing Water,” the fine essay by Hadley Arnold and Peter Arnold of the Arid Lands Institute, reinvents the traditional concept of water conservation by asking the reader to consider the inherent insanity of California’s water infrastructure.

On one end, massive quantities of energy transport water from snowmelt in the northern Sierra mountains to Southern California. On the other end, towns and cities are designed to move storm water out to sea as quickly as possible. The authors advise planners to rationalize their water systems by finding ways to capture and use this storm water rather than fight gravity with energy to move water over mountain ranges.

For activists who are already aware of the low-hanging fruit of water conservation, this essay is a tantalizing introduction to rethinking infrastructure on a larger scale.

In “In Our Lifetime,” Gary White, the CEO and cofounder of water.org, explains how microfinance rather than charity can clear the way to expanding access to clean, potable water in developing countries. He exhorts Western readers to think of most of the 1 billion people lacking a reliable water source as customers currently forced into poorly functioning and often corrupt water markets who are willing and able to pay for a home water connection if given the opportunity.

Like most of the contributors to Last Call, Mr. White offers not just a fresh perspective on an old image—that of poor people struggling to fill jugs of fetid water—but also offers a solution that is incredibly easy for readers to plug into. I found myself exploring water.org immediately after finishing his chapter.

What readers might find frustrating about Last Call is the lack of a clear narrative connecting the thought-provoking essays together. The breadth of the topic that Karl Weber intends to tackle is massive, and it is not made clear how he decided which essays and topics made the cut.

While most of the essays are deep examinations of complex social and economic policy, the final two, “Ten Simple Ways You Can Help Protect Our Water” and “Nine Ecofabulous Ways to Save Water at Home,” seem out of place. While the “Ten Simple Ways” is both user-friendly and extremely practical, any reader who pushed through the ramifications of low water pricing in previous essays may already know that they should turn the water off while they brush their teeth.

On the other hand, many of the “ecofabulous” ideas seem overly expensive with lead-ins such as, “Next time you need to replace a toilet . . .” At a time when many Americans are financially hurting, suggesting they replace their sinks and toilets makes ripe fodder for cable news hosts eager to paint water conservation as a luxury for out-of-touch elites.

For those interested in the recommended $350–$465 rainwater collection units, Rutgers University offers build-a-barrel workshops for $45, and you can fabulosify your barrel with some paint and creativity.

Overall, Last Call at the Oasis achieves Participant Media’s goal of engaging citizens in a much-needed national conversation about water. The book makes the complex issue accessible, but not at the expense of depth or details.

While as a collection the group of essays seems assembled somewhat at random, the individual works are, for the most part, well-crafted arguments from authors who are experts in their fields.

Undertaking a topic of this size is challenging, yet readers will walk away looking at water infrastructure in new ways: “. . . flood as opportunity, surface as sponge, roof as cup, waste as sustenance, city as farm”—and the book itself as a call to action.

Kerry Doyle has worked for the last seven years as an environmental and water activist. She holds a B.A. in government from Wesleyan University.