This Land Is Their Land: The Wampanoag Indians, Plymouth Colony, and the Troubled History of Thanksgiving 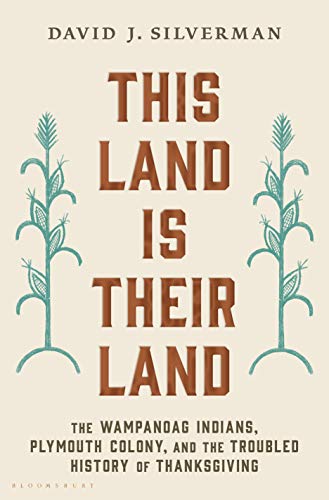 By now, everyone should be familiar with the almost universally ugly, sordid history of white/European relations with the Native peoples of North America; how they were dispossessed of their land, corrupted, defrauded, abused, killed, and had their culture destroyed through the white man’s racism, machinations, diseases, superior technology, etc.

This publication establishes not only that initial pattern beginning with the first contacts with European trading vessels, the arrival of the Mayflower and the Pilgrim settlement of Plymouth in 1620, but also tells the history of the Wampanoag Indians and their inclusion in the First Thanksgiving myth evolution that they have been recognizing in recent years as a Day of Mourning for themselves and all other Native peoples.

Those first contacts with European traders were a “good news, bad news” scenario. Making landfall in the late 1500s and early 1600s, they had knives, axes, and other tools, resources and materials that the Natives coveted in exchange primarily for beaver pelts. However, sometimes the traders decided on human cargo to take back to Europe for sale.

This helps explain why the Wampanoags were initially reticent to have anything to do with the Mayflower’s passengers, which occurred in the immediate aftermath of a three-year plague that decimated Native populations, and especially when they stole stored Native corn reserves and desecrated their burial sites.

Eventually, relations were established on a basis, or so the Natives thought, of equality and mutual support and cooperation. This assumed defensive help against other Native groups with which the Wampanoags were occasionally in conflict.

In exchange, the Pilgrims received guidance on planting corn and hunting wild game and were allowed to settle a small area, what became Plymouth, within Wampanoag purview. As long as English numbers remained small, there was general amity and friendly relations between them.

However, as English numbers rose, largely through natural increase but some additional immigrants as well, prejudice and white supremacy reared their ugly heads, and Wampanoags suddenly found themselves beholden to their “guests” to the point where conflict was inevitable. Nor did it always help to “join ’em” as fellow Christians, considering English prejudice against the “savages.”

As a result of indebtedness and court fines for crimes against English persons, property or livestock, the Natives were only able to discharge their obligations through land cessions, indentured servitude, and even sometimes selling themselves and/or their children, or being sold by court verdict into outright slavery, mostly to Caribbean island plantations.

Legal complications, as noted above, occurred despite the compact terms agreed to between them. With the Pilgrims’ superior technology such as knives, axes, muskets, and gunpowder, there was little hope in overcoming them. Needless to say, courts and juries were stacked against them with virtually no hope of justice, redress, restitution, or means of enforcing the previously agreed upon terms of their compact.

After 50 or so years of relatively cordial relations, New England found itself in the midst of King Phillip’s War, delineated by the Christian name of a son of the sachem or Native leader who had signed the original “treaty” with the English. Not surprisingly, English technology and a successful divide-and-conquer strategy in terms of other Native groups marked the end of any notion of equality and mutual cooperation between them.

With their lands largely gone (and those that remained were essentially the first reservations), wild game and other natural resources decimated, and their numbers devastated by additional epidemic disease, the Wampanoags were mostly reduced to being sailors, soldiers, and small farmers to make their way in the world in the following centuries.

As it turns out, they have seen a resurgence in recent years seeking to regain at least some of what they have lost. They have been officially recognized as a tribe by the Federal government and regained some of their culture and even language fluency.

This publication is well researched and includes many contemporary illustrations and maps as well as a glossary of key native people and places referenced in the text. It should be required reading for how not to treat indigenous peoples.

Although this has somewhat of a limited happy ending for the Wampanoags, it cannot make up for what was done to them. It certainly set the tone for what happened to other Native groups who suffered for our Manifest Destiny.