A Land of Permanent Goodbyes 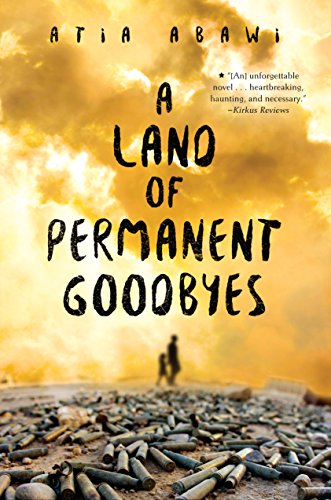 Atia Abawi, a journalist and an Afghan refugee who made it to Germany as a child, has written a deeply gripping and affecting novel about the global refugee crisis that continues across Europe today. Told through the experience of one family fleeing Syria—or more accurately, the family members who survive a bombing and are able to flee—she captures the whole of the disaster that most of us only dare to read about or stare briefly at on Facebook pictures, until we stop reading and looking because the situation is unbearable.

Using Destiny as her omniscient narrator, a clever device that works, allows Abawi to reflect on the 21st century drama in a way that is universal and transcends time and culture.

Here, for example, is Destiny on what happens when people bear witness to atrocities: “When a heart is clean but the eyes bear witness to such atrocities, the body falls into survival mode. Oftentimes there is numbness, followed by confusion and hopelessness. This is a feeling that has been shared by thousands of years of humanity in various parts of your world. It doesn’t change.”

Abawi is just as skillful when she describes the central character, Tareq, as he remembers what life was like before war overtook Syria. “Tareq remembered a simple city that was full of energy. But now he saw the damage that befell his hometown. Bombed-out buildings and the smell of war. It’s an odor that has changed little through the ages – a recipe of dust, death, destruction and despair. It’s a stench that sticks in the noses of those who’ve inhaled the vile concoction, and it never leaves, always finding a way to return in a dream, a memory or even in a time of joy, when it manages to slip forward and harass you, a painful reminder of the moments, the parts of your soul, that were stolen and replaced with anguish.”

The story revolves around Tareq, teenage son in a loving family, who has survived a bombing that kills his mother, sister, and twin baby brothers. With his father and little sister, he makes his way to his uncle’s home in the dangerous city of Raqqa before departing with his sister in an attempt to get to Turkey, and Greece, and then Germany.

The story of what happens to them is archetypal, full of villains who exploit the suffering of refugees, and mentors who help them as they survive one obstacle after another, including the trauma of crossing a rough Aegean Sea in a dinghy meant for 15 people that is carrying 50.

But this is not a story of ancient mythology. It is a real and present story of people fleeing violence and oppression and it is going on right now. That is what makes it so gripping, and at times so hard to read, never more so than when Tareq witnesses the death of mothers and children on the smuggler’s boat, nearly drowns himself, and briefly loses his little sister to traffickers when they reach Greece.

This is not melodrama for the sake of storytelling. It is a story rich in verisimilitude about what is happening to real people who once had lives not so different from our own. It is a story of suffering and survival in places most readers cannot imagine and it is a reminder of the perils of war, no matter where and when they happen.

Tareq and his sister are among the lucky ones. They make it to Germany where they learn that a brother has survived the war, too. He and their father are likely to reunite with them, but who can say when?

By the time they reach Germany, the attitude toward refugees has shifted from compassion to suspicion. Life, precious life, remains hard. Tareq wishes he could tell those who eye him with contempt, “We are broken people who are haunted by our past, our future and our dreams. We narrowly escaped death, the war, the rapes, the murderers and the killers—we have family who didn’t—please don’t let those monsters represent us. We swam through out county’s blood . . . to survive and live another day. We left our homes, we left our history. We left our loved ones without the time to mourn them. . . . We didn’t come here to harm you, we’ve come to heal.”

Who can read that without weeping?

The closing words of this beautifully crafted, page-turning novel belong to Destiny and to the author. “These people are fragile vessels, almost like eggshells, empty and isolated,” Destiny says. “Drained. And like a newborn baby, each vessel needs to be filled properly. When kindness and love and understanding are poured into them, a solid foundation is created, building sturdy citizens who can do wonders for those around them.”

But the final words are Abawi’s, although Destiny speaks them. “There are millions of Tareqs, Susans and Fayeds, all in search of safety and kindness. I hope you will provide that warmth, be that helper, do what you can to make that world a better place.”

How could anyone who reads this moving yet hopeful book not want to make the world a better place?