Land: How the Hunger for Ownership Shaped the Modern World 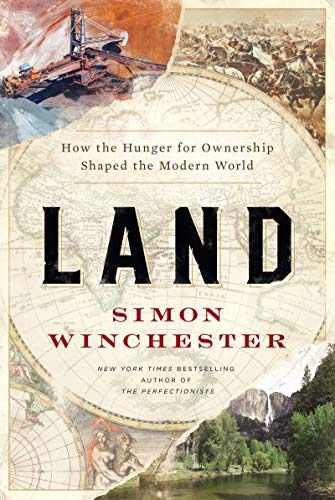 The question of land—how we understand it, who controls it, how it’s been distributed/claimed/seized historically, and how climate change will alter it—is a crucial one. Simon Winchester’s new book Land: How the Hunger for Ownership Shaped the Modern World promises to offer real insights into these questions. However, it utterly fails to deliver on those promises.

Winchester’s undertaking is undermined from its outset by problems of scope. It’s virtually impossible to discuss land from a global perspective in a single book, however long. In trying to encompass the planet, Winchester inevitably simplifies and universalizes based on European and American settler patterns, and in doing so he undermines even his strongest points.

Land is among the most political of all topics. Power in the modern world emerges not only from land ownership but also from the philosophies that construct land as something which can and should be owned. For centuries in European discourse, land has stood in for wealth, value, and status, and that discourse was carried across the planet by colonialism. Thus, it seems crucial that we should begin any real discussion of land by examining that philosophy, and by contrasting it with cultural philosophies which explicitly do not envision land primarily in terms of private property.

The closest that Winchester comes to this is when briefly identifies the Mohicans, an indigenous Algonquin nation whose traditional lands Winchester purchases a segment of for himself in the book’s self-congratulatory first chapter: “I had just purchased a piece of the United States of America. A morsel of the continent now belonged, exclusively, to me.” He goes on to remark that his family history in England is one of “respectable impoverishment,” and delights that America (of which he shortly after becomes a citizen) allows him this opportunity.

The fact that he has just re-enacted the colonial process seems completely lost on Winchester. He subsequently remarks that “Little more than the vaguest shadows of Native American occupation, centuries-long perhaps, maybe even millennia-long, can be discerned or surmised, even though she would be, should by right and human decency be, the true owners of the land.” This use of the vanishing Native American trope encapsulates the book’s failure to engage with indigenous knowledge and scholarship. This sentimental commentary on the moral wrongness (but apparent inevitability) of indigenous dispossession and relocation treats colonization as a kind of necessary evil whose aftereffects are largely inconsequential.

The book’s introductory discussion of agriculture’s effects on land division and ideas of ownership is strong largely because it focuses on Bronze Age England and a handful of cultures following similar patterns: “the Mesopotamian wetlands between the Tigris and Euphrates Rivers . . . the Great Rift Valley of easter Africa, . . . the loess barrens of early China’s Yellow River.”

Absent are the indigenous peoples of eastern North American (whom Winchester acknowledges as farmers), or the nomadic populations of sub-Saharan Africa, Arabia, Australia, and Turtle Island. Winchester’s assumption that cultures without settled agriculture have no complex relation to the land is both inaccurate and profoundly out of step with the past half century of scholarship and discourse on the subject.

His discussion of national borders is equally simplistic and narrow. Winchester treats national borders as vaguely absurd but doesn’t acknowledge the historical and political forces that create these borders. Of the Indian-Pakistani border, he writes, “this demarcation of land in the Punjab should in principle be very little different from the separation of the furrows and fields back in . . . England, four thousand years before. . . . But here and now, politics has intruded.” These “politics” he characterizes as absurd and alien, using language that might easily have been lifted straight from Kipling: “The Indian government, its local officials high-caste babus seemingly schooled in the minutiae of pedantic exactitude, was especially harsh in enforcing its own immigration rules.”

While there are chapters that offer some acknowledgement of colonialism and decolonization, such as “Māori in Arcady,” they remain simplistic and settler-oriented. The queen’s royal apology for land confiscation in 1995 is treated as remarkable and delightful: “Seldom does a sovereign ever say sorry; the Maoris took her doing so in 1995 seriously, and with much solemnity and gratitude.” While such apologies (which are now part of Commonwealth culture) are appreciated, they are far from restorative, and a serious discussion of such gestures needs avoid treating the colonized peoples are monolithic and grateful, and to acknowledge that apology is not restitution.

Many scholars are engaged today in discussions of land and its meaning. In colonized and post-colonial cultures around the world, discourse in academic and popular circles engages these topics. The question of land is not abstract, historical, or inevitable. It affects the lives of billions, and while the ideas behind land and land possession may seem absurd, they have undeniable material reality.

Winchester’s book, due to its famous author and high-profile release, is likely to be widely read, and this is genuinely unfortunate, because it adds nothing useful to the discussion and distracts new readers from thoughtful, engaged texts that might allow them to thoughtfully approach questions of land, territory, occupation, and possession.

Annette Lapointe holds a master’s degree in literary constructions of space and place, and her PhD studies encompassed space and place in Canadian literature. She is actively engaged in the discourse of decolonization and Indigenous land rights.