Lady Director: Adventures in Hollywood, Television and Beyond 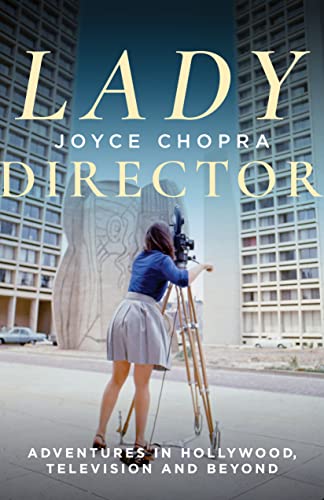 Joyce Chopra was part of a wave of women filmmakers who came to Hollywood in the ‘70s and ’80s, bringing with them fresh viewpoints and human stories. Her compatriots included Martha Coolidge, Claudia Weill, Amy Heckerling, and, more on the fringes, Penelope Spheeris. Bankable women directors have been as rare as female orchestra conductors, despite the proven abilities of international artists such as Agnès Varda and Lina Wertmuller. In the history of cinema, very few women have had the power to determine the images we see on the movie screen.

Today it is still a rarity to see a woman’s name under the Director credit for a feature film, notable exceptions being Kathryn Bigelow, Jane Campion, and Sarah Polley. Women—Mary Pickford, Katharine Hepburn, Marilyn Monroe—have been the lure to bring audiences into movie theaters, but men hold the fishing rods and count the receipts.

In this autobiography/memoir Chopra recounts her climb up the ladder of filmdom and back down, starting with her first job as an assistant editor on D. A. Pennebaker’s political documentary Primary, and culminating in her brief admission to the inner sanctum of Hollywood power brokers. The door briefly opened for her following the success of her first theatrical feature, Smooth Talk. The film starred Treat Williams and a then unknown Laura Dern coyly performing a drawn out seduction drama. Produced by American Playhouse for airing on PBS, the film was noticed in Hollywood after it was named Best Dramatic Feature at the Sundance Film Festival in 1986. Chopra was already 50 before her talent was recognized, a late start in Hollywood, even for a director.

This film demonstrated Chopra’s skill in drawing nuanced performances from actors and in building dramatic tension from subtle story elements. But her sensibilities were not appreciated or respected by industry producers with big egos, and after three false starts, she was shown the exit and spent the rest of her career working in the more confining and formulaic medium of television. This was a loss for her and for cinema.

The story of Chopra’s life and film career follows the outline of the generic Hollywood ascent—a mixture of talent, motivation, persistence, and luck, the luck not always being good. She was born during the Depression into a family of Russian Jews who lived on Coney Island. Her father Abe was a lawyer, mother Tillie a school teacher. As a child, Chopra was an avid moviegoer.

She began acting in high school, and continued to perform while studying Comparative Literature at Brandeis University. She studied in Paris for a year and, through exposure to the Cinematèque Française and the theorizing of the young film critics Francois Truffaut and Jean-Luc Godard, discovered the world of the European art film, with its emphasis on personal expression over genre formulas. After graduating from Brandeis she was invited to join the Neighborhood Playhouse in Manhattan, where she studied acting under Sanford Meisner and movement under Martha Graham.

Her film career began in 1960 when she landed a job assisting D. A. Pennebaker on his production of the groundbreaking documentary film Primary, about the presidential campaign of John F. Kennedy. For the next 20 years she continued working in the documentary field, relying on grants and funding from public television stations in New York and Boston.

Her first, and most successful, foray into theatrical feature filmmaking began in 1980 when she was 44, mother of a young girl, and married to her second husband, Tom Cole, a writer. She optioned a short story by Joyce Carol Oates and with her husband developed a screenplay that was produced by American Playhouse, a public television program designed to give voice to filmmakers working outside the Hollywood system.

The film became her calling card in Hollywood. But projects with James Brooks, Sydney Pollack, and Diane Keaton all fizzled, and Chopra retreated back to television, where she made a living, but rarely had the opportunity to fully display the gift for directing she had shown with Smooth Talk. At the end of her career, a woman in her eighties, she returned to documentaries where she had started, mentoring young female filmmakers in far off places such as India and Nicaragua.

Although described as a memoir, Lady Director is closer to autobiography. The story of her film career is accompanied by accounts of her personal life—her two marriages, emotional and physical traumas at the hands of males that scarred her, her devotion to her only child Sarah, and her upbringing on Coney Island.

If her story calls attention to the unfairness of a movie industry controlled by men and subject to male priorities and whims, her telling doesn’t convey the wrenching disappointment she must have felt that her potential was stymied.

Throughout her life, Chopra was at intervals abused by men, and this pattern could have been the basis for a dramatic story structure. As it is, the narrative is flat, often reading like an annotated catalog of her film credits, and burdened by her reliance on clichés to convey emotion. “I fell madly in love with her” refers to her three-year-old niece Jenny. “Tom and I couldn’t have been closer” describes the state of her marriage. Tom is “overjoyed with the news” that she is pregnant.

The problem with clichés is that they convey generic experience and remove the reader from the individuality of the speaker. Chopra lost her true voice in the cinema, and we don’t hear it in Lady Director, either.