Ladder to the Moon 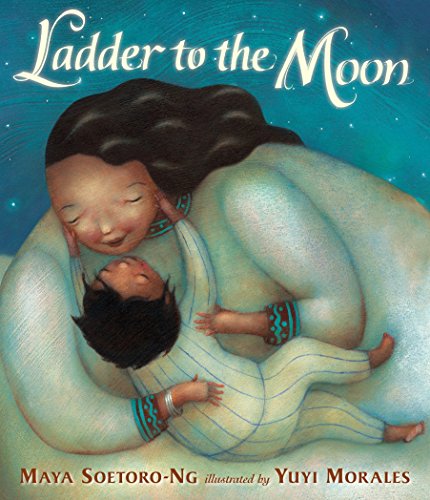 Upon first sight of Ladder to the Moon, the debut picture book by Maya Soetoro-Ng, one feels compelled to pick up and embrace the curvy cover image of a loving grandmother and her granddaughter. Surely, moonbeams and sweet dreams await readers as they open the page to yet another traditional, reassuring bedtime story.

The moon casts many spells, however, and this author has something more substantial in mind. Inspired by the many moonlit nights when Ann Dunham—mother of the author and of President Barack Obama—would tell her stories, Ms. Soetoro-Ng aims to launch a nurturing, intergenerational, and fantastical journey that will embrace the whole world, with its myriad woes and paths to wisdom. With a sure grasp of a folklorist’s narrative technique and with an educator’s understanding of a child’s need for optimism, Ms. Soetoro-Ng proves to be a worthy guide.

The journey begins with a curious little girl of ambiguous race named Suhaila asking her mama, “What was Grandma Annie like?” The child’s mother tells how Annie was “like the moon . . . full, soft, and curious. Your grandma would wrap her arms around the whole world if she could.” Hugging her daughter, she points out that Suhaila has hands like her grandmother.

After she goes to bed, the girl continues to think of her grandma, when suddenly, outside her window appears a golden ladder, with a woman’s sandaled feet descending the rungs. Perhaps the author pops in that magic a bit too quickly, but in this story, as in life, it is the process of discovery that matters.

Together, the two climb the ladder to the moon, where they can gaze down at the Earth. Under her grandmother’s tutelage, the girl will grow in wisdom and understanding. First, she listens to the moon’s songs, “and through listening, she knew more than she had known before.” After the two feel close, Grandma Annie urges her to observe various people in need of sustenance or help.

The reader is lured into this imaginative plot partly because of the radiant acrylic paintings by Yuyi Morales, three-time winner of the Pura Belpré prize. Using azure and warm golden hues, thick brush strokes, and swirling lines, she injects a sense of movement, mystery, and confidence into Ladder to the Moon.

From the two-page spread featuring the child and her grandmother, we follow their downward gaze as they see children struggling to survive a tsunami. Annie encourages them to swim, and then Suhaila, noting they have lots of room on the moon, asks if they may join them there. Morales’ fanciful two-page spread includes images of multiracial children with wings, swimming amid flying fish, stars, and a boat made of newspaper.

“I taste other troubles,” Grandma Annie whispered. Then “Suhaila tasted the air, too, and through tasting, she knew more than she had known before.” Next they see dusty, thirsty sisters of different races, who have survived an earthquake. The sisters join them on the moon and tell of other work that needs to be done. Annie promises, “We’ll throw in our hearts and minds, and work with our hands to make the land a little more kind.”

When next they look upon the Earth, Annie feels the faith of people praying for each other and for peace. And Suhaila, “through feeling, knew more than she had known before.” After these people of various faiths climb the ladder, they all sit around a fire and trade stories from many lands. Annie asks her granddaughter, “All these people who need us are people just like you and me, do you see?” And Suhaila, “through seeing, knew more than she had known before.”

What might first appear to be a simple bedtime book morphs into a story of strength discovered and strength bequeathed, a story steeped in the nourishment we gain from our ties to ancestors and to each other.

Ms. Soetoro-Ng, an educator with a Ph.D. in international comparative education, says her inspiration for this picture book grew from memories of her mother, who died of cancer before the author’s daughter, Suhaila, was born. She recalls in the author’s note how, as a nine-year-old in Java, her mother gave her a postcard of Georgia O’Keefe’s mystical painting “Ladder to the Moon.” The focus, she notes, is on the ladder, the path of discovery.

She has created a memorable and moving tribute to her mother and her daughters and, in the process, provides a soaring affirmation of our common humanity. Parents and grandparents will find much to enjoy and discuss in reading this gorgeous picture book to children ages four to eight.