A Lab of One's Own: One Woman's Personal Journey Through Sexism in Science 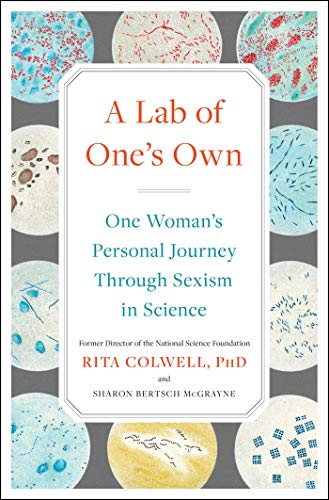 The title echoes Virginia Woolf’s non-negotiable insistence that a woman writer needs a “room of one’s own,” and at the same time reflects one of the academic detours that Rita Colwell took when blocked in her pursuit of science by prejudices against women’s presence and participation. When she finally found a PhD advisor to allow her to study the genetics of bacteria, marine bacteria in this case, (sometime in the late 1950s ?—a few more dates would be helpful in following her trajectory), she had already studied chemistry, English literature, bacteriology, medicine, and genetics. To the non-scientist English literature is the odd one out here, though the others seem related. It’s worth noting also that Colwell uses the acronym STEMM, with the last M standing for medicine, though Medicine is probably more usually subsumed under S for Science . . . as in the more usual acronym Science Technology Engineering and Mathematics (STEM).

Opposition to, and even ridicule of her work from leading scientists prompted a career switch to “vibrios, some of the most common bacteria in the aquatic environment,” which could be “dangerously pathogenic to humans” and at the same time “extraordinarily interesting.”

Subsequently, Colwell’s work on vibrio cholera led her to the important discovery of how and where cholera survives between epidemics. In the chapters on cholera and on her work on anthrax Colwell manages with her enthusiasm and vivid prose to share her elation and triumphs even with a non-scientist, though as she notes very often mere scientific success was never a guarantee of recognition, or a smooth upward progression up the career ladder comparable to that of male scientists similarly qualified. “My hard work, talent and new ideas backed by data—everything I thought would ensure my professional advancement—weren’t enough. . . . I decided it probably was best to move on.”

The issue of employment and other biases engaging American women in the ’60s and ’70s was slow to penetrate sexism in science, which was reflected most vividly in the flagrant system of separate academic tracks, PhD for men, MA for women; and the application of anti-nepotism laws to prevent the hiring of women scientists married to men scientists.

As Colwell notes, “the feminist movement was late in coming to science” and even in the ’70s and ’80s ,after the passage of Title IX, which made it illegal to discriminate against women in education, and gave women the power to sue universities and other employers, the “Age of Revolving Doors” allowed women to be employed and dispensed with as soon as conveniently possible, or alternatively to be kept in a post while blocking their advance.

Colwell acknowledges very early in her book that she has been helped by more male scientists than have hindered her; and conversely, that while she has enjoyed the sisterhood of “fellow” female scientists, some successful women scientists oppose measures to help other women as tokenistic and unnecessary.

She highlights the careers of a number of outstanding women scientists, as well as that of Ben A. Barres, a successful scientist, who transitioned from being Barbara, and found freedom and respect as a man. Barres has commented that “besides changing sex, the only time in my life I’ve taken an action that I thought might harm my career was when I decided to fight for the welfare of women in academia.”

“Nevertheless, the scientific enterprise remains a deeply conservative institution filled with powerful men—and some women—who reject outsiders, whether women of any stripe, African American men, Latinx, other people of color, immigrants, LGBTQ+ people, people with disabilities or anyone else who doesn’t fit the stereotype of the white male genius.” Colwell also discloses the names of some very famous scientists who have demonstrated misogyny and plagiarism against their female colleagues.

In her closing chapters—It’s Not Personal, It’s the System (chapter nine), and We Can Do This (chapter ten) Colwell advances a number of ideas and arguments for improving the situation of women in science, making clear that she regards their current inequality as “an institutional and social problem,” rather than being linked to “the Y chromosome.”

If scientists themselves are still advancing the Y chromosome as an argument for discrimination, that is indeed very alarming given current thinking on chromosomes.

While these closing chapters are not as polished as those preceding them they include some useful observations relative, for example, to anti-discrimination legislation being the bare minimum requirement for change; and to the need for scientists to stop being “unidimensional personalities” and to embrace the humanities as she has done, as well as learning about and working in administration, business, and politics. The era of the pure nerd seems happily to be over, at least in Colwell’s own lab.